(In this June edition of The Synn Report, Andy reviews the discography of Gigan.)

I try my best to keep things (relatively) fresh and exciting here at The Synn Report, and a big part of that is keeping things varied and different between editions. As such we’re taking a leap away from the monolithic fields of Post-Metal we explored with last month’s offering and jetting off into the bleed between dimensions in the company of Gigan and their mind-melting, brain-bending brand of calculated Tech-Death chaos.

Hailing from Chicago (by way, originally, of Tampa, Florida… something which potentially explains the undercurrent of semi-lucid lunacy present on every song), the three-piece clearly take a warped sense of pride in pushing Tech-Death into some truly weird and wonderful places, anchored by the unholy talents of multi-instrumental main-man Eric Hersemann, who not only handles 99% of the guitar-work across the band’s three albums, but also the bass, synths, theremin, and xylophone(!) to boot.

So, if you’re in a particularly masochistic mood, and fancy having your brain reduced to a quivering mass of over-cooked and over-stimulated neurons, then by all means, please click on… 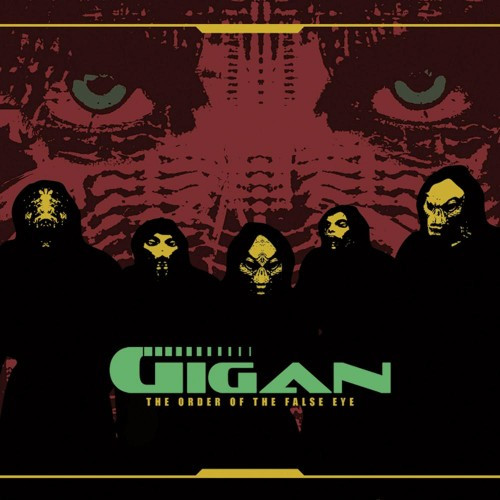 On initial impressions it may seem like opener “Undead Auditory Emanations” is simply an explosion of abstract aural chaos, but closer analysis will reveal a surprising number of nasty, neurotic hooks just beneath the surface, particularly in the track’s oddly jazz-infected second half. Similarly “Occult Rites of the Uumpluuy” immediately barrages you with its caustic vocals, clanging riffs and clattering drums, but also weaves a surprising amount of strange melody and memorable madness in amongst the cacophony.

“Still Image Symphony” plunges you even deeper into the insanity, Hersemann and Piro’s twisted, dissonant riffs swinging wildly from brain-scraping atonal aggression to eerie, distorted atmosphere (with just a hint of ugly, Death Metal groove on the side), after which the beefy, unsettling opening to “Imprisoned Within Duality” seems almost normal by comparison, eventually transitioning into a procession of flickering, rapid-eye-movement riffs and twitchy, tormented anti-melodies seemingly designed to both hypnotise and nauseate in equal measure.

With its eruptive, perception-distorting low-end and lancing stabs of disharmonic deviance, “Hiding Behind the House of Mirrors” is eight minutes of morbid drone and utterly catastrophic, speaker-destroying dissonance, while “Chrysalis” sounds a little like what might happen if you asked Gorguts to compose a new theme to Doctor Who whilst under the influence of some weapons-grade narcotics.

With “Interstellar Inversion of Consciousness” Gigan hit you with what might be their most “traditional” “song” yet… although those quotation marks should probably tell you that terms like “traditional” and “song” are definitely used in a slightly loose fashion here. That being said, there’s definitely something about the song’s off-kilter pneumatic chuggery and mangled blastbeats that feels a tiny iota more “accessible” than the majority of The Order of the False Eye… though, again, that’s all relative.

The band arguably save their best until last (or second-to-last, to be more accurate, as the final track on …False Eye is actually an untitled twenty-minute instrumental drone/ambient piece), as “Space Coffin Hallucinations” brings together some of the most chaotic yet catchy riffing and unconventionally infectious hooks on the entire record, whilst still maintaining an almost apocalyptic level of maddening intensity throughout. 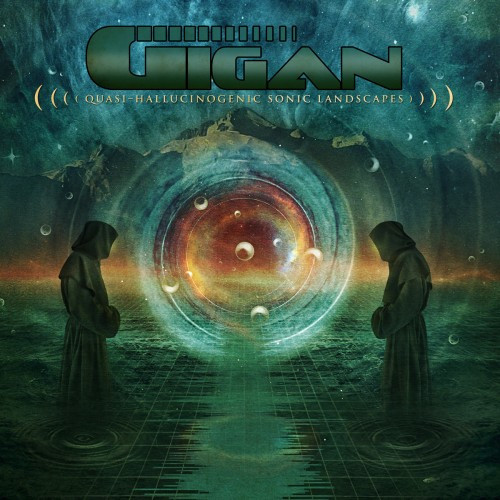 For album number two Gigan decided to take a step back and produce a record of contemplative acoustic ballads that… no, I’m kidding, Quasi-Hallucinogenic Sonic Landscapes is, if anything, even denser and harsher than its predecessor, maintaining the disturbing and unpredictable nature of the band’s music while simultaneously exchanging some of the scattershot wildness of their debut for a more focused and ferocious form of Machiavellian madness.

“Mountains Perched Like Beasts Awaiting the Attack” is an ear-gougingly harsh and angular opener that immediately showcases the mix of merciless aggression and psychopathic precision which underpins this album, its brutally barbed and corkscrewing riffs drilling their way incessantly into your skull even as its jittery, jarring drums threaten to knock your bones permanently out of alignment with a punishing series of gravity-distorting blastbeats and vertigo-inducing twists.

Follow-up “Suspended in Cubes of Torment” is the sound of Death Metal transmitted from some parallel, non-Euclidean dimension, composed of a series of disturbing, dissonant riffs that never quite seem fully human in nature or design, while “The Raven and the Crow” has a more progressive… dare I say, melodic?… bent to it, looping and congealing in strange, fungal threads over the course of six oddly compelling minutes.

The amazingly-titled “In The Tentacled Grasp of a Buried Behemoth” lurches and contorts with disturbing, discordant motion, spitting streams of fractal shrapnel and skittering, arachnoid blastbeats in all directions at once, while the multi-faceted “Transmogrification Into Bio-Luminoid” (again, what a title) showcases a much greater sense of focus and clarity in its construction, its pneumatically-triggered riffs and unconventional injections of droning ambience all pushing the song in one clear direction, leading to a shockingly progressive and melodic instrumental mid-section (and outro) which amply demonstrates that the band are capable of much more than just ruthless aggression and frenzied technicality.

Speaking of ruthless aggression… “Skeletons of Steel, Timber, and Blackened Granite” has it in spades, John Collett II’s monstrous growl running rampant over a neck-snapping array of spiraling, OTT drum parts and cataclysmic guitar work which sees Hersemann pushing his instrument(s) towards the breaking point. 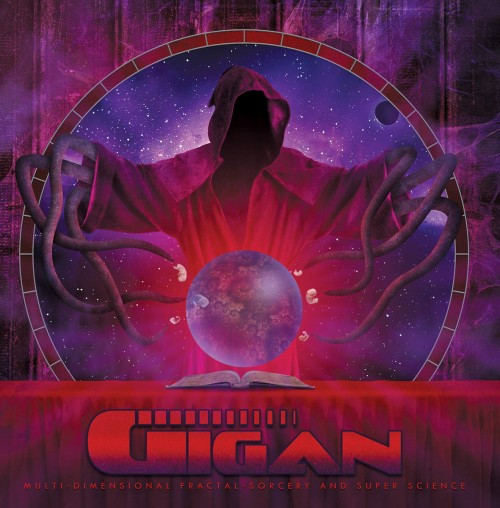 If you thought the band might “tone it down a little” with their third album… then you probably need your head examined. Though after listening to too much Gigan you might just need some serious therapy either way.

Kicking off with the nine-minute “Beneath The Sea of Tranquility”, Multi-Dimensional Fractal-Sorcery and Super Science (what a mouthful), immediately sets out its stall as a more progressive and enigmatic (though still brutally technical) album than its predecessors, demonstrating a more fluid and uncanny sense of dynamic, without skimping on the heaviness or the intensity.

After the slow-burn psychosis of the opener, the rampaging avant-garde Death Metal assault of “Influence Through Ritualistic Projection” sounds like pure pandemonium by comparison, scratching and scraping and blasting with reckless abandon as it transitions at near-warp-speed from one savagely sadistic contortion to the next, followed in swift succession by the psychedelic sonic psychosis of “Electro-Stimulated Hallucinatory Response”, which sounds a lot like what might happen if you took random elements of everyone from Gorguts to Neurosis, Necrophagist, early Mastodon, and The Dillinger Escape Plan, and put them all in a blender set to “annihilate”.

With a sound that’s about half a decibel away from provoking full involuntary bowel evacuation, “Mother of Toads” is a potential smash-hit if ever I’ve heard one, bursting at the seams with an obscene array of low-tuned, dense as dark matter, riffs and needling stabs of nerve-spasming, neurotic notes, all designed to penetrate and perforate your fragile human grey matter, after which the proggy, semi-ambient and drone-tinged introduction to “Obsidian Sun” is almost like a soothing balm to the senses.

Of course it soon erupts into a writhing conflagration of grumbling riffs and cruel, guttural vocals seemingly designed to test the capacity of your speakers (and your comprehension), eventually leading into the jerky hooks and tumultuous, twisting fretwork of “Cosmic Triangular Communication” and the pulverising, Ulcerate-esque strains of “Gibbering Hordes of Zemiath”, both of which are definitely amongst the best compositions (“songs” somehow feels inappropriate/insufficient) that the band have ever put their name to.

The album ends with the utterly merciless aural assault of “Bio-Engineered Molecular Abnormalities”, which is five minutes of distorted, deformed riffs and ugly, misshapen rhythms, all cavorting and copulating in the grip of a frenzied metallic panic as the song builds inevitably towards a suitably explosive (and messy) climax.