Although the focus of these Rearview Mirror posts is music from metal’s past, in my case it has also become a vehicle for discovery. Instead of writing only about songs and albums I’ve known about for years, the series has also given me an excuse to dig into albums I’d never heard (or even heard of) before, and that’s again true of today’s installment in the series.

Sorhin are a Swedish black metal band whose first demos were released in 1993 and 1994. Along with other short releases, Sorhin’s discography includes two albums, a debut full-length in 1997 named I det glimrande mörkrets djup and the remarkable album I’m featuring today, Apokalypsens Ängel from 2000.

The album was originally released on CD and LP by Svartvintras Productions. In 2008, it was remastered and reissued by Norma Evangelium Diaboli on 10″ double vinyl as part of a Sorhin box set called Förbannade år, and on CD in 2010.

I’ve forgotten how I came across Apokalypsens Ängel, but I listened to it for the first time yesterday — and it completely blew me away.

Like many albums (and perhaps especially black metal albums), it begins with an atmospheric introductory piece (“Inmarsch”), this one longer and better than most, but after that it’s an electrifying firestorm of sound right up to the solemn concluding bookend, “Utmarsch – Den Nya Messias”. 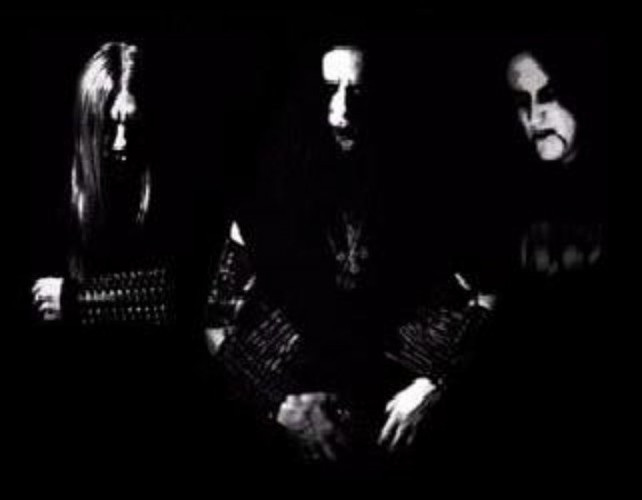 The vocals of frontman Nattfursth are vile and abrasive, with a kind of “I’m being strangled with barbed wire while vomiting bile!” quality. Their savagery suits the intensity of the music, and the drummer Zathanel (who also spent time in Setherial) also turns in a capable performance. But the star of this particular show is the guitarist (and bassist) Eparygon.

In a nutshell, this album is like a Fort Knox of riff gold. Along with the usual tornados of tremolo ripping, Eparygon also mixes in a big assortment of thrash, punk, and “classic” heavy metal riffing that compel headbanging. His guitar leads and solos are at a similarly high level of quality. And while most of the songs punch the pedal to the metal, “Moder Jord… Undergång Nalkas” shows that the band were capable of writing slower and more depressive tracks as well. In fact, the album is so successful in part because each song has its own identity, with enough dynamic changes of pace and mood to hold the listener’s interest all the way through.

I should also mention that the melodies in the songs will get their hooks into you as well — this isn’t just a pulse-pounding thrill ride, it’s also so catchy that you’ll want to come back to it. I sure as hell do (I’ve listened to it three times since yesterday, and it’s making it very difficult for me to move on to other things).

I do have a few favorites — in particular, “Livets Löfte” and “Ett Sista Monument Ståtligt” — but you really can’t go wrong picking any other song at random.

Below I’ve embedded a YouTube stream of “Livets Löfte” as well as a full-album stream. The index to the songs, included with the album stream, is as follows:

Finally, I’ve also included a video of the band performing the title track to their 1994 demo I fullmånens dystra sken. The sound quality isn’t great, but it’s good enough to appreciate the lights-out performance by the drummer.

Sorhin haven’t released any new music since a 2002 split with Puissance, although Metal-Archives classifies Sorhin as “on hold”. Whether Sorhin ever release anything else, Apokalypsens Ängel cements their legacy as a band well worth remembering and revisiting.

UPDATE:  Today (June 24) I discovered a June 8 interview of Nattfursth posted in Bardo Methodology on June 8 which revealed that Sorhin now plan to release new material of some kind, perhaps beginning with a split release with a Swedish black metal band from the same generation as Sorhin. Exciting news…

11 Responses to “THE REARVIEW MIRROR (SORHIN)”