Harakiri For the Sky’s last album Aokigahara, released in 2014, was a revelation — a powerful amalgamation of black metal and atmospheric post-metal that was both blisteringly cathartic and achingly beautiful. To borrow the words of my comrade Andy Synn, “With an undeniable ear for bleak, evocative melody, an impressive array of gleaming lead guitar refrains, and a keen grasp of stellar songcraft, on record the group are a truly immersive experience.” No wonder that this Austrian duo’s new album III: Trauma has been one of our most highly anticipated 2016 releases.

The first advance track from the new album, “Calling the Rain”, was a sign that, if anything, the band may have exceeded the heights reached on Aokigahara. The song is an intense experience, a memoriam to the suicide of an old friend. It’s also intensely memorable, earning all of its 11+ minutes and somehow still ending too soon. And today we bring you the premiere of a lyric video for another song — “Funeral Dreams” — which is further proof that, as fine as Aokigahara was, III: Trauma is even better. 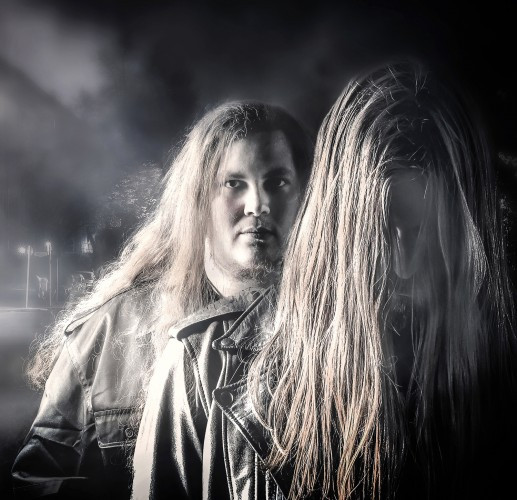 “Funeral Dreams” juxtaposes sensations of visceral, bone-jarring physicality and crystalline fragility, pairing moods of rage and anguish, despair and transcendence. Chiming melodic chords mix with raking riffs. Swirling mystical notes rise above pavement-pounding drum-and-bass rhythms and propulsive blasting. The music soars and glides, and it also crushes and seethes. The raw emotional power of the vocals is a match for the expressive intensity of the instrumental music. It’s also a song that has staying power; it resonates in the mind long after it reaches its conclusion.

The imagery in the video (directed by Andreas J. Borsodi) is also striking — and disturbing — a montage that graphically testifies to the seemingly unstoppable propensity of humankind to foul the planet and to slaughter, mutilate, and abuse each other — and to numb ourselves in various ways to the horrors and the pain we seem destined to continue inflicting. Together with the lyrics — which are traced throughout the video on such places as graffitied urban walls and type-written labels on pharmaceutical containers — it brings to mind not only the tragedy of destruction but also an idea captured in this quote from Norman Cousins: “The tragedy of life is not death but what we let die inside of us while we live.”

III: Trauma will be released by Art of Propaganda on July 22. The album was recorded by M.S. and Daniel Fellner and was mixed and mastered by Fellner. It features artwork by Tristan Svart — and you can pre-order it here:

For those who missed the album’s monumental first track, “Calling the Rain”, we’ve included a stream of it below our premiere of “Funeral Dreams”.

3 Responses to “AN NCS PREMIERE: HARAKIRI FOR THE SKY — “FUNERAL DREAMS””