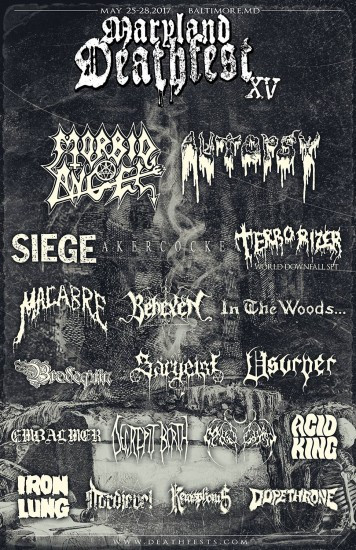 About 20 minutes ago the organizers of America’s finest metal festival announced the initial slate of bands confirmed to appear at next year’s installment of the festival — Maryland Deathfest XV. And here’s the list, pasted from MDF’s Facebook announcement:

There are a lot of very exciting names on this list, including the appearance of some recently revived and justly hallowed names (Akercocke and In the Woods…); some A-grade black metal bands (Behexen, Nightbringer, Nordjevel, and Sargeist); seminal and venerable groups such as Macabre, Terrorizer, Morbid Angel, and Autopsy; the resurgence of Decrepit Birth; and… well, you get the idea: I’m already highly stoked.

“A limited amount of early bird (4-day) passes go on sale today at 11 am EST. If you don’t get one of these before they sell out, more 4-day passes will be released at a later date.”