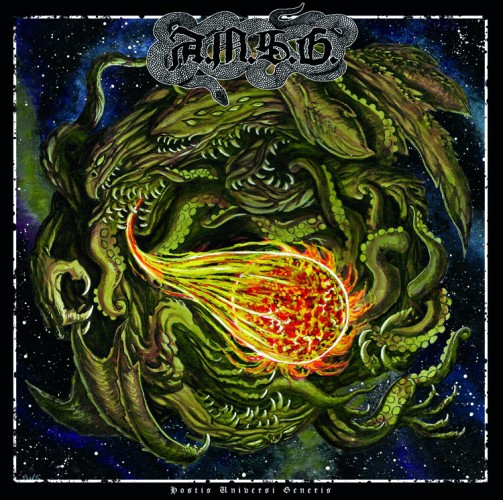 It’s safe to say that black metal is reaching more listeners than ever before. It’s also safe to say that what people understand by the term “black metal” is more varied than it has ever been — to the point that it’s no longer a terribly useful genre term. It has morphed into a signpost that marks the entrance to a sprawling city with many diverse communities (whose inhabitants don’t always want to have anything to do with their neighbors). So when I say that Hostis Universi Generis is one of the best, most intense, and most powerful black metal albums of the year, that requires some further explanation — perhaps especially for people who couldn’t get into this band’s debut album.

The animating philosophies behind A.M.S.G.’s music don’t appear to have changed significantly since 2013’s Anti-Cosmic Tyranny. The band still worship death. They still view the cosmos in its current incarnation as a failed experiment and yearn for its end, including all life within it; the new album’s title translates roughly to “the enemy of all”. And as their name (Ad Majorem Satanae Gloriam) signifies, they still offer their devotion to the greater glory of Satan.

But although the band’s inspirations and objectives may have remained fundamentally the same, the music has changed in important ways. Hostis Universi Generis is not simply a step ahead; it’s more like a giant leap forward. Even for those listeners who recoiled at Anti-Cosmic Tyranny, it’s time to put those memories aside and explore this new album with fresh ears. 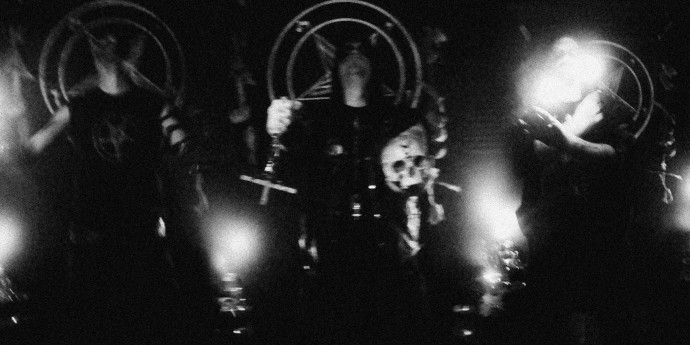 The two most immediately noticeable changes are in the vocals and the production quality. Although I found a lot to like in the first album when I reviewed it three years ago, I acknowledged that the vocals were “a croaking, corrosive, utterly rancid effusion of bile and vitriol” that would probably put most listeners off, including many devotees of black metal.

The vocals on the new album are still full of hate and fury, but the strangled croaking is largely gone, replaced with incendiary, electrifying shrieks that one imagines as a mix of sulfuric acid, straight razors, and ignited napalm. They will still make tender ears bleed, but they don’t detract from the music; instead, they amplify its intense power. And I would guess they’re much more in the wheelhouse of what most fans of extreme black metal want and expect.

The production also greatly magnifies the music’s impact. As compared to the relatively lo-fi quality of the debut, the sound on Hostis Universi Generis is sharper and often overpowering. In fact, the sheer force of the music is so compelling that by the end of the album’s six long songs and 63 minutes, you may be left battered and emotionally wrung out — yet also feeling vibrantly alive. (And if that doesn’t make much sense as you read the words, maybe you’ll understand the paradox better after you’ve become thoroughly immersed in the album.) 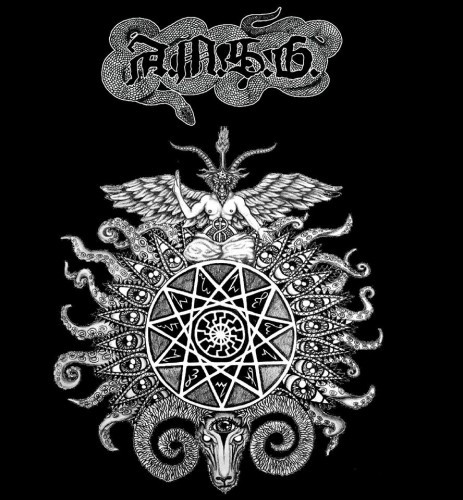 The album truly is an immersive and intense experience. It’s staggering in its heaviness, barbaric in its assaults, mind-bending in its atmosphere, and laced with exotic melodies that are as gripping as they are ominous and bleak. It spawns images of a world engulfed in flames beneath the spreading preternatural shadow of immense draconic wings of death, rising on columns of heat.

Although A.M.S.G. do dependably erupt in paroxysms of violence fed by blasting drums and shrouded in a dense haze of turbulent tremolo riffs, the music is more sweepingly dramatic (and even bombastic) than feral, more symphonic in its dense and elaborate textures than raw and bestial. There are slow, gargantuan doom riffs as well as scathing sandstorms of tremolo chords, solemn funereal laments in addition to frenzies of rapacious slaughtering.

And those descriptions still don’t exhaust the multifaceted aspects of this infernal pageant. In many respects, the music is eerie and unearthly. It crosses the line into experimental, avant-garde territory, especially in the immense 14-minute closing track, “Astral Projections of Lucifer”, whose dissonant, spectral melodies, shimmering astral ambient textures, and beautiful, chiming arpeggios make the song dreamlike as well as deeply dark and dire.

There’s also a saxophone in that closing track — at first plaintive and haunting, and later fiery and deranged. The sax also appears during “Divine. Madness. Transcends” in a solo that’s slow, soulful, and yet disturbing. That same song also includes one of the album’s most striking passages — an extended guitar solo near the end that at first is slow and majestic in its mournfulness and then grows increasingly intense and searing — capped by a somber piano solo.

The album’s multifarious textures also include frightening ambient sounds, storms of power electronics, ecclesiastical organ chords, the deep groan of a didgeridoo, and (as in the intro to “Broken Chains of Cursed Flesh”) sublime acoustic guitar instrumentals. There’s a comparable layering of textures in the vocals, with spoken-word samples, half-sung chants, acidic gasps, and demonic whispers to go along with those dominant, cauterizing shrieks. 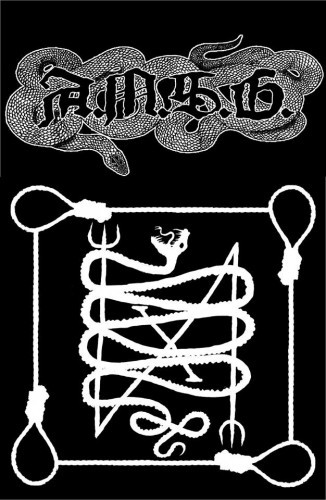 It would go way too far to say this album is “accessible”. Death looms over it like a formless, hungering presence from start to finish, and it’s almost unrelenting in its intensity. But I do expect this distinctive album, if given a chance, will claim a much wider and more devoted following than its predecessor. It really is very impressive, and well worth the attention of black metal fans, regardless of which neighborhood they occupy in the underground.

Hostis Universi Generis features artwork by Jef Whitehead of Leviathan. It will be released by Profound Lore Records on July 29. The CD edition is now available for pre-order from the PL web store and the label’s Bandcamp page, linked below. A vinyl edition is expected in late August. And a full stream awaits your attention below.