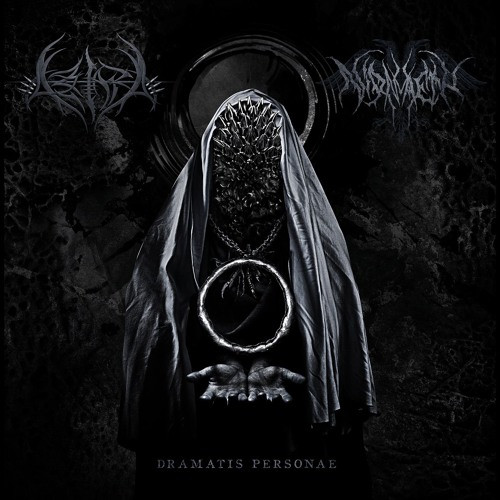 Earlier this month we reviewed an impressive new split by two experienced French bands from the black metal underground — Nirnaeth and Azziard. The split, which includes one exclusive song from each band, will be released on August 12 on 7″ vinyl by Kaotoxin Records — the first 7″ ever released by the label. Now we’re following that review with the premiere of a video for Nirnaeth’s powerful track, along with an interview of the band’s guitarist Mutill.

Nirnaeth, who took their name from the word for “Tears” in the elvish language of Sindarin from the works of J.R.R. Tolkien, began their existence roughly 15 years ago. Prior to this split, they released two albums, Thrown Athwart the Darkness in 2006 and Splendour of the Abyss in 2009. Their contribution to the split is a track called “Nihil in Me”, and it was was recorded during the pre-production process for a forthcoming third album. 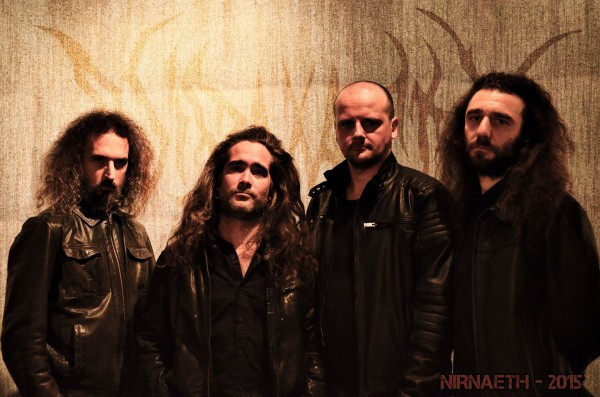 As we learned in the accompanying interview, this new album, like the first two, will tell a story, and “Nihil In Me” is a central part of that narrative — “where the body is regarded as a dam and the blood like a lake frustrated”. In this song, the story’s central character “decides to sabotage the dam in order to leave his body ‘as one leaves a scorched earth'”.

To represent this concept of a body as a dam, the video focuses on tight shots of faces and bodies — which intensifies an already intense performance.

The music itself is a turbocharged assault of gut-punching percussion and fierce riff swarms, with poisonous vocal vitriol. The chaotic torrent of black metal savagery is broken by a head-bobbing, hard-rocking interlude before the hell-ride resumes and rockets toward its conclusion.

To pre-order the split on collector’s edition white vinyl, go here, and a black vinyl limited edition is available here. It’s also available as a “name your price” download at this location (though it will obviously sound different from the version mastered for vinyl).

Enjoy the video below, and after that, check out our interview of Nirnaeth’s Mutill.

Thank you for making time for these questions. The new video is for a song from your split with Azziard, and it seems to be the first new music publicly released by Nirnaeth since Splendour of the Abyss seven long years ago. Why such a long gap, and what inspired Nirnaeth to begin writing and recording new music again after that long break?

Mutill: Hi. This long gap was imposed on us. Our previous drummer changed region and the geographical distance made the work very complicated. At the time I hesitated to continue writing for NIRNAETH. I lived that period like a slow death. Yamaël left the band, yet new ideas and songs continued to emerge. We started to look for another drummer, and after quite a long time Vagorn was recruited. Apart from his technical side he brought a new approach and does not hesitate to question certain choices.

Of course, every listener will respond to the song in their own way, but can you tell us the story behind the song — what it means to the band, and what you tried to represent through the lyrics and the music?

Mutill: Like our first two albums, the third one will tell a story. “Nihil In Me” is a central song of this story, where the body is regarded as a dam and the blood like a lake frustrated. The central character here decides to sabotage the dam in order to leave his body “as one leaves a scorched earth”.

What events led to this split with Azziard, and was “Nihil in Me” specifically recorded for the split?

Mutill: After the Gohelle Fest II we decided to record that song, with the will to produce a video clip of it: it was a way for us to say “NIRNAETH is still alive !”. Our first intention was to release the video in January. We looked to produce a vinyl by ourselves but it was too expensive for us. Then Kaotoxin offered us the split deal. We considered this as a good opportunity!

When was the song recorded? And is it a sign that Nirnaeth are planning to create a longer work in the near future?

Mutill: “Nihil In Me” was recorded in November. The third album is 90% composed, and we are eager to expose it to the Metal scene. I consider we still need more rehearsal work: I like to think that our songs are organic; they need to be fully understood and felt by all of us.

There are many superb French black metal and black/death bands active today. Although there is a lot of diversity in the music, I would guess that many fans outside of France probably first think of words like “dissonant” and “avant garde” when thinking of French metal in those genres. How do you see the character of Nirnaeth’s sound? How would you define the core elements of Nirnaeth’s metal?

Mutill: I do not consider us as an avant-garde band at all. We mostly listen to old school metal. To me, writing a song is describing a feeling, an atmosphere. I used to say that I try to reach “a color”. The most important thing to me is that a riff in a song cannot be the riff of another song. I demo all songs, we try it in rehearsal, and that’s where we are talking a lot! We always work to have structures in cohesion with what the song means, with the goal of being the most expressive and most effective.

Let’s talk about the new video for a few minutes. Who made it, and can you tell us where and how it was filmed and how long the filming took?

Mutill: A great friend of mine is the president of Bulldog Prod. I already had a kind of script and I knew what I wanted: in order to symbolize the dam concept I wanted very tight shots of bodies. So we prepared ourselves and the required material a few days before: everything was ready for the video. We filmed it in one day.

Do you have any interesting stories from the filming session, or was it mainly just long hours of tedious work?

Mutill: It was a very good day, in good company with a good creative spirit.

I’ve often wondered how bands are able to muster the energy and passion for a video shoot that they might feel on stage — when there’s no stage, no audience, and cameras in their faces? That didn’t seem to be a problem in this video. How did you and your bandmates manage it?

Mutill: Alcohol is our friend.

2 Responses to “AN NCS VIDEO PREMIERE (AND AN INTERVIEW): NIRNAETH — “NIHIL IN ME””