Last month we had the pleasure of premiering a song called “Cult of Shining Stars” from the first new album by Norway’s In the Woods… in 17 years. Entitled Pure, the return of this groundbreaking band will be released by Debemur Morti Productions in September. Today we present another new song — “Blue Oceans Rise (Like A War)” — and this time the music comes in the form of a video.

For those who may have missed our previous premiere, I’ll repeat just a small part of this band’s story. The original members of the group first played together in a death metal band called Green Carnation, but transitioned to In the Woods… after the departure of main composer and guitarist Tchort in order to take his place in Emperor. After the release of Strange In Stereo in 1999 (which followed 1997’s remarkable Omnio), Tchort returned to Green Carnation, and In the Woods… came to an end, with some of the members rejoining Green Carnation and others moving on to other personal projects. 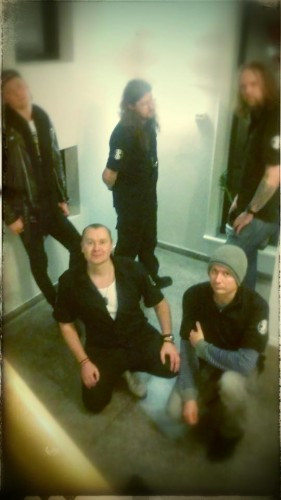 This new song is a mesmerizing piece, a sonic tapestry of gothic gloom that works its way into the mind like a cocktail of hallucinogens and narcotics. After the first song we premiered from the album (not to mention his work in other bands), James Fogarty doesn’t need to provide further proof that he has an evocative, spellbinding voice — but he does that here, giving the song an air of spectral beauty, which is further enhanced by the haunting keyboard melody and the haze of psychoactive guitars.

Although the song is an impressive piece of paranormal spellcasting, at the same time it generates an uneasy feeling of peril and impending doom, thanks in part to the gut-rumbling pulse of the bass, the heavy mallet blows of the riffs, and the ritualistic rumble of the drums.

The video, which was filmed by Fogarty, E. Wainberg, and J. Tilley and edited by Fogarty, interleaves scenes of the band performing with slow-motion imagery of heaving ocean swells and crashing waves.

Pure will be released by Debemur Morti on September 16, 2016. It’s available for pre-order at the DMP web shop in a variety of formats through the links below: