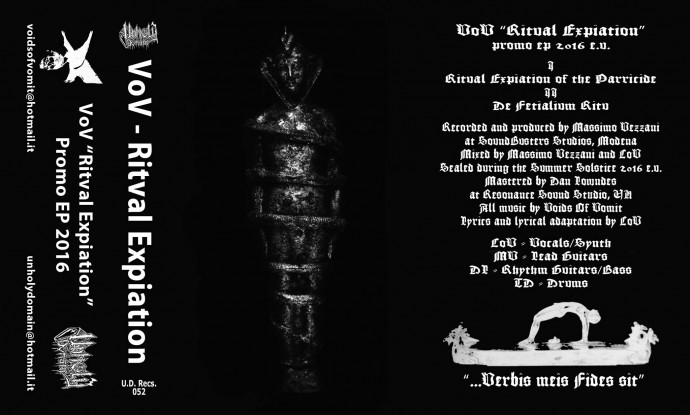 There are only two songs on this new EP by the two-man Italian band Voids of Vomit. Only two songs… but they are so good that my only criticism of what V.o.V. have done is that they didn’t do enough. Why couldn’t they have made three songs? Or four? Or six?

I am speaking selfishly, of course. Suppressing my own selfishness, I should simply be grateful for these two tracks… and indeed I am. I hope you enjoy them as much as I have, because after another few paragraphs you will find our premiere of the two songs on Ritval Expiation.

Voids of Vomit have previously released a 2006 debut demo, a 2008 split with Italy’s Morbid Tyrant, and an EP in 2010 (Veritas Vltima Vitae), and in the meantime they have performed with the likes of Asphyx, Deströyer 666, Sadistic Intent, Disma, Convulse, Diocletian, Archgoat, and Venom, and have made multiple festival appearances in Europe. But these two songs appear to be their first new recordings in six years. Having now discovered what V.o.V. can do, I hope the interval before their next release is much, much shorter.

The two tracks are “Ritval Expiation of the Parricid” and “De Fetialivm Ritv”. Voids of Vomit pay homage to the ancient death metal sound of such bands as Incantation, Grave, Nihilist, and Impetigo, but they also have an obvious talent for writing massively infectious, irresistibly headbangable riffs. And that becomes apparent within the first half-minute of the first track.

The deep, grinding guitar tone is titanic, the bass and drum rhythms make the earth quake, the vocals are cavernous and inhuman — and they also rise up in ghastly howls of bloodthirstiness or spew ghastly vomitous excretions of disgust. And when they finally unleash a guitar solo in the second track, it’s hot enough to burn off your eyelashes.

V.o.V. also mix up the tempos and rhythms to provide a dynamic expression of terror, moving from ghoulish, gloomy, mid-paced stomps to vicious, swarming rampages, to old-school d-beat-influenced romps — without ever losing the thick, choking atmosphere of malignancy that infests the songs from start to finish. Any fan of old school evil death metal should eat this up with both hands.

Rival Expiation will be released on August 20 in a limited tape edition by Unholy Domain Records, and the release will happen at the Navajo Calling Festival in Italy, where Voids of Vomit will perform with such bands as Bestial Raids, Incarceration, Wolfbrigade, and many more.