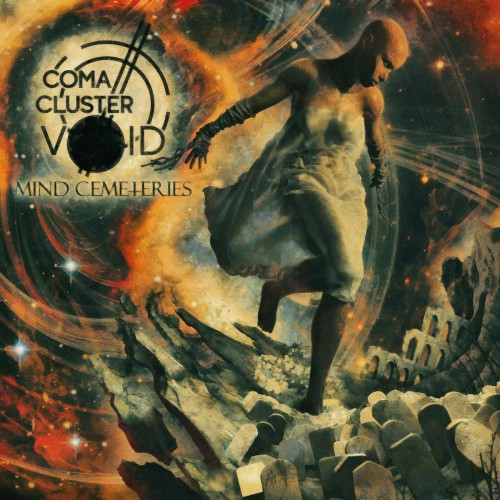 (Austin Weber arranged, and now introduces, our premiere of a song from the debut album by the multinational band Coma Cluster Void.)

While 2016 has been an exceptionally good year for quality metal releases so far, there’s one album I’ve been anxiously awaiting above almost all else, Coma Cluster Void’s debut full-length, Mind Cemeteries. Some of you may be familiar with the group from when we premiered the album’s title track here at NCS last year. Others still may have noticed that our esteemed editor placed the album on a list of his most anticipated 2016 releases back in January at NCS. It seems things have come full circle, as we get to debut another song by the band! The one we are premiering today is a ferocious ode to chaos and bleakness entitled “Iron Empress”.

From what the band told me, the song title is a reference to the foreboding being that adorns the cover art of the album, the Iron Empress on the cover standing in as a metaphor for the album’s concept and themes. Coma Cluster Void members John Strieder and Mike DiSalvo explained a bit about this in the following statement:

“Mind Cemeteries weaves a tale about the enigmatic Iron Empress; human misery, contempt and a depressive state of mind as a result of wars waged, creativity obliterated and humanity’s progress slowed down to a crawl; all nestled behind a maniacal tapestry of dissonant and chilling barrages of riffs and beats.”

That’s a pretty spot-on description for what “Iron Empress” consists of, which is an unorthodox form of death metal the likes of which I can’t say I’ve ever heard anything similar to before. It’s equal parts volatile chaos, unnerving “anti-grooves”, as the band puts it, and numerous unpredictable tempo shifts, all coalescing around a black hole of unearthly dissonance and raw pissed-off vocals. If you can imagine what it would sound like for Ion Dissonance, Meshuggah, and Deathspell Omega to join forces, the end result would be in the ballpark of what “Iron Empress” has to offer.

Coma Cluster Void’s Mind Cemeteries comes out on Friday, August 26th, and can be pre-ordered here: