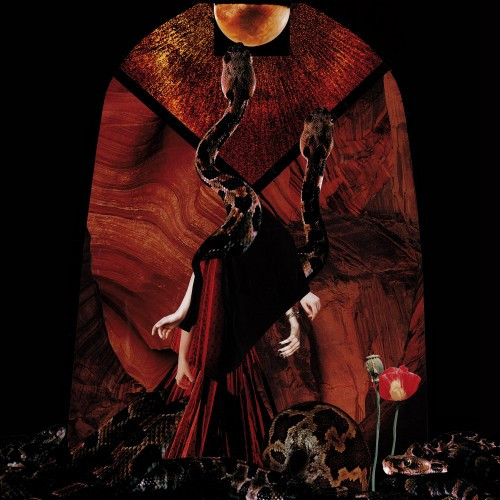 Serpent Ascending is the solo project of Finnish musician and vocalist Jarno Nurmi, who was once a member of Slugathor and Nerlich and remains one of the two members of Desecresy. Five years ago, I, Voidhanger Records released a collection of Serpent Ascending demo tracks under the title The Enigma Unsettled, and on September 16 it will be releasing the project’s full-length debut, Aṇaṅku.

The new album includes eight tracks in the range of two-to-five minutes, and today we bring you a stream of the opening song, “Entrance”.

The song’s lyrics paint vivid but cryptic visions, and include stanzas from “The Earth’s Answer” by William Blake. The music similarly has a mystical, hallucinatory aura, with rising and falling melodies that make use of dissonance yet deliver hooks that become memorable.

But this isn’t the kind of spellcasting that’s slow and reliant on ambient tones. Instead, the song is mainly fast and ferocious. It begins in pulse-quickening fashion with hammering drums and the cutting buzz of storming guitar, resolving into the gait of a loping beast where that dissonant melody rears its head like a great swaying serpent in a sandstorm.  The bursts of ravaging guitar frenzy reappear, their intensity amplified by Nurmi’s high, harrowing howls — but the texture of the song is made even more rich when Nurmi’s voice changes, and that change proves to be a very effective addition.

In short, this is an introduction to Aṇaṅku that’s both electrifying and enthralling, furious and fascinating. We’re very interested to hear more from the album, and hope you will be, too.

Aṇaṅku was recorded by Tommi Grönqvist and Jarno Nurmi and mastered by Patrick W. Engel at Temple Of Disharmony. It features cover art by art by Veera Pitkänen and logo and design by Francesco Gemelli. The album will be released by I, Voidhanger on September 16, and the track list is as follows:

Stream “Entrance” below, and after the player we have included the lyrics.

Queen of the seas – Let me drown in your fathoms

“Prisoned on watery shore,
Starry jealousy does keep my den Cold and hoar;
Weeping o’er,
I hear the father of the ancient men.”

“Break this heavy chain,
That does freeze my bones around!
Selfish, vain,
Eternal bane,
That free love with bondage bound.”