At the end of this post I’ve embedded five videos from Panopticon’s 90-minute set, and I’ve got one video of Vastum in here, too. By tomorrow, I also plan to update this post (and yesterday’s recap of Day One) with videos of additional bands. For now, I’m including the best of my crappy cellphone photos, and some words of course.

Speaking of words, I wrote the recap of the pre-fest show and Day One yesterday, i.e., on the morning of Day Two. It was really wordy. It was so wordy that by the time I finished it and picked the photos to include, I was late to the start of Day Two despite the fact that I skipped breakfast and lunch. I therefore missed the opening performance by Alaric, arriving just in time to catch the start of the second band on Saturday’s schedule. 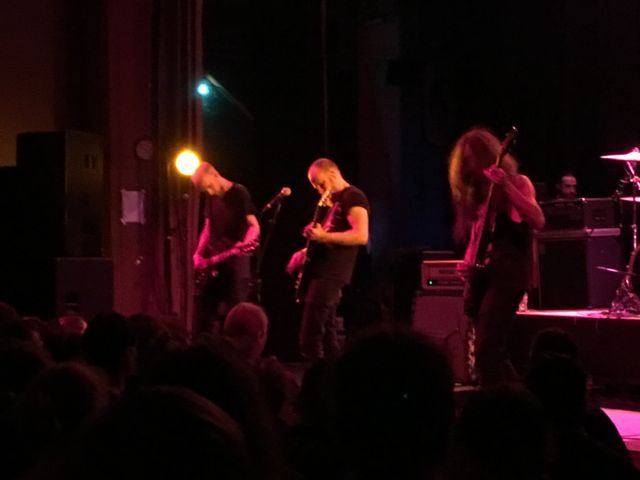 It was another beautiful sunny day in Olympia, with the temperature reaching the mid-80s by the time I reached the Capitol Theater, about five minutes into the set by Brooklyn-based Yellow Eyes. I’ve been a fan of the band’s recorded work, the most recent of which is last year’s Sick With Bloom, but this was the first chance I’ve had to see them live.

Though the front three of the quartet stayed rooted in place for most of their set, the electrifying music more than made up for the relative stillness of the performers. With guitarist Will Skarstad shrieking the lyrics in a voice that sounded like steel claws raking across a sheet of glass, the band delivered a dynamic set, with scorching black metal intensity interleaved with penetrating, ethereal melodies that became spellbinding.

I have the sense that this band is still (mystifyingly) under-the-radar for a lot of people. If you happen to be one of those people, I urge you to go here and explore what you’ve been missing. 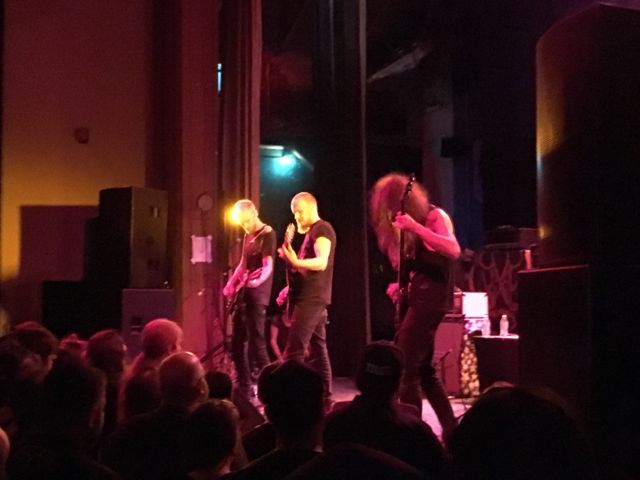 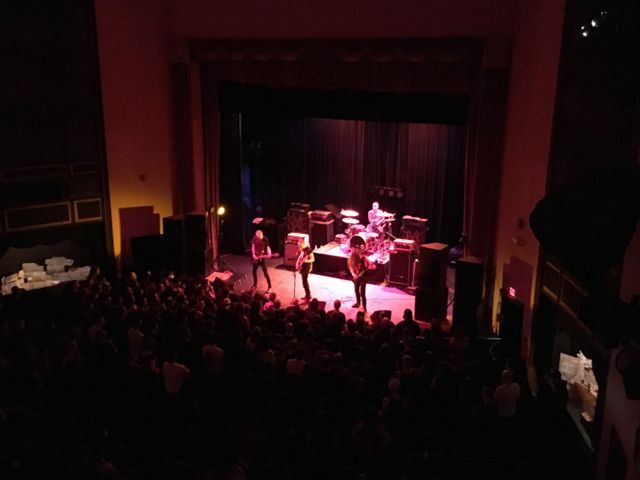 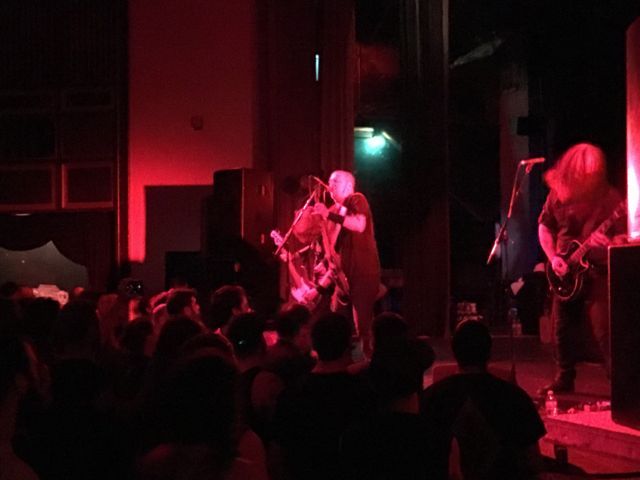 Like Yellow Eyes, Portland’s Nightfell are another band whose recordings have really hit the sweet spot with me, but whom I’ve never seen before. They were high on my list of attractions for this fest, but I was even more floored by their set than I imagined I would be.

In a word, their amalgamation of black/death/doom was decimating — but the songs in the set were also arranged in a way that vividly displayed the band’s dynamic range, from incendiary, skull-smashing assaults to gloom-cloaked dirges, and back again, all of it laced with addictive melodies.

Todd Burdette proved to be a magnetic frontman, with a monstrous voice, and I also discovered something I hadn’t known, which is that Nightfell’s live line-up includes Vince from Aldebaran and Sempiternal Dusk (and ex-Anhedonist). (Go here to explore their music if you haven’t already.) 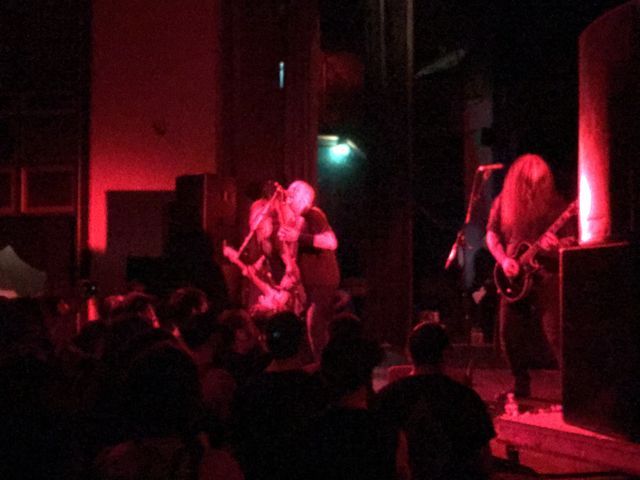 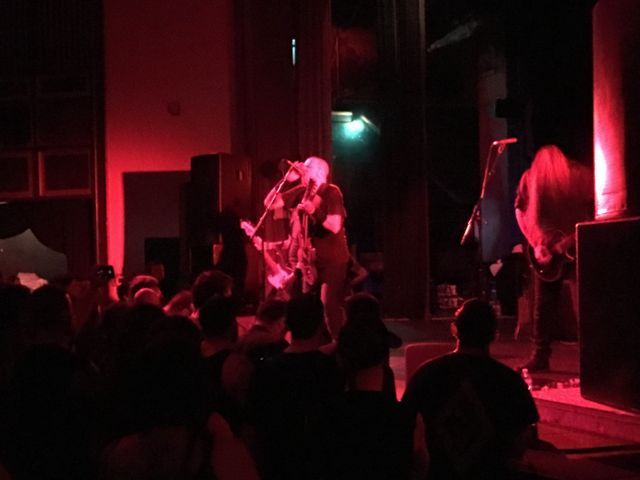 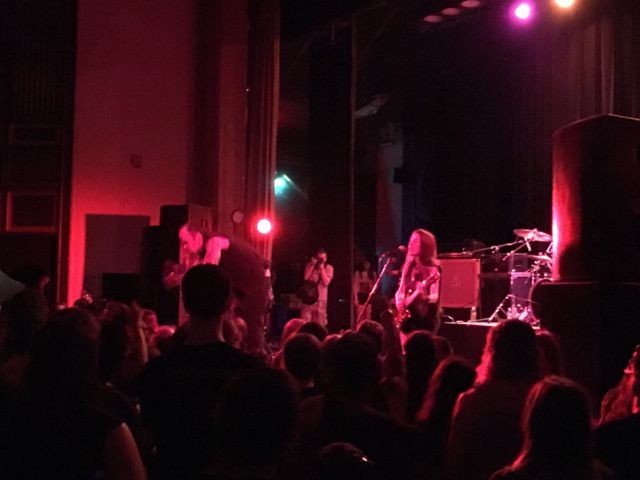 Nightfell was followed by another of my most eagerly anticipated sets, and Vastum definitely brought their death metal A-game. The floor in front of the stage was packed for their performance, and every aisle through the theater was also jammed with people, stretching all the way back to the entry doors. Vastum also triggered what I’m pretty sure was the festival’s first roiling pit.

I witnessed a completely insane (and insanely good) performance by Acephalix earlier this year, and so I had a pretty good idea that Dan Butler would put on another manic, marauding, magnetic show at the front of his other band, and of course he did — spending almost as much time crowd-surfing as he did bounding about the stage roaring like an enraged behemoth.

What I learned first-hand was that the rest of the band is also hell on wheels, including the diminutive Leila Abdul-Rauf, who gave Butler a run for his money in the roaring department while also delivering some killer guitar licks. Definitely one of the fest’s highlight sets.

Below are a few more photos of Vastum‘s set plus a video I made. 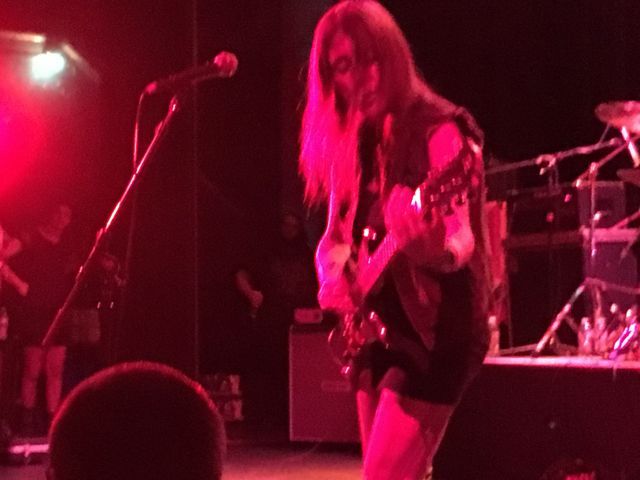 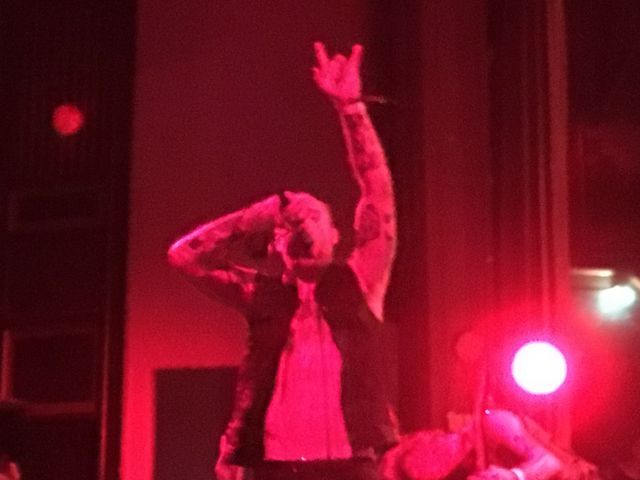 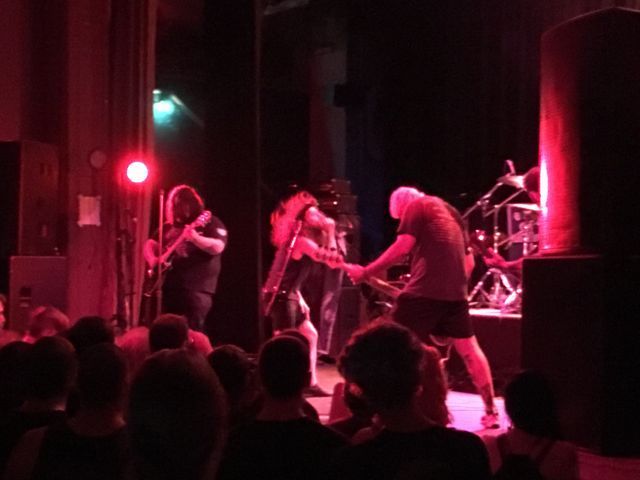 Speaking of diminutive people with behemoth-sized voices, Fórn‘s vocalist Chris P. is another prime example, and the rest of this Boston-based sludge/doom band matched the power of his vocals with an absolutely crushing performance.

Yes, that’s an overworked adjective, but I can’t think of a better way to sum up the impact of the band’s titanic riffs, spine-smashing drum work, and the unsettling atmosphere of dread and emotional devastation that their music summons up. They also know how to put the hooks in your head with a scattering of beleaguered melodies.

This is another band whose name needs to be spread around more, and so for those who may be new to their music, check out their most recent EP Weltschmerz here. 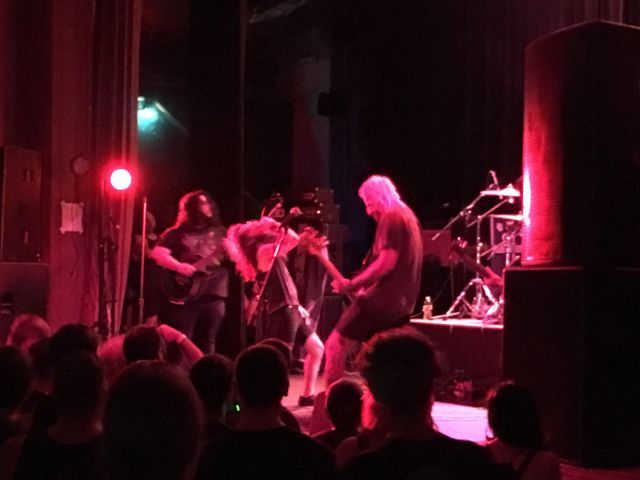 At this point in the festival I took a break to get some food for the first time all day, and to keep an ailing companion company at a coffee shop across from the theater. As a consequence, I missed both Christian Mistress and Magic Circle. Given my own tastes, these bands weren’t on my must-see list to begin with, though of course I encountered more than one person who insisted I made a tragic mistake, especially in missing Magic Circle. 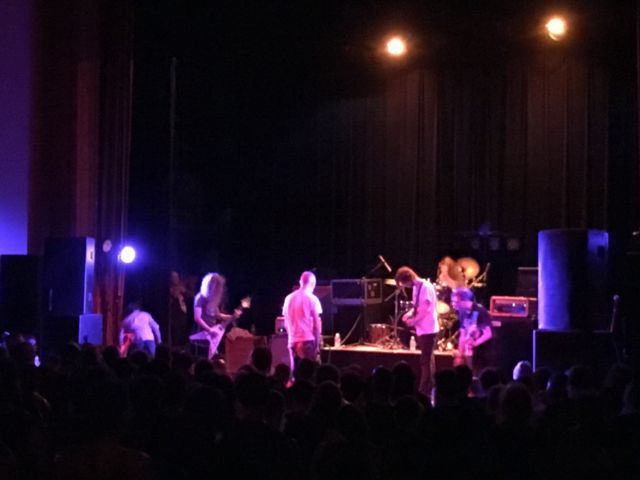 I made it back to the Capitol Theater from my break in time to catch most of Thou‘s set, and was reminded again how absolutely pulverizing this band is. And I mean that not just in the usual sense of physically bludgeoning. Thou‘s riffs and drumming are certainly physically bludgeoning, but the music is also emotionally devastating as well.

And while that air of catastrophic breakdown is thick enough to cut with a knife, I was further reminded of the band’s ability to cast their own bleak spells with glimmering melodies that flow through the mind like a slow stream of gleaming black molasses. (I don’t know if that made any sense, but it’s the metaphor that popped into my head as I was listening, and I’m sticking with it.) 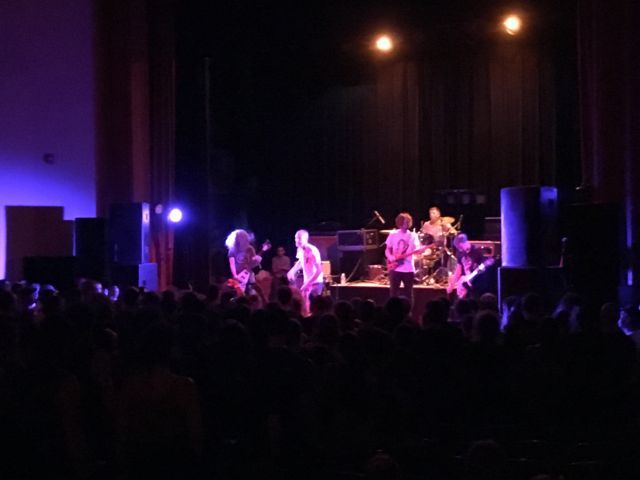 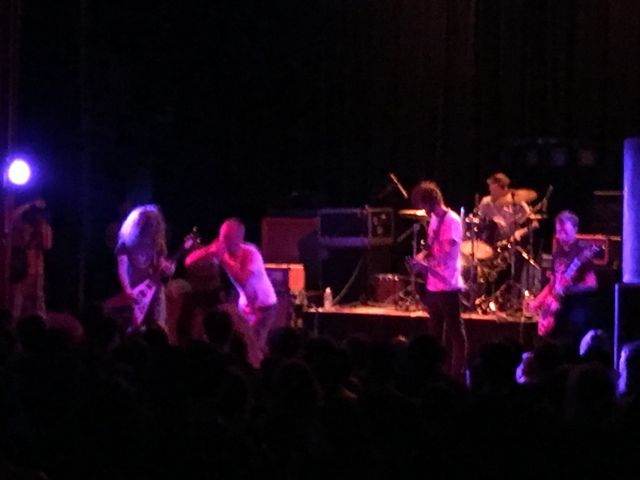 A lot of people came a long way to Migration Fest to witness this one thing, to be present for this one event of genuine historical significance: the first live public performance by Panopticon. That’s not at all to downplay the remarkable quality of the festival line-up as a whole, but this promised to be something very special.

And man, it really was.

Austin Lunn proved himself to be on stage what he has already proven himself to be through his recordings: a force of nature, in multiple senses of that old phrase. It took a very long time for him to bring himself to do this, but despite what must have been manifold misgivings in his own mind about this undertaking, it was an unmitigated triumph.

Much of the credit for this absolutely magical set must be shared with the performers who appeared with him in this first live version of Panopticon: drummer Ray Capizzo from Falls of Rauros, bassist Andy Klokow (who also performed live with Obsequiae), and guitarist Jake Quittschreiber from Circadian Ritual. They and Austin were all so locked into the music and performed it with such passion and precision that you’d think this foursome had been playing live together for years.

The band played for 90 minutes, with a very short break before the last two songs, and the time flew by. It was so mesmerizing that it seemed like a set of half that length. Apart from the quality of each song, the selection of the songs and the order in which they were arranged had a lot to do with why the set never flagged — and seemed to end all too soon even after an hour and a half. I’m pretty sure this is the setlist, though I invite corrections:

Tamarack’s Gold Returns (pre-recorded, as an intro to the set)
Into the North Woods
Oaks Ablaze
…on the Subject of Mortality (the entire album)
Black Soot and Red Blood
Norwegian Nights
The Sigh of Summer

For the final song, Panopticon was joined on stage by guest vocalist Tanner Anderson from Obsequiae, and it was one hell of a finale for one intensely memorable last set on Day Two of Migration Fest. At the end, Austin Lunn told the ecstatic crowd that he couldn’t thank us enough for being present and for such an enthusiastic response. He is a humble man — those of us who witnessed the show are the people who have been having trouble finding sufficient words of thanks for this experience.

Below you will find a few more photos and then five videos I made with my iPhone, showing Panopticon‘s performance of five songs from this 90-minute set at Migration Fest, including the opening number and the last one. When I have more time, I’ll also upload videos I made of other bands on both Day Two and Day One.

P.S.  I understand some folks have been having trouble with the Fileburst video streams included in the original version of this post. Our friend Ben Smasher volunteered to upload the videos to YouTube, and I’ve now embedded those streams below. HUGE thanks to Ben for doing this!