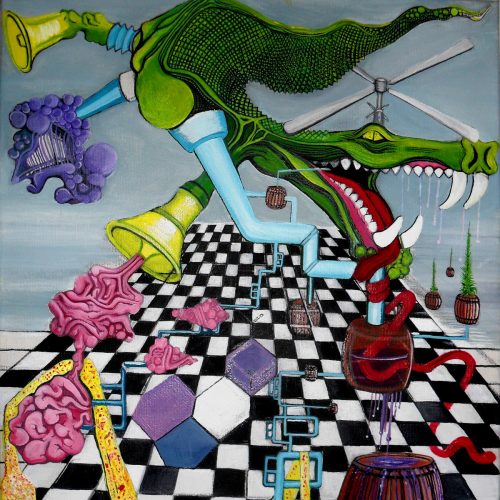 I have to restrain my usual wordiness or else it will take you longer to read this post than to hear the song we’re premiering today. The song is 57 seconds long, but trust me, it’s a very interesting way to spend a minute (and it’s not the only music from this band that you’ll have a chance to hear after you’ve made your way to the end of this write-up).

The band’s name is Grossty, they are from India, and their debut album Crocopter is set for release on November 15 by Transcending Obscurity India. Like the album’s eye-catching cover art by T Bare McClough, the music will catch you off-guard. And while we’re on the subject of cover art, take a look at the same artist’s creation for the album slipcase (the name of the piece is “Hexesquigglid“): 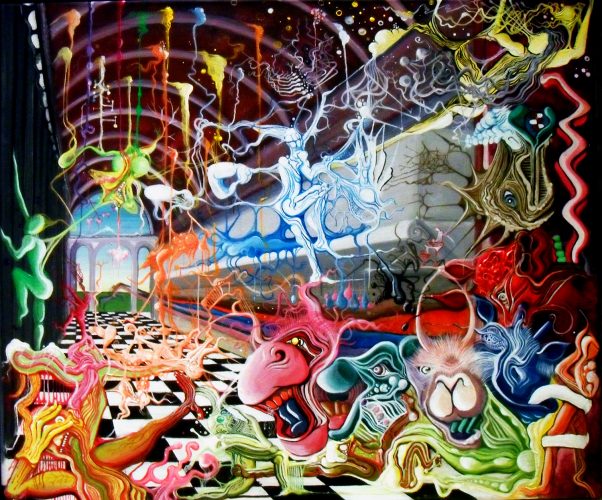 People who buy the physical edition of Crocopter will receive a poster of “Hexesquigglid”. I thought I would mention that before I forget.

As for the song, it’s an example of how Grossty put their own stamp on the mayhem of grindcore. The sound of traditional hand drums begin the song… and the sound of explosive derangement finishes it, everything going about 1,000 miles per hour, from the shrieking dissonance of the lead guitar to the rapid pulse of the bass and the maniacal clatter of the snare. The band’s two vocalists pull out the stops as well, barking, screaming, and yelling with abandon.

Okay, I failed. It took you longer to read these words than to hear the song. But I’ve included two more previously released tracks from the album after our premiere, to help balance the ratio of words to sounds. Get blasted below… (and place your orders on Bandcamp if you like what you hear).