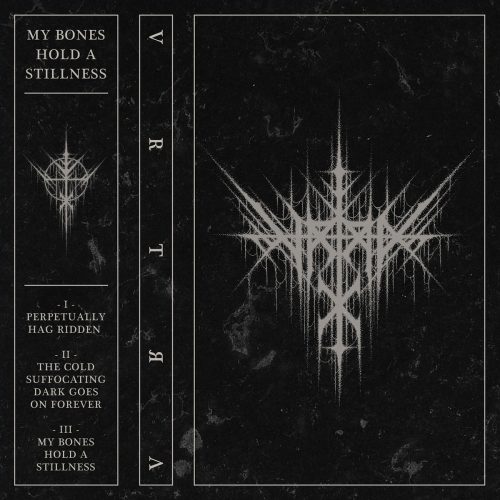 A half hour of music is honestly not a tall order when it comes to heavy metal. Most of the time you’ll find (especially amongst reviews here at NCS) that a half hour is really concise, more often than not an exciting prospect due to its propensity for constant repeats, and usually tied into jokes about a half hour being strictly reserved for Infinite Jest-length grind albums.

A half hour is actually something of a selling point, easily packed into work commutes and lunches. A half hour across three songs makes things much more interesting, and now the concessions start: A half hour available right now only through digital means or via cassette tape is when we start getting into strange territory. Such is the case with Vrtra’s My Bones Hold A Stillness.

With the album’s runtime and scant tracklisting, you might think you could guess what genre Vrtra are into, and you’d be partially right. Vrtra play a doomier, chasm-filling form of death metal where every instrument seems to be drowning within the other. You can almost see the metaphorical arm flailing just before it sinks below the surface. It’s the sort of music that by design is immensely overwhelming, meant to be packed into small rooms where the heat and smell of other human beings becomes part of the overall picture as you and the surrounding crowd become one gigantic mass bowled over by the wall of sound washing over you.

This is a style that has a serious pitfall, though, in that it occasionally becomes one-note and quickly more about atmosphere than anything interesting actually happening on the instruments, where everything just evolves into nigh-undiscernable mud, where the effort exerted by the listener to actually distinguish anything quickly outweighs any enjoyment. That is where My Bones Hold A Stillness is an impressive debut by this four-piece, as for almost its entire thirty minutes it is entrancing and hypnotic.

This haze-covered branch of the metal tree can make it immensely difficult to keep a listener locked in throughout the entire thing, which is why this album is so impressive. My Bones Hold A Stillness could best be described as a suite of music. Each successive song builds on the one before so that even though the track list is only three songs long, it is more like one solid thirty-minute block of music all building into its title track; the first two songs do the heavy legwork of erecting the foundation upon which the final song is built.

Where Vrtra’s currently-shrouded-in-secrecy band members show their expertise in this style is that they haven’t forgotten how to write a guitar riff or add a melodic line to keep things interesting. Although there is certainly the fair share of that patented doom huge-wall-o-guitar fuzz, the musicians provide something that keeps My Bones dynamic for its whole run. It is an EP built to be listened to front-to-back, and while each song could stand on its own, all three together provide a full experience as the breaks between them are minimal, with My Bones growing and transforming all the way to its finale.

The album has the tempo of a flood overtaking a town — violent and heavy, with a sense of inevitability that there will likely be nothing left by the time it is all done, a force of nature that has quickly grown beyond its bounds. The literary analogies become self-fulfilling in that sense when the second song on your EP is called “The Cold Suffocating Dark Goes On Forever”, because it is probably the most “exactly what it says on the box” song-title fit for this EP that exists.

The start of “Perpetually Hag Ridden” will give you a damned good idea what you’re in for. Its opening segments begin as innocuously as possible before the band comes crashing in, with drowned-out and low vocals providing the atmosphere as the band builds its world for the first few minutes. The whole band finally ramps up into a hammering and percussive bit about two minutes into the song, and the sort of slow-hypnotism that My Bones Hold A Stillness uses as its secret weapon begins there. The EP has the flavorings of an occult chant without falling too far up its own ass, never forgetting that the music is what comes first and foremost — so when the deafening blast section kicks in, it is almost welcoming.

My Bones goes through multiple moods, but never quite leaves the idea of being a waking nightmare, when your vision is still glossed over and you aren’t quite sure what exactly is attacking you. “The Cold Suffocating Dark Goes On Forever” is actually the shortest of the three, punching in at over seven minutes. Its two siblings clear ten easily. “The Cold Suffocating Dark”, however, is the most straightforward and fast of the the three songs. It’s the middle-piece of a trilogy and it is a leviathan of a track, unafraid to throw itself and the listeners around. It is also the song where Vrtra’s dalliances in the realms of black metal come through most clearly, as the vocals go from a low and gutteral beast to a shrieking monster, albeit one that is still being beaten to death with a guitar. Whilst “Perpetually Hag Ridden” introduces its elements slowly, “Cold” begins as a monster and only after a while goes for the slow-and-dissonant approach –with  both serving a master in the final song, the titular “My Bones Hold A Stillness”.

“My Bones Hold A Stillness” is a twelve-minute song and the one track on this whole EP that could best stand on its own seperate from the rest, which is probably why the whole EP feels built around this song. When I muse about this EP being the sort of music made for small rooms, it’s this final song that really comes to mind. At this point in a listening session, it’s hard not to imagine the band absolutely shrouded in smoke and the venue hotter than hell.

“My Bones” opens slowly, more in line with the EP’s opening song, with vocals “ohming” their way through the background. “My Bones” has a heavy-as-hell groove to it, though; the guitar riff that makes up the opening section is certainly one of the better slow-headbanging groovers that have come out this year. The vocals remain low and drenched with muck in those opening minutes, only giving way to a more traditional black metal high two-minutes and fifty seconds into the song. They feel desperate at that point, but it is also where the song is most prone to leave its listeners in a trancelike state.

The whole twelve minutes of the song seem to fly up until the mid-point of the track, when its one deceptively pretty melodic break happens — which of course is then completely destroyed by an assault of drums and guitars that are like a final wall of flame destroying a landscape already pockmarked with death and disease. If anything is going to wipe the slate clean of the first twenty-five minutes of this EP, its the final five minutes that closes the whole experience.

After a couple of listens you can absolutely see the appeal of what Vrtra have on offer. The collection of three songs that blur into one huge track on My Bones Hold A Stillness are the type that can leave a listener worn out by the end of it. It’s the sort of musical suffocation that you come to this genre for, and it is one that shows Vrtra have an expert hand. While it may be a little difficult to find outside of a digital copy at the moment, it is a highly recommended listen.

This is one of those EPs that absolutely cry out for an extended headphone listening session, because the atmosphere built by Vrtra is undeniable, even if you can absolutely recognize the pieces being used. The band move within genre bounds with a deft hand and they nail every objective that has been set out for them. My Bones Hold A Stillness is a damned good first release and one that should keep us looking at this band to see what they do in the future.

4 Responses to “VRTRA: “MY BONES HOLD A STILLNESS””