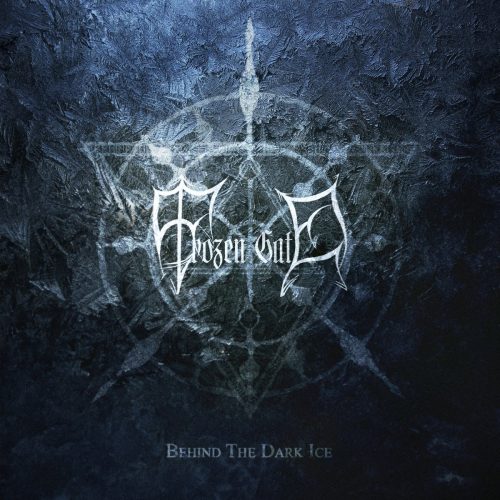 (In this post DGR reviews the debut album by the Swiss band Frozen Gate.)

Occasionally some questions will arise as to how the NCS reviews process works. To be honest with you, the answer is fairly simple — we’re pretty freewheeling. We try our best to keep up with recent and relevant releases but often the authors of the site are pretty free to write about whatever strikes our fancy, which is why you’ll occasionally see reviews for albums that came out anywhere from the beginning of this year to two years ago on this page. If we think our readers will like it, we’ll write about it.

But, there are occasional quirks in this system that can often bring about discoveries: In this case it is that I am a giant manchild, who at his “wizened” age will still occasionally check out albums if the combination of cover art and album name strikes my fancy or in this case, amuses me.

Switzerland’s Frozen Gate released their debut album Behind The Dark Ice earlier this month and I came about it whilst scrolling through my various resources for recent releases. In this case the cover art for Behind The Dark Ice caught my eye — mostly for how stark it is. It can best be boiled down to just the band’s logo with a crest and some dark blue paint-brushing, evocative of a frigid land. It’s bare bones but it manages the job of matching its name sake of Behind The Dark Ice. I just had to have a look — while having no idea what sort of music Frozen Gate put out. 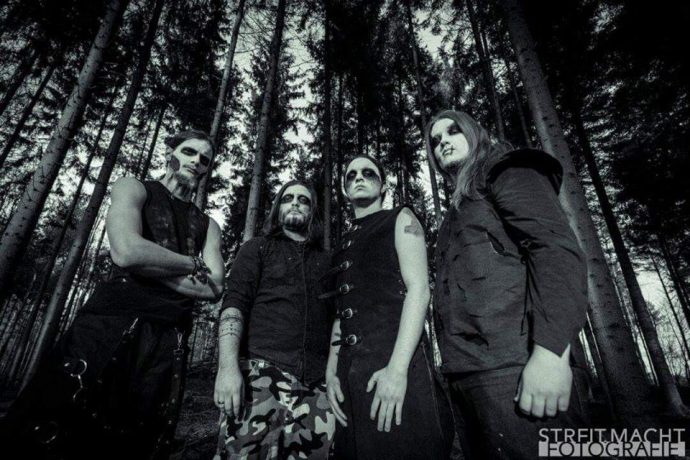 What I would find after multiple Bandcamp spins and some research on their Facebook page is that they’re a symphonic black/death metal band who are just getting started with their career — having been founded in 2013 — but judging by Behind The Dark Ice, which is their first release, they’re ambitious as hell and throwing everything they can into it.

A couple of things demonstrate that Frozen Gate are aiming high on this release from the get-go. One: The album opens with a two-parter named “Evangelium”, and those two songs are subtitled “The Inquisition” and “The Revelation” — at the very least, the first two songs spell out that Frozen Gate are going to spend the thirteen tracks in Behind The Dark Ice aiming for the “epic”. Two: Many of the songs on this album are thick pieces of music, clearing four minutes easily, and the huge production style lends itself to creating a massive wall of sound.

Frozen Gate consists of four members currently masked by pseudonyms — so I have no history as to what the gentlemen like Erebos, Eversor, Priest, or Charon might have done previously, if anything, to provide context as to how these guys got as good as they are. But the music they make is backed by a huge symphonic, orchestral sound. In that way they actually remind me of Italy’s Darkend, albeit the two bands are going about it in two very different ways. Both aim to create a grandiose epic of music and make use of a synthesized orchestra to help provide a bed for that sound.

Most of the songs on Behind the Dark Ice move at a marching tempo — with the precision of a military legion — and allow much of the melody in the band’s work to be provided by that backing orchestra. The band themselves are very percussive, lyrically in lockstep with many of the heavier guitar and bass grooves, while the drums behind them become the battery that fires upon whatever lies in front of them.

On Behind The Dark Ice, Frozen Gate are attempting to craft a massive stage-play, utilizing every instrument to that effect. The backing symphonics are the brush with which they paint their landscapes, and the vocals do the hefty legwork for each song, describing and protraying the various acts. While the guitars are not often required, as more often than not they are just used to propel each song forward in this genre, they do their best to remain heavy and interesting, often amplified by the theatrics taking place on the symphonic front.

A song like “I Am The Rising God”, for instance, begins with Gregorian-sounding chant before moving into a heavy and slow segment, the drums precise enough that they could almost be mechanical. The character of the song is empowered and mostly snarling through a heavy death growl. Frozen Gate use a three-pronged vocal attack with the stringed-instrument wielders handling that work, and during the shouted chorus of “I Am The Rising God” you get a full demonstration of that fury. Frozen Gate’s chosen vocal style is mostly a mid-to-high black metal death-growl, but in “I Am The Rising God”, the shouted section is practically built for the whole crowd to get in on the “RISING! GOD!” segment of the song.

Given that two songs later you have “Prayer Of A Heretical Priest”, you can quickly sense where the story will be going from there. Although to be fair, that point is most hammered home during the blast section that follows the giant horn blasts during “Illuminate My Way”, especially once the pianist starts sweeping across all the keys in an act of sheer madness.

Behind The Dark Ice features two guest appearances, one by Roger Rüfenacht of the band Bloodstained Ground (whose most recent release was 2014’s A Poem of Misery) on the blast furnace of a song that is “In Nomine” — which is one of the later songs on the disc, and also one of the faster ones on the album overall. The constant hammering of the snare drum makes this song fire on all cylinders like no other, and with guest or not, “In Nomine” is an immensely strong song on this disc and one of the instant recommends for this album.

The other appearance is by Ne Obliviscaris’ own Xenoyr on the song “The Second Face Of God”, which is another super-fast track on this album and, again, one of the more highly recommended ones. The band fire on all cylinders throughout the whole track, spitting hellfire on the vocal front. The fact that Frozen Gate basically start the song with their foot on the accelerator makes “The Second Face Of God” one of the more wholly exciting tracks on this album. Actually, a huge chunk of the back half of Behind The Dark Ice is just crushingly heavy on that front, shifting between the band’s preferred marches and some monstrously heavy and fast songs — all of them proving to be gigantic walls of sound.

If there is one knock against Behind The Dark Ice, it is one that is relatively common. It’s one that groups like Xerath and Forever Dawn, bands who make similar use of huge symphonics and hefty groove work, tend to fight with constantly. The issue is that you have to be prepared to really make a full run at this disc. Behind The Dark Ice is an hour long, which honestly is not that big a deal. We’ve certainly covered longer discs, and there are longer ones out there; thirteen songs in an hour isn’t an issue. What can come up, though, is that Behind The Dark Ice just feels unrelentingly big, so at times the listening experience can blur a bit and cause your attention to wander. With so much going on at all times, there is something new to discover all of the time within these songs (which makes individual listens a fun adventure), but when that sense of scale becomes the new normal, at times you can get lost. Thankfully, the issue starts to resolve itself rather quickly once you get into the back half of the album and the band shift into a sheer adrenaline-junkie mode with some of their faster songs.

But, and I’ve mentioned this before, if there is one thing I am a sucker for when it comes to music it is a ton of ambition. Frozen Gate are pulling absolutely no punches with Behind The Dark Ice — it is sixty minutes of the biggest music they could make, and the fact that they went for it makes me like them a ton. They throw everything into these songs, reaching a multitude of different dynamics and playing up the theatricality that has recently become a hallmark of a genre like symphonic black metal. It works often, and when it doesn’t, it doesn’t drag for too long.

Behind The Dark Ice is a huge undertaking for a listener, but one that is as fun to dissect as it is to just listen to. Yes, it sticks pretty close to genre boundaries, but the picture that Frozen Gate are painting on their debut belongs on the side of a building, because that feels like the only canvas large enough to really contain it. Behind The Dark Ice is a grand first step for this band’s first release.

6 Responses to “FROZEN GATE: “BEHIND THE DARK ICE””