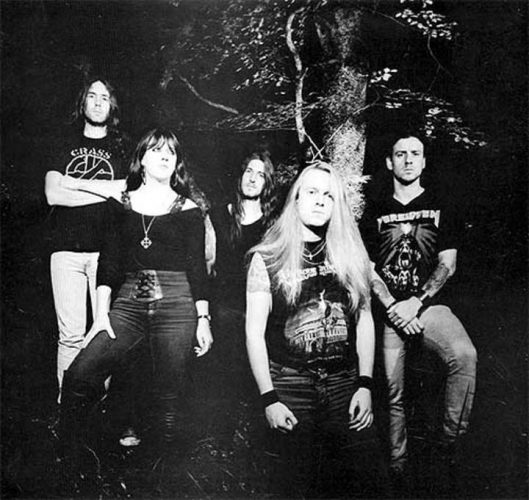 Bolt Thrower’s music will never die, even though the band will not move forward without Kiddie. BT’s influence on heavy metal, and death metal in particular, has been vast, and it will be timeless. As one sign of this, we bring you a very special premiere. For 24 hours only, we will stream a medley of Bolt Thrower songs recorded by the Swedish death metal band Just Before Dawn, who will be very familiar to readers of this site. The medley is an amazing track and a most fitting tribute to an irreplaceable group.

For those who may be discovering Just Before Dawn for the first time, it’s the project of guitarist/bassist Anders Biazzi, who is again joined on this track by drummer Brynjar Helgetun. Over the course of JBD’s releases so far, Biazzi has succeeded in recruiting an amazing array of death metal vocalists to his war machine, and he has done that again for this special BT tribute. Below you will find the songs excerpted in this medley, as well as the vocalists who appear on it:

Bolt Thrower has been a significant influence on JBD’s own music, which has itself been war-themed from the beginning, and this medley is a seamlessly integrated piece that does full honor to Bolt Thrower’s legacy. In a word, it sounds fantastic.

The stream will be live for only 24 hours — but it will be included as a “hidden track” on Just Before Dawn’s next release — and you can be sure we will have more info for you about that when the time is right. To discover JBD’s previous releases, go here:

Below is the stream of JBD’s tribute medley, preceded by Bolt Thrower’s September 14 announcement from their official web page.

WE WILL REMEMBER THEM.

On behalf of ourselves and Kiddie’s family, we would like to thank everyone for their thoughts and support over the last 12 months. Together with Kiddie’s family we made the conscious decision to keep his unexpected death a private matter, and to take time out to deal with it all.

When Kiddie joined us back in 1994, although he was only 17, he instantly improved Bolt Thrower as a live band, and no one was more loyal to, and prouder to be in Bolt Thrower than him.

We spent over 20 years together, touring the world, with 3 different vocalists, but he was so much more than just a drummer to us. So when we carried his coffin to his final resting place, the Bolt Thrower drummer position was buried with him. He was, and will now forever remain THE Bolt Thrower drummer, our Powerhouse and friend Martin “Kiddie” Kearns.

As for the rest of us, Bolt Thrower has been our way of life for 30 years, never driven by money, fame or ego, but by our own personal principles and values that have guided us through life, and which bonded us as friends long before Bolt Thrower was even formed…

“We are not now that strength which in old days
moved earth and heaven; that which we are, we are;
One equal temper of heroic hearts,
made weak by time and fate, but strong in will
To strive, to seek, to find, and not to yield.”

3 Responses to “AN NCS PREMIERE: JUST BEFORE DAWN — “A TRIBUTE (WE WILL REMEMBER THEM)””