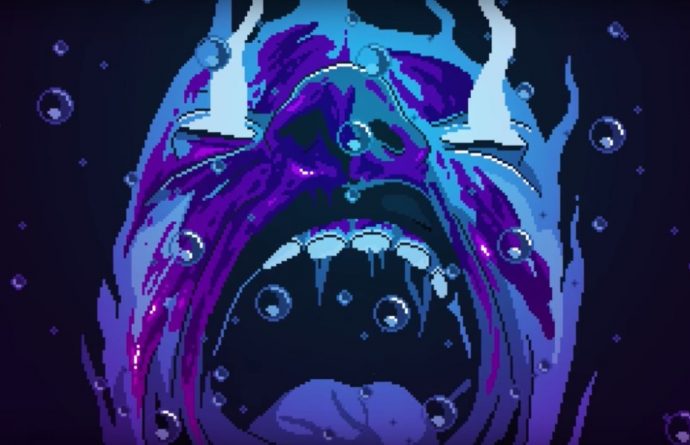 The rule stated in explicit terms in the title of this site has been riddled with exceptions beginning even in the early years, and it has become more riddled over time. But on a percentage basis, it’s still mainly THE RULE. Why then does this post exist?

I suppose even I need a short break from the generally bestial and infernal ferocity that’s my daily metal bread and butter. And these songs happen to have struck a chord, despite the fact that the singing is mostly clean and most of the music relies more on syncopated rhythms and a particularly recognizable guitar sound than what I usually listen to.

Perhaps something here will also prove appealing to you. And if not, there will be a Shades of Black Post on Sunday, and you know what that means. 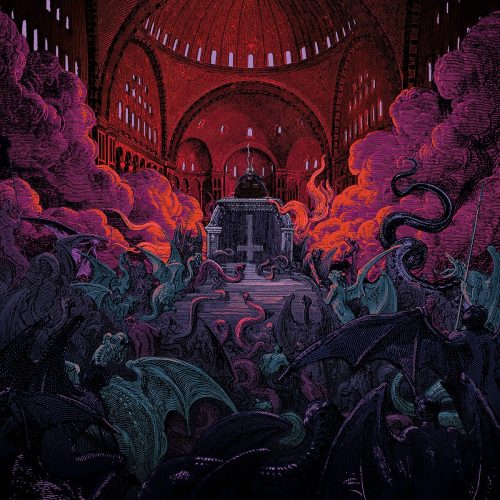 The first song in this collection is by the band GosT. No, not that band, the other one. This one has no “h” in the name — though the two bands do have something in common: They have established an affinity with the community of metal not so much because of the way the music sounds as because of the lyrics and the visual imagery, which exalt the greater glory of Satan.

A few days ago, GosT debuted an animated lyric video for a song called “Arise”, which tells the story of the Fallen Angel in an adaptation of John Milton’s Paradise Lost. The video even makes use of famous artwork by Gustave Doré, which illustrated the poem, and by John Martin, whose art has graced the cover of more metal albums than you can shake a stick at.

The vocals are by Kriistal Ann. I did not know who she was, but did some research and discovered that she is a Greek artist who has released three solo albums, the most of recent of which is on Bandcamp here. Her voice is a highlight of this song. And I must confess that I found GosT’s electronic backing music very catchy. When combined with the video, it summons the tale in musical terms more effectively than I thought it would at first. 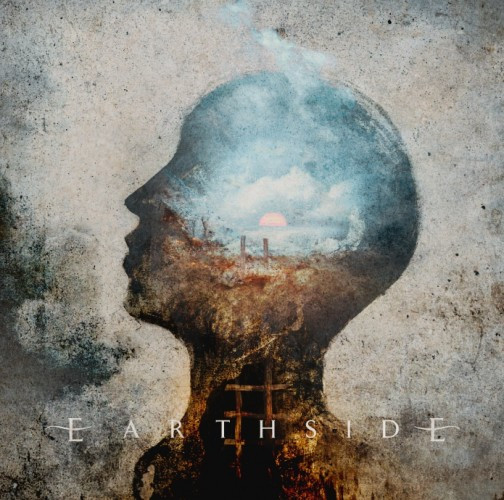 I’ve written about the Connecticut band Earthside before — twice, to be exact. In trying to describe the first song I wrote about more than a year ago (“The Closest I’ve Come”), I used these words:

“The song is an effective blend of light and dark, heavy and shimmering, astral and earthy. Bright guitars glint like sunlight on water over the top of big riffs that jab, pound, and grind like corroded gears, all of it driven by syncopated drum rhythms that will get heads nodding.”

Now we have another Earthside track and a new video. This song, like the first two, appears on an album called A Dream In Static, and it also includes vocals, this time by Björn “Speed” Strid of Soilwork. The name of the song is “Crater”. The video was directed, filmed, edited, and colored by Jose Pascual of 11Frames Productions.

“Crater” drives hard, with interesting rhythmic interplay and plenty of hammering, jolting weight in the low end, but Strid’s emotive vocals cause it to sail and soar as well (though he does turn his voice in harsher directions near the end). As in the previous Earthside tracks featured here, the band also draw the mind toward the cosmos above and beyond.

Earthside will be supporting Leprous on a North American tour this fall, and rather than simply use backing tracks for the vocals of people like Strid, Earthside plans to include multimedia displays (including videos such as this one) as accompaniment for their own live performances.

The album is available here: 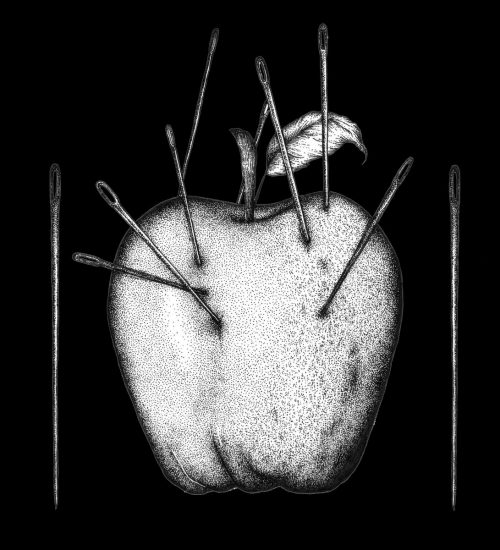 The next song in this collection is a single by a London band named Sleep Token. Promotional materials we’ve received hint that the band is some kind of “supergroup”, but the identity of the members is being kept under wraps, with the mystery used as a way of attracting interest. In addition, no details have yet been disclosed about the name, street date, or length of whatever release includes this single. The name of the song is “Thread the Needle”.

The falsetto-range, dreamlike vocals appear immediately in the song, floating slowly like early morning mist against a droning, somewhat ominous ambient backdrop. The ghostly, intangible quality of the song grows as the ambient music begins to shimmer and an unearthly, evanescent melody appears — but those sensations are eventually combined with the contrasting weight of near-atonal, djent-like riffs and bursts of gunshot drum progressions. The overall effect remains hypnotic.

“Thread the Needle” is available as a “name your price” download at Bandcamp: 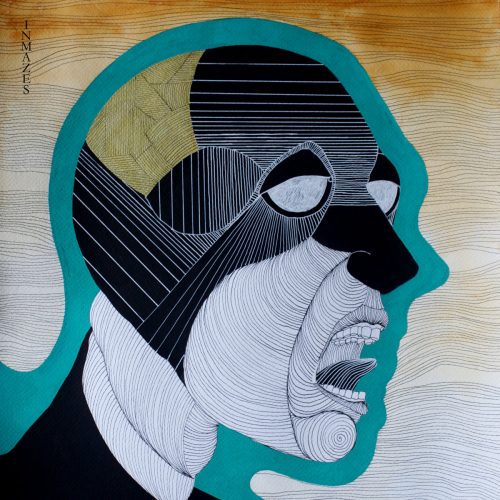 Yesterday Mascot Records released a debut album called Inmazes by the Danish band Vola. I haven’t listened to the album but have watched a recent video for an album track named “Stray the Skies” (which sounds like the name of a deathcore band). I was induced to check out the video by a press release that described it as “2,120 individual drawn frames inspired by the album’s artwork (which is based on a watercolour/acrylic drawing by Danish artist Anders Thrane)”; the video was created by the band’s bassist and his girlfriend using an app named “Procreate”.

The song itself is described in press materials as one suggestive of “classic Pink Floyd mixed with Rammstein and Meshuggah“. It does indeed make use of jarring, off-kilter rhythms with pleasing heft, and the melody is very catchy, with vocals that are divided between high clean sounds and wrenching screams.

Inmazes was mixed and mastered by Jens Bogren of Fascination Street Studio. Below, I’ve included the Bandcamp album stream as well as the new video. 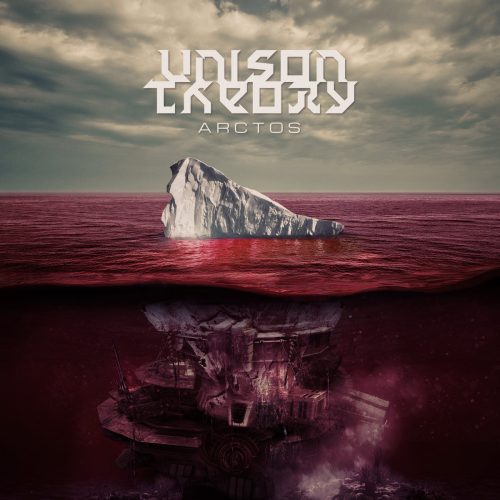 I checked out the next song mainly because it includes a guest appearance by Tommaso Riccardi, the frontman of Fleshgod Apocalypse. The song is “Project Shockwave” by a band from Rome called Unison Theory. The song appears on the band’s debut album Arctos (set for release on October 21 by Time To Kill Records), and it debuted in the form of a lyric video. Arctos is described as “a journey based on the amazing book by James Rollins Ice Hunt with unbelievable scenarios and horrific creatures that will lead you through one of the most dangerous and breathtaking stories ever concieved.”

This is the lone song in this collection that doesn’t include clean vocals — it’s harsh screaming and growled barking all the way through. I’ve included it here because it shares with most of the other songs an affinity for syncopated rhythms. But there’s more going on in this dynamic, multifaceted song than just that — it includes not only a very appealing melody but also flurries of blazing instrumental acrobatics (including a hell of a guitar solo) and tech-death ravaging.

The press release on this one suggests that fans of Revocation, Obscura, and Symphony X will like it. I do.

Arctos can be pre-ordered here, or via Bandcamp: 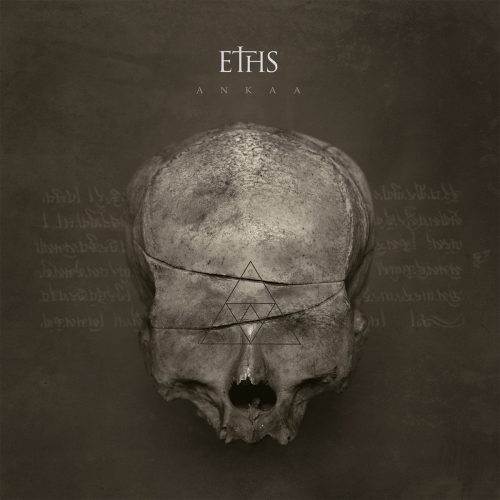 To conclude this collection I have a new video for a song called “Nihil Sine Causa” by the French band Eths. That song is from the album Ankaa, which was released earlier this year and includes the first appearance of Eths‘ new vocalist, Rachel Aspe. The album also includes vocal contributions by Björn Strid (for the second time in this post) and drumming by Dirk Verbeuren, and “Nihil Sine Causa” features Sarah Layssac and Jon Howard.

To be honest, I was uncomfortable when I saw the Bandcamp tags for Ankaa, which includes such references as Butcher Babies, In This Moment, Lacuna Coil, Otep, and Suicide Silence. But by that point I had already watched the video for “Nihil Sine Causa” and got sucked into it.

It does use a tag-team between carnivorous harsh vocals and clean female vocals — but the exotic quality of the (excellent) clean vocals is a plus, and the song does hit hard and with appealing viciousness. It also includes a segment that makes use of pulsing/skittering electronica, along with the djent-style atonal hammering that appears elsewhere in this post.

A full album stream appears after the video.