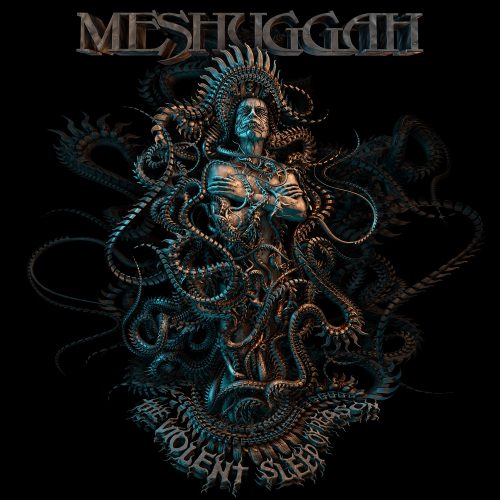 (Andy Synn delivers his first impressions of Meshuggah’s new album, The Violent Sleep of Reason, with thoughts on a track-by-track basis as well as overall.)

So the big question really isn’t “how good is The Violent Sleep of Reason?”… no, what we should be asking is “what sort of album is it…?”

With that in mind I decided that, this time around, it would be more fun to eschew the traditional review format and instead just note down my first impressions and overall musings about the album as I listened to it. So, just as Meshuggah went for a more raw and “organic” approach this time (doing it all live in the studio for the first time in their career), so too am I going to produce a much more raw and unedited piece of writing while I listen to it.

Of course I reserve the right to change my position in the future, but for now… let’s just see what happens! 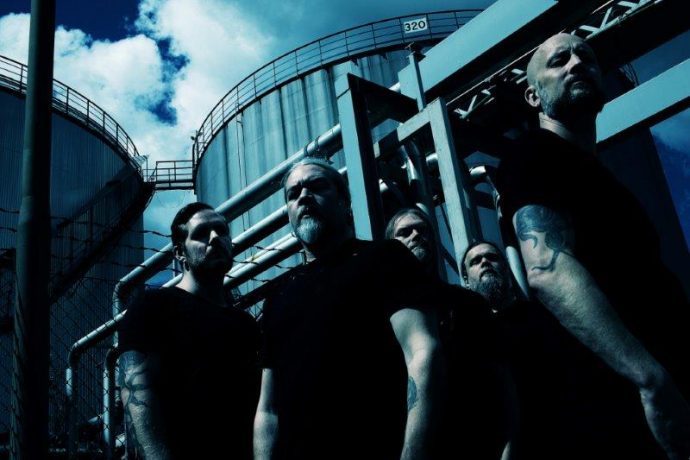 God-damn, but this one hits you hard right from the go. There’s a jerky, convulsing interplay between the guitars and drums that puts me in mind simultaneously of squealing pistons and straining tendons, which I suppose is an apt enough metaphor for Meshuggah’s particular blending of meat and machinery. The guitars in particular sound like coiled springs about to snap.

That being said, the initial impression this track gives me is that The Violent Sleep of Reason is going to be more of a drummer’s album this time around, particularly when compared to Koloss, which seemed a lot more riff-happy. Here it’s Haake’s anomalous percussive bombardment that’s running away with things.

Funny story, but I actually heard this one around a week before it was officially released, when it suddenly leaked onto YouTube (and was just as suddenly taken down). I liked what I was hearing back then, and I like what I’m hearing now. In fact, this one feels short, sharp, and extremely catchy (in the Meshugganized sense of that word), with a bunch of taut, straining riffs and gleefully weird rhythmic hooks, and I think it’s going to have a lot of replay value (though “Clockworks” is still probably a better song overall).

Damn, that is a good opening riff. No matter how many bands try and copycat Meshuggah’s style (not to mention their entire guitar tone wholesale) no-one else seems to be able to imbue their guitars with the same sense of alien malevolence as the quantum quintet themselves.

This one actual feels less overpoweringly percussive and drum-intense than the previous two, and has a much more organic, straightforward sense of groove to it, with Haake’s playing in particular feeling that little bit looser and more unpredictable. In fact, the whole band feels a bit more like they’re flying by the seat of their pants on this one, and that raw energy and vitality really bleeds through the speakers.

Definitely a major standout to me (so far, anyway), this one has a great mix of churning, spine-mangling riffs and surprising dashes of strangely melodic atmosphere. Plus, I love the title.

Some chilling, swirling atmosphere to this one (actually I feel like I haven’t mentioned how noticeably more atmospheric all the tracks have been so far, although this one definitely pushes that element a little further). The guitar riffs have a jazzy, almost improvisational quality to them as well, which I really like. Again, the band sound looser and freer, without being any less strangulatingly tight as a unit overall.

This song is weirdly proggy and weirdly hooky at the same time (without really trying). There’s something quite compulsive about the way the riffs and rhythms twitch and curl and writhe. Again, it feels a lot more… organic… than cybernetic.

If obZen was perhaps the pinnacle of the band’s robotic precision, then this one is definitely on the flip-side stylistically speaking, with Koloss falling somewhere in the middle.

Phew, that is some dissonant and off-kilter stuff they’re throwing at you there… but I like it. Oh, and that riff, that chugging, sliding, unwinding post-intro riff, followed by a verse riff that sounds like a cycling, auto-loaded bolt-gun… can you tell I’m loving this one so far?

The various lead guitar parts and unsettling pseudo-melodic touches really give the track a baleful atmosphere too.

This is definitely already one of my favourites, but it’s also incredibly atmospheric, and extremely densely layered, so I think there’s going to be even more clever twists and turns to tease out on future listens.

This one drops you straight in at the deep end with a heavy, plunging main riff, and a coiled, predatory groove that gets right inside your head. And it’s another track which feels more loose-limbed and lithe than you’d expect from the band, with the five-piece clearly feeding off each other’s energy as they play, rather than simply all trying to lock into the same abstract, algebraic audio pattern.

This one gets off to a solid start, but I noticed my attention drifting around the one-third to half-way mark, and it wasn’t fully recaptured until the song’s extended ambient outro (though I’ll admit I did like the swirling, a-melodic solo… and should probably mention that I really liked the solo in “Ivory Tower” as well).

Still, this was definitely a bit of a miss for me. Not a bad track by any means, but I just never really got a handhold on it, and it never really got its hooks into me. Though, of course, that’s all just subjective, and it’s bound to be someone’s favourite track.

Though I wasn’t blown away by “Nostrum” when it first appeared on the internet I’ll admit it makes a lot more sense in context as part of the album. Particularly coming out of the relative calm which ended “Stifled”.

After all, it’s a fairly chaotic composition, very complex, and notably more “difficult” than some of the preceding songs. There aren’t quite as many hooks, the grooves tend to get interrupted or suddenly deviate right as you’re starting to lock in, and the whole things feels like a big middle finger to the numerous bands who keep trying to take the Meshuggah sound and make it more “accessible”.

This one DEFINITELY feels very drum-focussed as well, with Haake’s extremely busy, fractal percussive patterns repeatedly chopping and changing and inverting in unpredictable ways, practically dragging the guitars along in their wake.

The opening riff to this one is suitably sharp and spiky enough enough to provoke a few involuntary neck spasms, while the “verse” (if that term applies here) has a real Destroy, Erase, Improve feel to it, eventually moving into a weird, lurching groove in the song’s second half that disguises a surprisingly melodic undercurrent. I can see this one being a bit of a grower, though I don’t necessarily think it’s going to be considered one of the album’s best songs by any means.

Well, the surprisingly Cannibal Corpse-esque opening to this one is a real bolt out of the blue. I know I said that Koloss was the more obviously Death/Thrash-leaning record, but this track’s bone-grinding, gristle-chewing opening riff takes that to another level entirely. The melodic touches as well are as dark and eerie as anything you might care to mention, and the massive, tolling main riff refrain is a work of ominous, oppressive beauty.

It’s not quite as frantic as some of the album’s other tracks of, course, but it is very heavy, and hits you again and again with a solid sledgehammer of otherworldly Death Metal, tinged with an overwhelming atmosphere of dread. I can still feel it in my chest. In fact I think the bruises are still developing, and it finished playing several minutes ago. 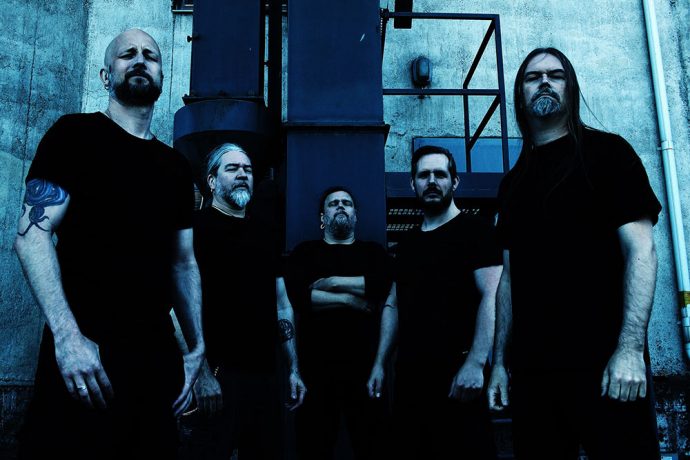 So, if I had to sum this up in comparison to the rest of the band’s discography, how would I describe it?

Well, one word keeps cropping up, and has featured in this piece several times already, and that word is “organic”.

Yes, I’d say that The Violent Sleep of Reason is perhaps the most oddly natural and organic-sounding album the band have put out since… well, possibly ever. The riffs – those instantly recognisable, twanging, clanging, pounding riffs – seem to flow just that little bit more naturally from the fretboard, and the album as a whole just feels that little bit more free-flowing, with an unsettling, almost lucidly nightmarish quality to it.

Haake in particular often feels like he’s playing right on the edge of his capabilities, and although his performance is pretty much as inhuman as ever, it overall feels a lot more natural than on previous records, a little bit more hectic, a little less pre-programmed (at times almost jazzily improvisational), and a lot more fluid. You can practically taste the sweat and tears and sheer concentration the man puts into his playing this time around.

While I don’t think this one is going to beat out Koloss for me — though both “MonstroCity” and the title track are already firm favourites – I think a lot of that is down to the fact that The Violent Sleep of Reason is a much less immediate album than its predecessor.

That more natural, more organic, playing and recording style seems to have resulted in an album that goes where it wants, when it wants, and doesn’t give two figs for the notions of conventional songwriting or accessibility. This makes it harder to love on first listen, but I can imagine a much deeper experience is waiting for me just beneath the surface.

The Violent Sleep of Reason will be released by Nuclear Blast on October 7.

3 Responses to “MESHUGGAH — MY VIOLENT FIRST IMPRESSIONS (BY ANDY SYNN)”