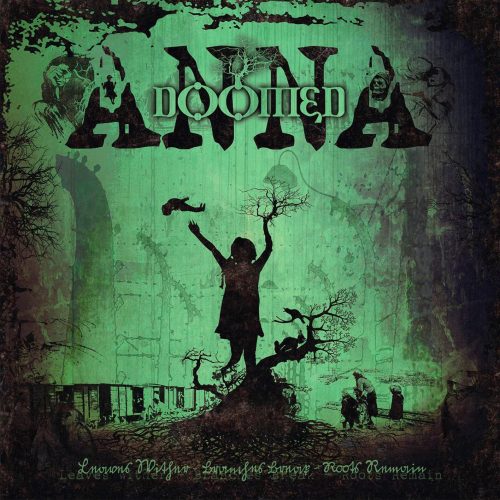 The new album Anna by the German project Doomed is astonishing — astonishing in its conception, astonishing in its execution. Immensely evocative, as intricate and meticulously crafted as a Byzantine mosaic, and as staggeringly heavy as a cascade of bunker-busting bombs, in all ways I can think of it’s one of the most powerful albums I’ve heard this year.

Now, how do I back up those over-the-top accolades? I will try, but fortunately I don’t have to rely entirely on my own strained efforts, because at the end of this post a full stream of the album awaits you. Be good to yourself, and seize the chance to hear it in advance of its September 26 release by Solitude Productions. 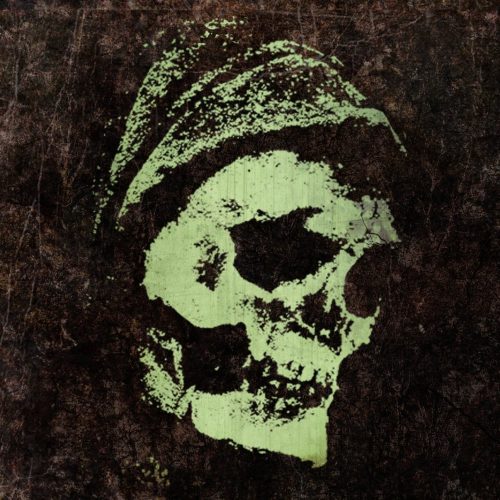 Anna is a massive monument of sound, seven tracks totaling 53 minutes  — and that’s not counting bonus tracks that serve as added inducements for a special edition of the album. But the significant length of Anna isn’t the heart of what makes the album such a monumental experience. It’s the sound itself: The music is titanically heavy — and often brutally destructive on a vast scale.

The pounding you endure from the earth-quaking drum beats and the pile-driving bass rhythms is enough to smash normal human skeletons into fragments too small to see, and the usually slow, bridge-collapsing riffs are often just as cold and mercilessly crushing, It’s the kind of near-physical trauma that could leave a person beaten and exhausted after an hour of it, particularly when accompanied by the music’s predominantly oppressive and chilling overhang of catastrophe and bereavement. But it doesn’t wear you out because the titanic force that forms the spine of the album is only one aspect of the music.

But before coming to some of the many other facets of the music, there are still more ingredients and techniques that Doomed employs to stagger the senses. In addition to a heavily distorted tone in the low end, the dominant vocals are cavernous and ghastly — truly monstrous, jagged proclamations and explosions of fury. 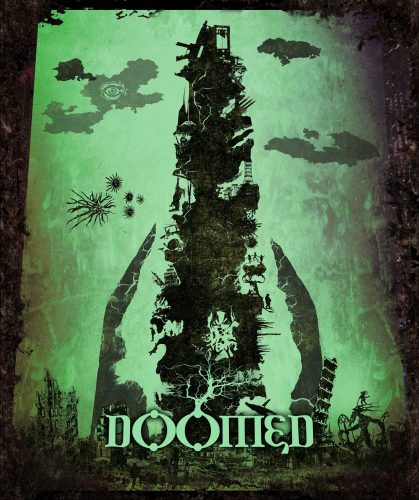 To amplify the decimating impact even further, Doomed sets these heaviest elements of the music against contrasting tonalities and volume levels, causing those heavy elements to explode with shocking force just as you’ve fallen into a spell of introspection. Moreover, the decimating effect of the music isn’t limited to catastrophic hammering and pile-driving.

To pick one example, the first minute and a half of “Withering Leaves” is a fine example of how richly textured the music on the album can be. It’s a slow, dreamlike amalgam of ringing guitar notes, the scratchy tones of what sounds like a violin or flute, an array of unidentifiable ambient sounds (including something with a rhythmic beat), and vocal samples. But no sooner have you become thoroughly engrossed in that bewildering manipulation of the senses than the music erupts in a stunning display of ferocity — something like the sound of a heavy-caliber machine-gun, augmented by massive stomping riffs, dissonant arpeggios, and gruesome roars.

That’s not the only time when Doomed catches the listener off-guard. The opening track “Your Highness the Chaos”, for example, is very eerie and hypnotic at the beginning. I can’t tell whether the unusual tones in the intro are produced by guitar effects, violin, or cello (I have now learned that it’s a bass guitar played with an E-Bow). There’s the voice of a woman, who sounds like she’s singing a lullaby over a slow, heavy bass line. Other strange and unsettling sounds are also present — and none of this prepares you for the blasting, hammering, and dissonance that eventually hits like a bombardment. The entire song has an air of tension and peril; it’s unnerving — but the main riff really gets its hooks in your head. And then there’s the guitar solo, which is wonderful. 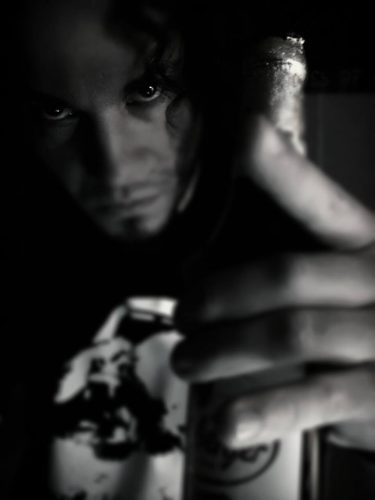 There’s no joy to be found in this album, but there is beauty and a kind of soulfulness — enough to leaven the cold and cataclysmic nature of the main assaults. The main tone of the guitar leads and the solos is high and reverberating, striking a contrast with the immensity of the low end, and they’re all really exceptional. The serpentine melody that snakes its way through “As the Thoughts Began To Tarnish” is exotic, with an ethnic Indian resonance; the long solo in the final minutes of “The Weeping Trees” is achingly beautiful and full of soul; the solo in “Withering Leaves” is intensely mournful; and equally masterful lead and solo performances are present in every song.

Yet the lead guitar parts on this album are just as often deranged, dissonant, and abrasive. The main object of the music, after all, is plainly to convey harrowing emotional intensity, to create an unsettling atmosphere of tension, torment, and even terror

There are some interesting variations in the vocal deliveries, too, thanks in part to guest appearances. The high, ghostly, arcing vocals of Daniela Laube on “The Weeping Trees” provide one striking contrast, and Ed Warby’s clean, classic doom vocals on the closing track, “The Frozen Wish”  are a big and highly successful surprise.

Music as inventive, as intricate, and as ingenious as these songs often calls down the label of “progressive” — and so yes, I could call Anna “progressive doom/death”. But as elaborate as it is, the music at its core is almost too heavy and primal to warrant sticking that loaded word on the front of a genre reference, and it may be misleading in other ways. Perhaps “doom/death with experimental nuances” would be better.  But let’s just say it’s an impassioned work of mad genius that will stay with you and pull you back like filings to a magnet. 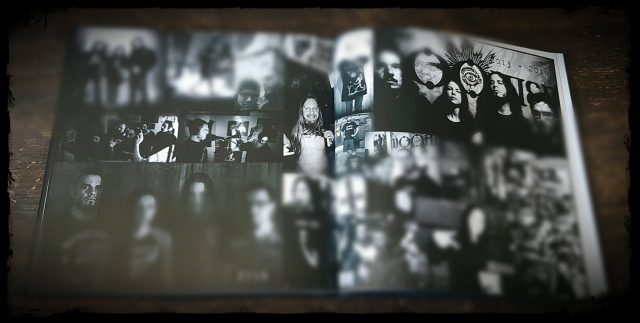 There’s one more explanation for why the album is so remarkable: it is largely the work of one man —  Pierre Laube, who does almost everything, from instruments to vocals to programming, from lyrics to production to the artwork. He did have some talented help, however. Here’s the list of guest appearances: 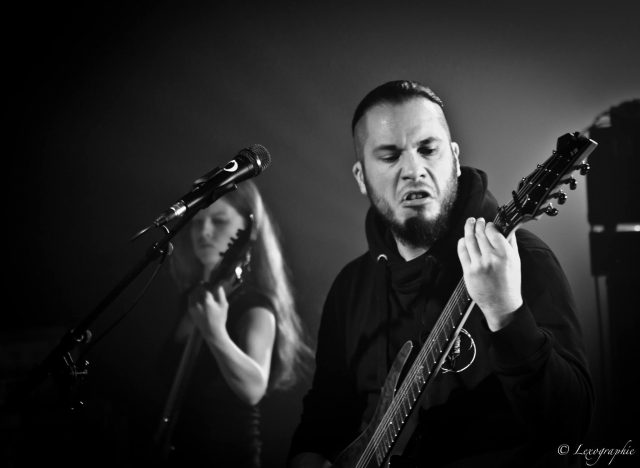 What motivated a masterstroke such as Anna? You listen to it, and the intensity is so palpable that you know the emotional and creative fuel had a specific source. And so it did. Anna is a concept album, explained by Pierre Laube as follows:

“Children – the most innocent of all involved in war and conflicts – often have nothing but their own individual protection mechanism. This mechanism — here Anna’s inner — combines the images of the experience and adds them to a grotesque painting — ominous, but a refuge.

“Always threatened by chaos, fear and death — but there are growing strength, longing and willpower. At the moment of the shooting of her father during the deportation of the family, the gates of her psyche open and accompany her until an indefinite end. In her imagination — and who knows, maybe even in her reality — there is no surrender. Not in life and not in death! As what happens, so consequently the musical themes have a strong bond and can not be separated this time.”

Laube continues, describing Anna as a “personal statement against political and religious fanaticism, the influencing, persecution and oppression of free thinking. I detest the dullness of blind obedience, opportunism and the deadhearted executing of commands. But what Anna hears, sees and feels, is content. Her way is representative of thousands of lowbrow children of her time, also for uncountable war children of past, present and future periods – NO MATTER WHAT ORIGIN!” 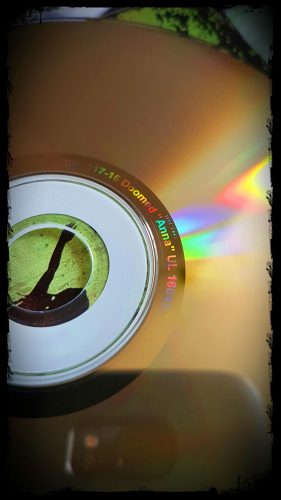 As noted, Anna will be released by Solitude Productions on September 26, and the physical manifestations of the album seem as ambitious and well-crafted as the music. The CD will be delivered with a 20-page booklet, which will also be downloadable as a PDF along with the digital version of the album. There will also be a Wooden Edition limited to 10 copies and including two bonus tracks (“This Seceptive Silence” and “Remembrance”), as well as a 96-page “Book Of Silhouettes” art and photo book, and a poster.

For more information and to order these items from Doomed or Solitude, visit these locations: