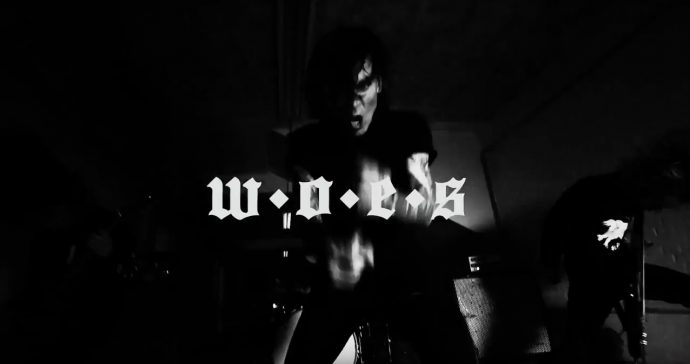 We post lots of premieres for music we like (and only for music we like). The opportunities don’t all come to us through labels and PR representatives. Some of them are requested by bands who are doing their best to spread the word on a DIY basis. That’s how this one came about.

The band is WOES, from Copenhagen, Denmark, and the video is for a new single named “Lost & Alone“. Before watching this video for the first time, I didn’t know what to expect. It left me gasping. 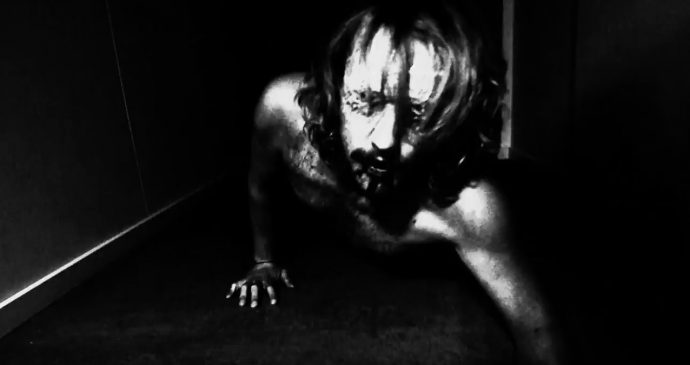 The visual footage is itself a big part of the video’s pulverizing impact. Filmed in black and white, it veers in rapid-fire, strobing fashion among shots of the band violently discharging the music and some poor bleeding, blinded bastard in the throes of agony.

The video is a very good companion for this song, which is a fierce, bleak, head-battering barrage of hardcore fury. The song is a short one, but a dynamic one. While the vocalist tears his throat to shreds in a striking display of boiling ferocity, the music moves from skull-busting hammer-blows to bounding mayhem to slow, dismal, seething. The song is heavy as hell and thoroughly venomous, but also memorable.

Yeah, it didn’t take long to decide that we needed to help spread this around. And it holds up very well to repeat plays.

“Lost & Alone” was recorded at Badcat Studios and was produced, mixed, and mastered by Chris Creutzfeldt. The video was filmed in Kolding, Denmark, by Mindspark Film.

WOES have two previous releases available on Bandcamp, and you can explore those here:

To learn more about the band, visit their Facebook page:

And finally, we’ll share with you the schedule for WOES’ upcoming European tour with the band Tengil. Based on the video, it ought to be a big kick in the ass to see these dudes live.

One Response to “AN NCS VIDEO PREMIERE: WOES — “LOST & ALONE””