Okay, I know some of you are probably laughing, or trying not to laugh. But I’m serious here. Yes, Tim Lambesis tried to hire a hit man to whack his wife and he’s now in prison for that. And yes, he’s now suing personnel at two San Diego County detention facilities for failing to provide medication to ameliorate the side effects of steroid withdrawal, leading to “painfully sensitive breast enlargement”. But even though reports of this latest occurrence are what dragged As I Lay Dying up from the depths of my memory, let’s just put all that embarrassment aside for a few minutes and reflect upon the music of As I Lay Dying.

Actually, I only want to reflect on six songs, two from Shadows Are Security (2005), two from An Ocean Between Us (2007), and two from The Powerless Rise (2010). All but one come with official videos. 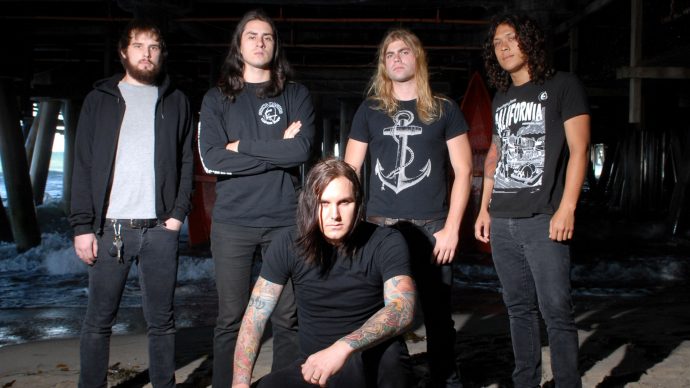 Listening to these songs now seems like revisiting ancient history, even though it really wasn’t so terribly long ago. Back in those days, before metalcore had been beaten to death by tens of thousands of mediocre bands and had become a dirty word in many metal circles, and before I had drifted back into much more extreme fields of listening, I liked this band’s music. There, I said it. It’s the truth.

And the truth is, even now I get more than solely nostalgic pleasure out of re-listening to these songs after so much time away from them.The combination of melodic hooks and aggression (which got more furious over time) struck a chord a decade ago, and it still resonates.

But since I’m being honest, I’ll also have to say that the pleasure is mostly nostalgic; much of the music hasn’t weathered the passage of time as well as most other songs and albums chosen for this Rearview Mirror series, many of which date to the even more distant path.

And it’s also true (in my opinion) that there were other metalcore bands back in the hey-day of the genre that were better than AILD, and whose music has held up better over the last 10 years. I’ll mention Himsa (who were themselves the subject of another Rearview Mirror episode) as one of those, because here in Seattle we’re only about a month away from the band’s reunion show (October 29). For those of you out there who used to have a soft spot for metalcore… or still do… I encourage you to share your favorites in the Comments.

And for those who have been gagging all the way through this post, be patient. It’s Sunday, and that means there’s a Shades of Black feature ahead.

“The Sound of Truth”

“The Only Constant Is Change”

8 Responses to “THE REARVIEW MIRROR (AS I LAY DYING)”