(Todd Manning wrote this review of the new album by Britain’s Winterfylleth.)

The ever-prolific British Black Metal madmen Winterfylleth are poised to release their newest full-length, and first for Spinefarm Records, entitled The Dark Hereafter. Drawing inspiration from Britain’s venerable heritage, Winterfylleth construct their own take on rustic and hypnotic Black Metal.

The group prove once again to be experts in walking the fine line between mood and atmosphere and sheer aural violence. In only five songs lasting around forty minutes, The Dark Hereafter” is able to maneuver a vast number of emotions. Opening tracks “The Dark Hereafter” and “Pariah’s Path” both showcase the band’s more immediate and brutal side. They alternate between blast beats and mid-paced double-bass-heavy sections with powerful, throat-shredding vocals. The riffs are simultaneously melodic yet razor sharp and drenched in distortion. Despite the immediacy of these tracks, they also possess a hypnotic quality as well. This allows for a smooth transition between the first and second halves of the release. 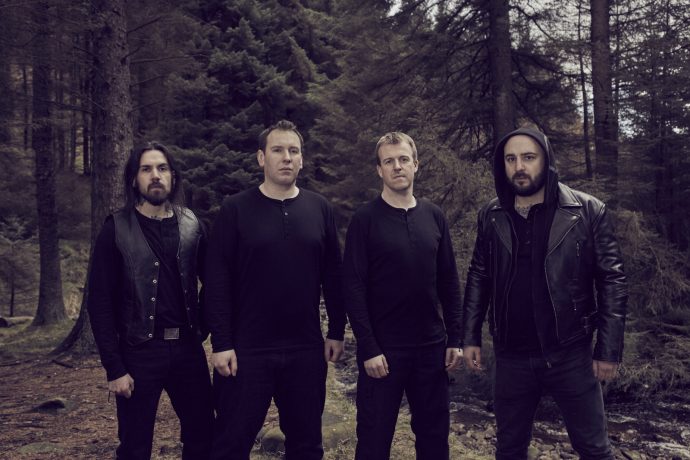 As the album progresses, a more varied sound emerges. By the time the fourth track “The Green Cathedral” rolls around, the multi-faceted approach of Winterfylleth is on full display. The epic thirteen-minute track retains a mid-paced tempo throughout and achieves an atmosphere not entirely unlike Wolves in the Throne Room. The song is very hypnotic but the vocals in particular retain a violent edge consistant with the earlier tracks.

“Led Astray in the Forest Dark” rounds the album out nicely, continuing the expansion of mood that began with “The Green Cathedral”. At this point, the vocals have taken on a melancholic, chant-like quality. The tempo remains reined in, but now the guitar begins interjecting a number of tasteful leads. The track closes with a more up-tempo jig, but more in the vein of Obsequiae and not so much Ensiferum.

If certain types of albums fit certain seasons more than others, this powerful release is an appropriate one with which to bring summer to a close. This type of rustic Black Metal certainly succeeds in evoking the winterscapes of their Norwegian forebearers, but without falling prey to imitation. One would be wise to pick up The Dark Hereafter right away, and be prepared to listen to it frequently over the coming months.

The Dark Hereafter will be released by Candlelight/Spinefarm on September 30, 2016. Physical editions are available here, and digital ones here.

11 Responses to “WINTERFYLLETH: “THE DARK HEREAFTER””