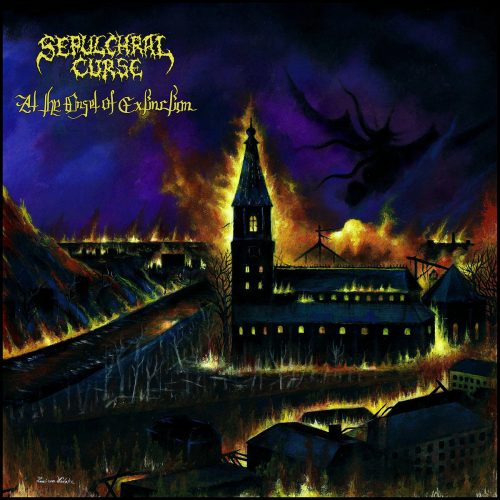 In the spring of this year we premiered the latest album by the Finnish band Solothus (No King Reigns Eternal), along with a review that praised the album as “an artful combination of staggering heaviness, neck-snapping aggression, and cold, alabaster beauty,” one that “generates an atmosphere of emotional collapse and physical decay, but… gets the blood pumping, too.” Little did we know then that Solothus vocalist Kari Kankaanpää was also in the ranks of Sepulchral Curse, whose debut EP A Birth In Death appeared two years ago. And now we also know that Sepulchral Curse have recorded a new EP that will be released in December, the name of which is At the Onset of Extinction.

The first track on the new EP is “Envisioned In Scars“, and we have the premiere of that song for you today. It’s as powerfully appealing as the latest Solothus album, though it diverges significantly — and dynamically — in its musical strategies, culminating in a very interesting display of black/death metal. 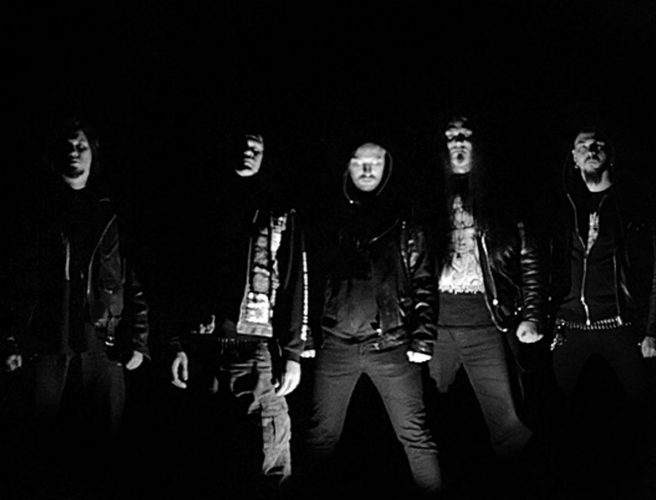 The differences probably shouldn’t be surprising. After all, Kankaanpää is only one member of the band, the others being guitarists Jaakko Riihimäki and Aleksi Luukka, drummer and backing vocalist Tommi Ilmanen, and bassist Niilas Nissilä. And what they’ve accomplished on the song you’re about to hear is an impressive integration of styles and ideas.

There really is a lot going on in this song. There are seething, swarming riffs over a galloping drum beat and a deep, thrumming bass pulse that conjure images of a snake nest in a striking fury. The malignant aura of that display is deepened by cavernous, craggy, bestial vocals and wrenching shrieks. But the song also moves on to hard-rocking riffs and very catchy melodic leads cut from a very different cloth than the earlier dissonance, as well as ominous stomping and acrobatic tumbling from the rhythm section.

In describing At the Onset of Extinction, the press materials we’ve seen make reference to such diverse bands as Convulse, Tribulation, Bölzer, Dissection, Dawn, Naglfar, Demigod, and Putrevore. It will take a good listen to the rest of the EP to assess the accuracy of those references, but even with just this one song, you can begin to understand that choice of signposts.

This new EP will be released by Transcending Obscurity on December 15, 2016 — which is so far away that you may need a reminder later, and we will undoubtedly provide one. The EP includes cover art by the very talented Romanian artist Luciana Nedelea. The track list is as follows:

1. Envisioned in Scars
2. In Purifying Essence
3. Gospel of Bones
4. Disrupting Lights of Extinction

Pre-orders can be placed now at this location, where you can also find the band’s previous EP:

2 Responses to “AN NCS PREMIERE: SEPULCHRAL CURSE — “ENVISIONED IN SCARS””