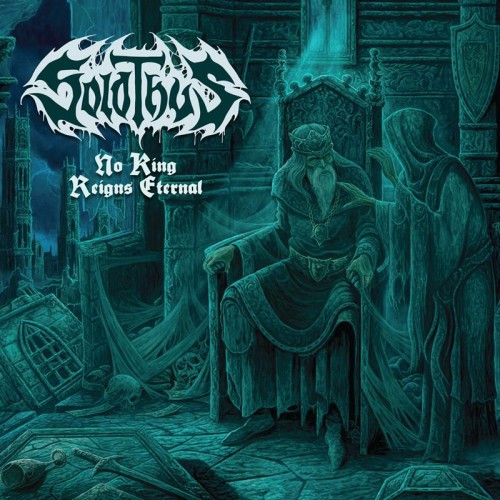 Finland’s Solothus made a powerful full-length debut with their 2013 album Summoned From the Void reviewed here) — so powerful that one might not have expected them to climb much higher with their next album. But they have. The new work is named No King Reigns Eternal, and you can listen to it here in its entirety.

The new album blends many of the same ingredients that were present in Summoned From the Void, yet the songwriting is even stronger, the wrenching melodies even more memorable, the guitar performances even more exceptional and varied, and the overall emotional impact of the album even more potent. 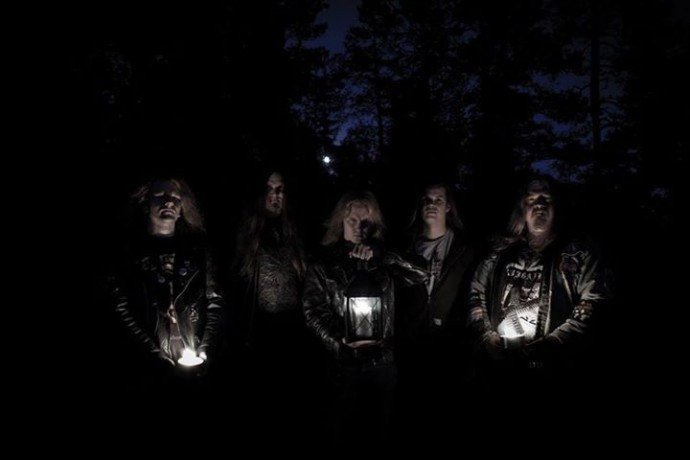 No King Reigns Eternal is an artful combination of staggering heaviness, neck-snapping aggression, and cold, alabaster beauty. It generates an atmosphere of emotional collapse and physical decay, but it gets the blood pumping, too.

The iron backbone of the album is of course doom, anchored by huge, groaning riffs and bleak, bereft melodies that flow like a slow river of tears into a lake of death. Kari Kankaanpää’s cavernous, guttural growls are staggering, and a fine match for the music’s massive, crawling weight.

But Solothus continue to display a fine sense of dynamics, breaking the generally mid-paced rumbles in different ways — sometimes dropping the pace even further, into the dying crawl of funeral doom, and sometimes ramping up the tempo and the riffs into head-hammering chugs or rapid-fire jabs that sound like a death metal freight train rushing right at you. And the capable drumwork on this album feeds life into even the slowest and most dismal passages, just as Kankaanpää picks his moments to unleash throaty, enraged yells and impassioned, anguished howls. 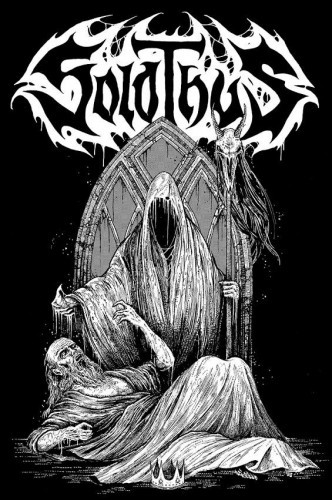 The album also showcases one memorable guitar performance after another, thanks to the duo of Veli-Matti Karjalainen and Sami Iivonen. As much as the riffs moan and groan like wounded behemoths, the guitar solos and harmonies are often high, serpentine, and sensuous. They are, of course, sodden with sorrow, but also soulful and spellbinding. The standout guitar solo in “Malignant Caress” soars like a hawk seeking the sun in a grey winter sky, and there are some thick, melodic riffs in the album that could almost be at home in an album of desert stoner rock — though here they’re surrounded by cold, mountainous crags.

As they did on Summoned From the Void, Solothus end the album with an especially long song — here, “The Winds of Desolation”, which breaks the ten-minute mark. The song’s wraith-like lead guitar gets the hooks in immediately, and then the enormous riffs and drum blows hammer them in. As the music collapses into a ponderous drag, you get one sinuous solo, and then a longer and even more scintillating one after the band roll out a massively headbangable rocking jam that carries the album to a close.

In a nutshell, this is a fantastic album that turns out to have more facets than you might expect — it’s solid as granite from beginning to end and likely to stand the test of time.

No King Reigns Eternal will be released by Doomentia Records and it’s available of pre-order HERE. Doomentia will provide a digital version via Bandcamp as well. The great cover art is by Juanjo Castellano (and Mark Riddick crafted the second illustration in this post, for a Solothus t-shirt).

8 Responses to “AN NCS ALBUM PREMIERE (AND A REVIEW): SOLOTHUS — “NO KING REIGNS ETERNAL””