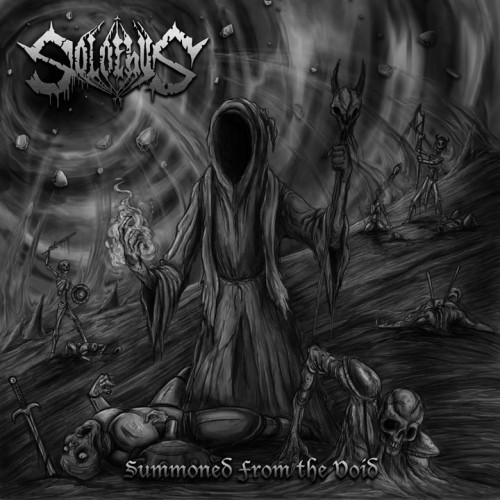 In late 2011 a Finnish band named Solothus released their debut demo, Ritual of the Horned Skull. It drew praise from many reputable sources, but I, being irreparably half-assed, failed to track it down. However, because half of my ass does work reasonably well, I didn’t miss out on a second chance — the chance to hear the band’s forthcoming debut album, Summoned From the Void.

And what do Solothus summon from the void? They summon the gloom of a black storm front, the massive power of a swelling tide, and the chill of a crypt, and they transport all that straight into the listener’s mind — along with melodies both morbid and soulful, and compelling riffs that run the gamut from glacial to galloping.

Some hint of the music’s power comes in the instrumental introductory track, “Frostbane Overture”, as the magisterial sounds of a cathedral organ rise up within the vault, but the peaceful, meditative piano melody that joins the organ music may be a misdirection, for the air soon becomes thick with the atmosphere of doom.

Ancient doom is much of what weights the music — ponderous, booming guitar chords bathed in distortion; anvil-thick bass notes that sound like girders collapsing in slow motion; funereal drumbeats that pound like the steps of giants; bereft melodies moaning the grief of lost souls; and gravelly vocals as deep as ocean trenches, sometimes rising in ghastly howls. It sinks you at the same time as the powerful riffs get your head moving.

If you’re in the mood for the meat, menace, and melancholy melodies of old-school doom, then Solothus delivers. That part of their music is downright cataclysmic, fired from within by reverberating guitar solos that swirl and scream like wraiths loosed from a tomb.

But that’s not the only part of the music. Here and there within the bleak phalanx of despair, the pace quickens, and big crunchy riffs start chugging like a death metal freight train. The songs rumble and roll, rocking hard to the heavy rhythms while those ghastly vocals continue their cavernous proclamations, before the music collapses again into a moaning, groaning crawl. The best of those moments comes in the middle part of “Plaguewing”, but they’re to be found in every song.

The album closes with an 11 1/2 minute monster of a track, “Upon Shattered Lands”. It begins with harsh, reverberating guitar notes joined by a gut-busting bass line and slow, grim drumbeats. The combined effect is catastrophic; the music staggers like a mortally wounded giant.  The song then accelerates into a bounding gait with fat chugging riffs that will get heads banging hard, alternating with booming doom chords. But in the last half of the song the music transforms into genuine funeral doom, as slow as the movement of continents and almost as massive, with growls so deep and heartless that they become the wordless voice of the void.

Both atmospheric and laced with compelling narcotic riffs, Summoned From the Void is a mix of doom and death metal that should appeal to fans of Hooded Menace and Coffins, while keeping the faith with traditions that began with the early releases of Cathedral, Paradise Lost, and Candlemass.

Summoned From the Void is scheduled for release by the Spanish label Memento Mori on July 2. Relevant links are below, plus a stream of the album’s recently released title track (both the YouTube and Soundcloud streams are included).

4 Responses to “SOLOTHUS: “SUMMONED FROM THE VOID””