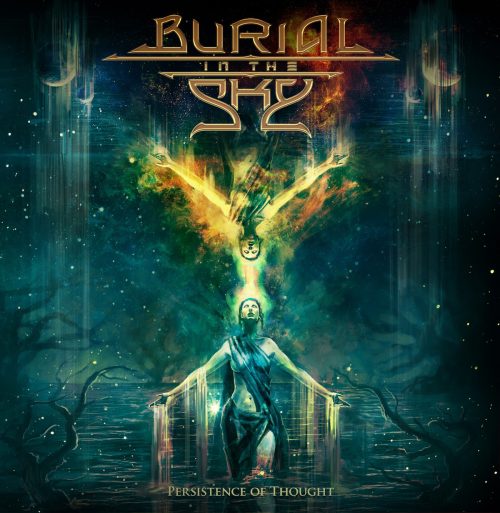 (Austin Weber brings us this premiere of a new song by the Pennsylvania band Burial In the Sky.)

In the least few years, the technical death metal scene has undergone some very interesting mutations that have helped push the genre forward. Within this field of growth there seem to be two camps, one moving toward more atonal, skronky tech-death inspired by groups like Gorguts, Ulcerate, and Deathspell Omega, and another propagating a more atmospheric and proggy sound inspired by groups like Fallujah and Rivers Of Nihil. While I’m a fan of both takes on the sound, the group I’m covering today falls into the latter category.

While I can honestly say that Burial In The Sky are doing their own thing, influences from both Rivers Of Nihil and Fallujah can be heard at times, though the music is less imitative per se than in the way it’s been done recently by a few other groups. Having heard all of their new album early, I can also state with certainty that their form of atmospheric tech-death often encompasses a near-ambient psychedelic feeling that is uniquely their own.

I first heard Burial In The Sky last year when I was (late to) covering their 2014 demo, which showed a lot of promise. Thankfully, they’ve seized upon their initial potential in order to craft a stunning debut album called Persistence Of Thought. The group’s core consists of guitarists and (multi-instrumentalists) William Okronglis (Vocals/Rhythm Guitar, other instruments) and James Tomedi (Lead Guitar, other instruments), and they are joined on Persistence Of Thought by drummer Samus Paulicelli of Decrepit Birth fame.

So obviously, I’m very happy that we’re allowed to premiere “Galaxy of Ghosts” today, the first single to premiere from their album. While the song starts out on a vicious hell-bent rampage, it soon finds space to expand and grow, becoming a more ethereal and progressive death metal-minded song as it unfolds, broken up by several headbanging grooves and beautiful overlaid lead-guitar segments and followed by snippets from a Winston Churchill speech. The further along it goes, the more cerebral and calming it becomes, while still retaining the signature aggression and rage that death metal is known for.

But damn, when “Galaxy of Ghosts” decides it wants to switch gears into a more atmospheric-focused place, it truly reaches its most blissful and memorable moments as a song, almost as if it is reaching out for something higher, something to calm the soul, while tempering its own lofty aims with the earth-scorching reality of life as it is in spite of seeking transcendence.

If you dig what you’re hearing, Persistence Of Thought comes out on Friday, November 4th. So, since that’s a bit away from now, be sure to follow them over on their Facebook Page listed below. To pre-order the album, go over to their Bandcamp page linked below.

4 Responses to “A NCS PREMIERE: BURIAL IN THE SKY — “GALAXY OF GHOSTS””