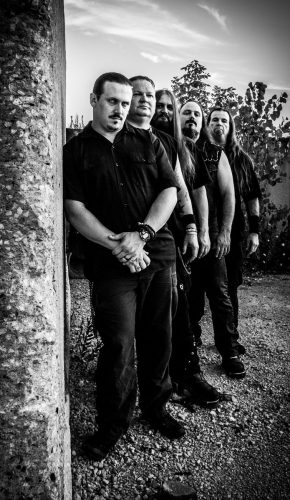 (In this September edition of THE SYNN REPORT, Andy reviews the discography of Ohio’s Shatter Messiah.)

I want to start off this edition of The Synn Report with a quick history lesson, if I may? You see, back when Islander first started this site with his two cantankerous compatriots, the name “NoCleanSinging” was chosen as a response to the horrible proliferation of bands roughly shoehorning a sickeningly saccharine clean-sung chorus into every song in a vain attempt to appear more artificially “emotional” or to improve their commercial viability.

However, you may have observed that, in the past few years at least, we’ve not stuck quite as closely to that “no clean singing” ethos as Islander and co. did in those early days… which is why today I have no hesitation in bringing you an overview of the four album catalogue of Akron, Ohio Power-Thrash quintet Shatter Messiah.

Of course it’s impossible to ignore how much the band have in common with the much-missed, much-mourned Nevermore… not least a certain guitarist (and main songwriter) by the name of Curran Murphy. In addition the raw, gritty melodies of singer Greg Wagner (and, later, his replacement Michael Duncan) carry the same sense of spite and venom as Warrell Dane at his most vehement, as well as sharing a similarly indignant anti-religious, anti-authoritarian lyrical stance.

And then there’s the guitar work, Murphy and his chums delivering a plethora of massive, Loomis-esque seven-string tech-thrash riffs and soaring, fleet-fingered lead-lines (that would make the Amott brothers nod their head in serious appreciation) which mix proggy intricacy and dark melody with a brand of heaviness that occasionally borders on Death Metal levels. 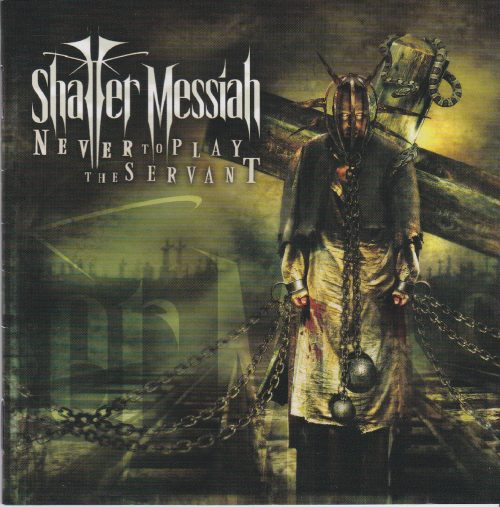 The title track to Shatter Messiah’s debut album races out of the gate in a cavalcade of hard-edged riffs and bleakly infectious leads courtesy of the guitar tag-team of Dusty Holt and Curran Murphy, followed in quick succession by the notably heavier, choppier strains of “Crucify Freedom”.

Vocalist Greg Wagner continues to acquit himself admirably on the staccato swing of “Frailty”, delivering multiple layers of soaring melody without sacrificing the rougher, rawer edge to his singing – even dipping into a legitimately harsher style at times – something which continues through into the densely-packed chugathon of “Hatred Divine”, one of the album’s heaviest numbers.

That isn’t to say that the rest of Never to Play the Servant is a lightweight affair though. Both “Fear to Succeed” and “Inflicted” offer a short, sharp blast of brutally efficient, thrastastic aggression, while “All Sainted Sinners” and “Drinking Joy, Bitter Loss” go for a more expansive and more melodic approach which allows Wagner to let his vocals soar a little more, and let the band as a whole stretch their dynamic muscles a little further

“Bad Blood” is a punishing piece of pounding riffs and rumbling kicks that practically hammers its way into your skull via the medium of pure blunt-force trauma, while “Blasphemy Feeder” – with its writhing, technically tormented riffs and grisly, desperate vocals – could easily be a hitherto undiscovered Nevermore track.

At a full fourteen tracks and a solid fifty-nine minutes in length, Never to Play the Servant is definitely a little bit too long in the tooth for its own good, but it’s hard to call any of the songs unnecessary or superfluous exactly. In fact both the morbid balladry of “Deny God” (whose first line is “This godless endeavour…” which just has to be a direct reference to Murphy’s previous band) and the similarly Nevermore-esque “Disillusion” (which sees drummer Robert Falzano putting on his own kick-drum clinic) are amongst the best songs on the entire album.

Following the stomping sturm und drang of “Bleed to Shadows”, NtPtS closes with the metallic tour de force that is “New Kleen Killing Machine”, which sees every one of the quintet (including hitherto underappreciated bassist Ron Boisvert) cutting loose on their respective instruments in suitably storming style, ending the album on a simultaneously creepy and crushing note. 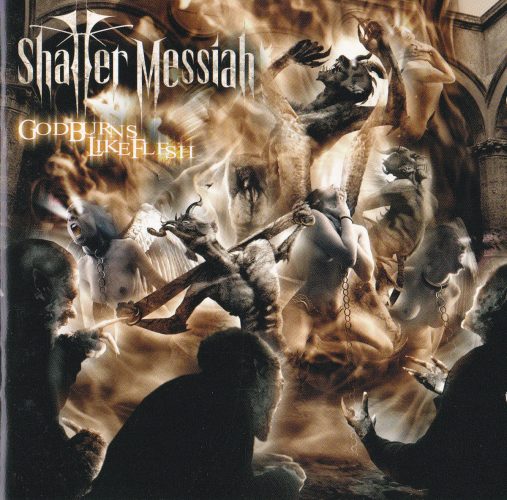 It quickly becomes apparent during the razor-sharp “Idolater” that the band’s second album is a big step-up from their (not inconsiderable) debut. In fact, with an altogether bigger, heavier, richer sound, God Burns Like Flesh is just a better put together record than its predecessor in practically every way (and is also still my favourite of the band’s releases).

The aforementioned “Idolater” is one hell of an opener, showcasing the band’s newly refined blend of molten riffage, pulse-quickening drums, and keen-edged vocal hooks (particularly during the venomous, instantly memorable chorus). It’s followed by the two-part title track, with “Part I” melding bulldozing chuggery and darkly seductive vocal melodies with unexpected eruptions of blast-beaten intensity, while “Part II” goes for a more proggy, more ominous approach, crowned by a scintillating mid-song solo section and a shockingly heavy finale.

The opening riff and solo assault of “Pathway” has more than a touch of Heartwork-era Carcass to it, with Falzano’s drums going hell-for-leather underneath it all, and the whole song just has that same seamless balance between almost-Death-Metal-level intensity and Prog/Power grandiosity to it that Messrs. Dane, Loomis, Sheppard, and Williams once made their own..

The irrepressible flair for fearless melody and subtle harmony displayed by Holt and Murphy on “Stripped of Faith” (which also has another strikingly memorable chorus) is a sight/sound for sore eyes/ears, the two men trading barbed riffs and bleeding solos with almost contemptuous ease, while the brooding “Dirge of Christ” takes things in a much darker direction, Wagner’s powerful and potent delivery holding court over a swathe of crunchy, cutting riffs and fretboard-splintering leads.

At over seven minutes in length “Buried in Black” is certainly an ambitious number, kicking off with a sudden shock of blast-beats and blistering, tremolo’d guitar work, followed rapidly by a veritable rollercoaster ride of devastatingly deathly riffs and acerbic vocal melodies, mixing heaving metallic power and calculated progressive design in equal measure.

The album closes with the one-two punch of “This Is The Day” and “Tomorrow Immortal”, the former coming across like an unholy union of early Arch Enemy and latter-day Nevermore, with more hooks and sharp edges than your local abattoir, while the latter is another ambitiously constructed Prog-powered behemoth, with Wagner delivering a poignantly morbid and melancholy performance over the top of seven minutes’ worth of twisting, tumultuous riffs and riveting dynamic shifts. 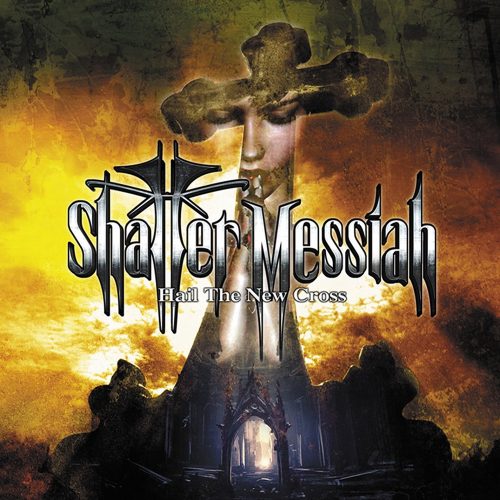 Difficult to track down at the moment, the band’s third album is also their first with new singer Michael Duncan, who immediately stamps his presence and authority all over shamelessly extravagant opener “Disconnecting” with a voice that not only reminds me a lot more of early Firewind (with a hint of a more aggressive Rob Halford) than his predecessor, but which also fits well with the more melodic, more anthemic vibe of this album.

That’s not to say the band have necessarily softened their approach (or, at least, not very much) on album number three, as both Curran Murphy and new guitarist Pat Gibson play up an absolute storm on “Future Falls”, as does the highly underrated Robert Falzano behind the kit, bringing some impressively nuanced stick and cymbal work to the table alongside his usual battery of furious kicks, while the single-worthy “Memory Flames” is built around a searing array of raging riffs and one ludicrously catchy chorus, alongside an immensely impressive vocal performance from Duncan, who spits forth every line with a brilliant mix of cathartic energy and pure conviction.

“How Deep the Scar” ups the intensity a couple of notches with its thundering cannonade of punchy drum work and furious, down-picked riffage, topped off with a plethora of bleak, eerie vocal melodies and absolutely fret-scorching solos, whereas “Loyal Betrayer” goes for an almost melodeath-level of hooky, galloping riffery and taut, thrashable rhythms, building to a prodigious, soaring chorus refrain that will immediately set up shop in your frontal lobe and refuse to leave for several days.

There’s a vital and visceral sense of aggression to “Gods of Divinity” which comes through in every scything, cutting riff and pounding drum beat, balanced out by the ominous, proggy melody of the track’s chorus, after which the thrilling “Mercenary Man” (ever so slightly clichéd lyrics aside) unveils itself to be a surprisingly technical number which provides both Murphy and Gibson ample room and opportunity to showcase their prodigious seven-string skills.

The album ends with the multi-faceted “This Addiction”, which matches equal parts morose melody and iron-clad intensity alongside a moody, melancholy chorus refrain, and a plethora of scintillating lead parts and towering riffs, closing things out on a strikingly enigmatic and subtly proggy note.

(Unfortunately it appears that Hail the New Cross isn’t available on Bandcamp, or anywhere else, where we can embed the album to listen to. So, instead, please enjoy the YouTube link to “Memory Flame” below, which is one of my favourite songs from the album.) 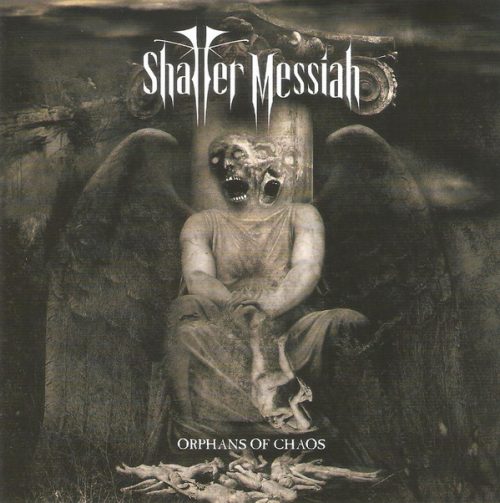 In contrast to the more overtly melodic (though still thrashy) style of their previous album, Orphans of Chaos sees something of a return to the darker, more Nevermore-esque sound of their first two albums, kicking off with the muscular metallic might and chunky, churning riffs of “Fixx for Demise”, swiftly followed by the high-velocity thrash-and-blast attack of early-album highlight “Shallow”, and the crushing, pseudo-Death Metal of “Slave” (which, in places, is amongst the heaviest tracks the band have written thus far).

“Forget Forgiveness” has an almost classic, mid-paced Thrash vibe to it strongly reminiscent of old-school Testament (particularly during both of the track’s oh-so-short, but ever so sweet, solo sections) — only heavier and tighter and more modern in tone and delivery — and this comparison continues to hold water during the speedier, and noticeably more melodic, “Nothing Friend”, which also features some particularly stunning lead guitar work courtesy of Murphy’s frenetic fretboard antics.

The creeping slow-build of “The Mad Man Lies” eventually culminates in a gargantuan, goth-tinged chorus refrain drawn straight the annals of Dead Heart in a Dead World, whilst the succinctly titled “Doom” pushes things even further into the doomier, gloomier, depths, and also happens to be one of the album’s best tracks.

“Disruption” picks up the pace a little more, with Kelly Conlon’s rumbling, grumbling basslines laying down a thick canvas for Murphy and Gibson to paint riff after red-hot riff on, while Duncan continues to shine behind the mic, particularly when pouring his heart out during the track’s unexpectedly proggy and poignant second half.

“Thoughtless, Timeless” doubles down on those early Nevermore comparisons pretty hard, but also brings a bleakly epic vibe to bear during its lead-guitar-saturated chorus, after which the listener is treated to the mechanised riffs and rippling, syncopated kick-drums of “Cold and Alone”, which is definitely one of the heaviest and best tracks on the album, complete with a gorgeously melancholy chorus and an endlessly enigmatic, light-and-shade, sense of dynamic.

Orphans of Chaos concludes with the unsettling anti-balladry of “Free” which, for its first half, seems to channel only the darkest side of Pink Floyd’s infamous moon, before breaking… free… in the second half in a shameless display of gloriously anthemic vocals and sweeping, histrionic solo work.