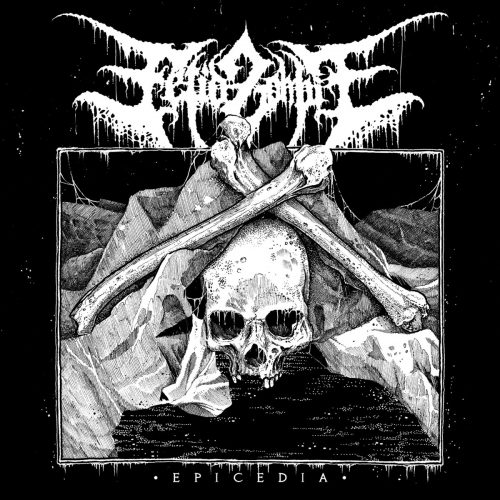 A few people reading these words might not recognize the name Mark Riddick, but I’m guessing it’s a small percentage. Since 1991 he has been creating gruesome artwork for a countless number of album covers, posters, shirts, and more… and although he has been often copied, his style is so distinctive that you know a Riddick piece when you see it.

But I would guess that a larger percentage of readers don’t know that Riddick is also a vocalist and musician who has been involved in both bands and solo projects for about as long as he’s been making visual art. One of his solo projects is Fetid Zombie, and the new album Epicedia will be the sixth full-length created since 2008 (along with an EP and a large number of splits).

Epicedia is set for release on November 25 by Transcending Obscurity Records. So far, one song from the album (“Devour the Virtuous”) has premiered at DECIBEL along with an interview, and today we’ve got another one for you — “If the Dead Could Speak“. 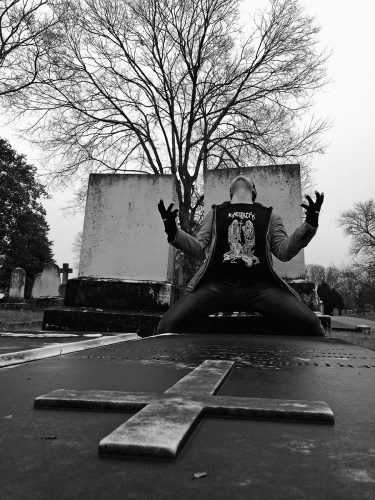 Riddick handles vocals, guitar, bass, drum programming, and synths on Epicedia, but he also enlisted vocal and instrumental contributions from these notable guests:

Now, if you’ve been paying attention, you’ll have surmised that there are only four tracks on the album — and let’s put the song titles in place of those Roman numerals:

1.  Lowered Beneath
2. Devour the Virtuous
3. Devour the Innocent
4. If the Dead Could Speak

Now you’ll be able to see that the song we’re premiering includes guest vocals by Ralf Hauber and Dawn Desiree, along with guitar contributions by Jamie Whyte, Josh Fleischer, and Toby Knapp.

You may have also deduced by now that these songs are longer than average. In fact, they’re all over 8 minutes long, and “If the Dead Could Speak” exceeds 10 minutes. That’s a rarity in the world of festering, old-school death metal — which is how one could possibly classify this album at a very high level. But “at a very high level” isn’t how anyone should be talking about Epicedia, and “If the Dead Could Speak” tells us why, all by itself.

The song does have a diseased, spooky, midnight-graveyard air about it as well as monstrous vocals, but there’s a lot more going on here than a sinister, paranormal atmosphere. For one thing, the song really rocks — the main riff is a serious headbanger, and it rides more on backbeats than blast-beats and double-bass. For another thing, there’s a whole smorgasbord of lead guitar lines and solos on the song that are so fluid, fiery, and creative that they’re worth hearing all by themselves.

But there’s still more. There are, for example, some beautiful ambient interludes that aren’t par for the course, as well as streamers of melody that flow through the track which push the music well outside the envelope of mouldering decay and reanimated corpses. Riddick has said that the song “covers the theme of grief and coping”, and you can hear that in the music.

The 10+ minutes pass by before you know it, with the song still ringing in your head. As this track shows, Fetid Zombie works on multiple levels — drawing on multiple metal traditions, the music is mentally and emotionally engrossing as well as authentically morbid. It branches off from the main line that comes from the crypt, with a compositional maturity that puts Epicedia in front of everything Riddick has done with this project before.

To pre-order the album, use the first link below. And if you missed “Devour the Virtuous”, I’ve included a stream of that track right after our premiere.

4 Responses to “AN NCS PREMIERE: FETID ZOMBIE — “IF THE DEAD COULD SPEAK””