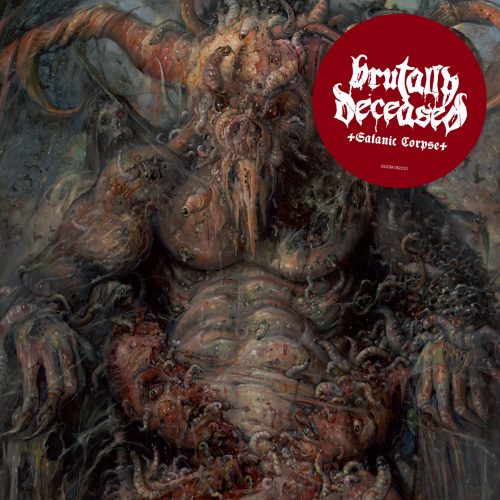 Armed with a hellish imagination and the artistic talent to bring his nightmares to life on canvas, Paolo Girardi has executed an extensive array of album covers in his career, but none more monstrous than the one that’s savaging your eyeballs right now. And what’s more, this grotesquery is a perfect match for the strikingly savage music that lies within this particular album. And that album is Satanic Corpse by a group of Czech death dealers named Brutally Deceased. It’s being released by Doomentia, and we have for you a full stream of the album right here, right now.

We have some history with this band. Our first post about them appeared back in January 2011, with a review of their debut album Dead Lover’s Guide, decorated with photos of gigantic chainsaws — because the HM-2 force is strong with these ones, and has remained so through today.

They followed Dead Lover’s Guide with a second album named Black Infernal Vortex in 2014, and with this new album they’ve continued their steadily upward climb. It’s their best work yet, and one of the best death metal albums you’ll come across this year.

Satanic Corpse is an electrifying 30-minute tour of a war zone — no white flags, no cease-fires, no inclination to negotiate, all slaughter all the time. One obliterating barrage after another, the songs are a combination of furious, swarming riffs, cannon-shelling drumwork that will leave listeners mangled and torn with holes, slithering viper-like guitar leads, and roaring vocal fury. The rampaging is merciless and the grooves hit like pile-drivers on a planet-busting scale.

There are a few slightly more mid-paced thunderers salted within the album as song introductions or curtain-openers for solos, but all in all, this album is relentless. Yet although it may leave listeners battered and breathless, it never wears out its savage welcome, and credit for that goes not only to the skill of the performers but also to the quality of the songcraft.

There’s a lot to be said for wielding the smoking, skull-crushing power of an axe on HM-2 steroids — and Brutally Deceased do that like they started studying the techniques in the womb. But this album stands out for other reasons as well — and the guitar solos are at the head of the list. They’re scintillating, sparkling, and in a style you may not expect from music that’s so steeped in the traditions of Swedish death metal. If you want the best example of this, listen to “At One With the Dead”, which features a dual-guitar solo that’s probably the best of a fine lot on the album.

The whole album is fine. Dive all the way in, but just make sure you’ve got a good supply of tourniquets, splints, and bandages close at hand.

2 Responses to “AN NCS PREMIERE (AND A REVIEW): BRUTALLY DECEASED — “SATANIC CORPSE””