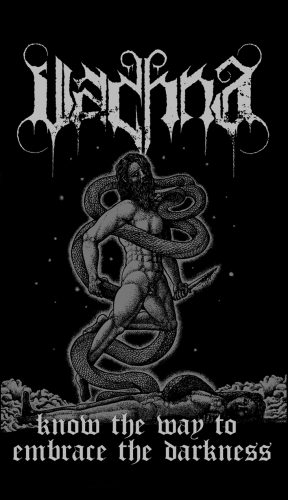 Metal is such a diverse form of music that the inspirations and objectives of its legions of creators are too numerous to count — but exploring and embracing darkness has undeniably been both a guiding force for many bands and a source of attraction for many fans from the beginning. As the title of the debut EP by Italy’s Vashna suggests, they have quickly proven that they know the way to embrace the darkness — or at least one especially harrowing and ruinous way to do that.

The first strike by this one-man band will be released on tape in just a few days (October 7) by Eternal Death. Know the Way To Embrace the Darkness includes three songs as well as two “hidden” bonus tracks, and today we’re providing a chance for you to hear the full EP in advance of its release.

Vashna plumbs the darkness in a way that deluges the listener in a tidal wave of suffocating and oppressive sound, assaulting the senses with rushing walls of murky, distorted guitar noise and rolling blasts of inhumanly fast percussive pistoning. Deep, dismal riffs and frenzied guitar leads tunnel through the maelstrom, accompanied by wild, bestial howls and roars. The torrential storming is segmented in a way that replaces the deluge with staggering rhythms and massive hammer blows, with those bludgeoning chords ringing out even more desolate anti-melodies of doom.

This is the kind of black/death warfare that seems intent on sucking you into a pitch-black vortex. It swirls and tears with primal savage force and allows no light to intrude upon its nightmarish visions. Fans of such bands as Portal and Impetuous Ritual will definitely want to check this out.

To pre-order Know the Way To Embrace the Darkness on tape or digitally, visit this page:

3 Responses to “AN NCS EP PREMIERE: VASHNA — “KNOW THE WAY TO EMBRACE THE DARKNESS””