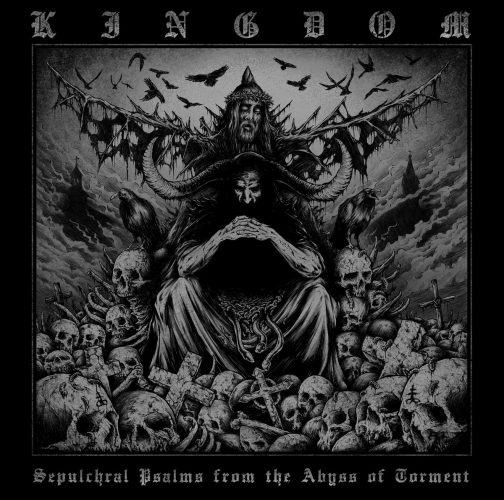 On October 28 Godz Ov War Productions will release the third album, Sepulchral Psalms From The Abyss Of Torment, by the Polish blackened death metal power trio Kingdom. Today’s it’s our pleasure to present the premiere stream of the album’s third track, “Forsaken Tribe“.

A song like this warrants a warning: If you have body armor handy, it would be wise to strap it on, and stretching your neck muscles would be a good idea, too. “Forsaken Tribe” is a megaton crusher, and when Kingdom really shift into rampaging gear at the 0:40 mark, it becomes a hell of a headbang trigger, too. 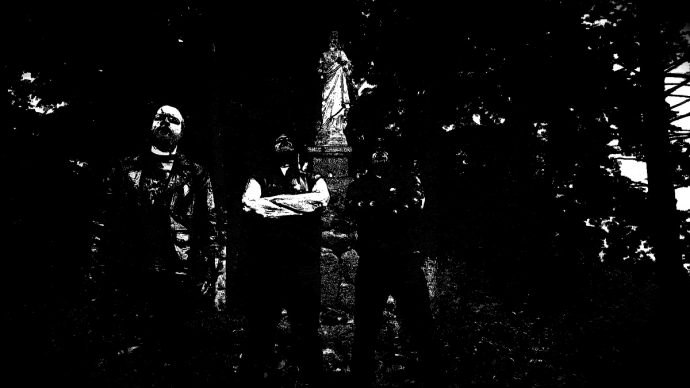 Part of the song’s striking power derives from the massive bass and drum sound, which resembles something like a rumbling, concrete-shattering demolition machine. The corrosive, braying riffs are morbid and merciless, while the deep, roaring vocals give the music a tyrannical aura, in praise of the ancient wolf tribe. And when the song slows, the lead guitar melody oozes like a thick, hallucinogenic poison.

In a nutshell, what Kingdom succeed in doing with the rumbling juggernaut of “Forsaken Tribe”, and with the album as a whole, is deliver skull-crushing savagery in a way that sticks the music in your head and gets your head moving at the same time.

Enjoy “Forsaken Tribe” below, along with a stream of two previously released tracks, “Black Rain Upon the Mountain of Doom” and “Whispering the Incantation of Eternal Fire”. To order the album, and for more information about the band and the release, follow these links: