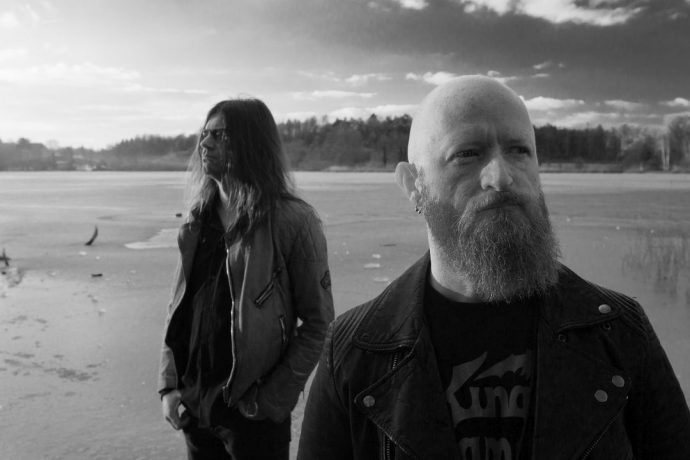 I bet that fans of right traditional doom metal have heard about the Swiss band Wolf Counsel because of their debut Vol.1 – Wolf Counsel released just one year ago, performing confident and strong doom material in the vein of the forefathers of this genre. But as for me, I almost missed the release of Wolf Counsel’s sophomore work Ironclad, which saw the light of day in September 2016. And you know… this album is an excellent example of flawless doom metal, and after a few listenings I was motivated enough to send questions to Wolf Counsel’s leader Ralf Winzer Garcia (bass, vocals).

Hello Ralf! Thanks for the time you found to answer my questions about Wolf Counsel and your fresh work Ironclad. And here’s the first question — you played in faster bands in the early years of your musical career, so what drove you to choose the slower doom metal direction?

Hello Aleks, my pleasure. Thank you for the opportunity to talk about our music. Well the idea or let’s say the urge to play in a Doom band has accompanied me for a very long time. I think since the mid-1990s or so. Since the late ’80s I always had the chance to play in metal bands but there never was a band around to join that played in a slower or very slow direction. I was always drawn towards slow and heavy riffs, huge walls of sound, and a kind of eerie and gloomy atmosphere. Even the slower songs in my faster bands or like some song intros that were played with only a few open chords and an epic feel were always my favorite.

Black Sabbath’s Born Again was my first I think, and of course the first live LP from Saint Vitus and so on. I even can remember buying the debut album of a band called Dream Death, which had quite an impact on me. 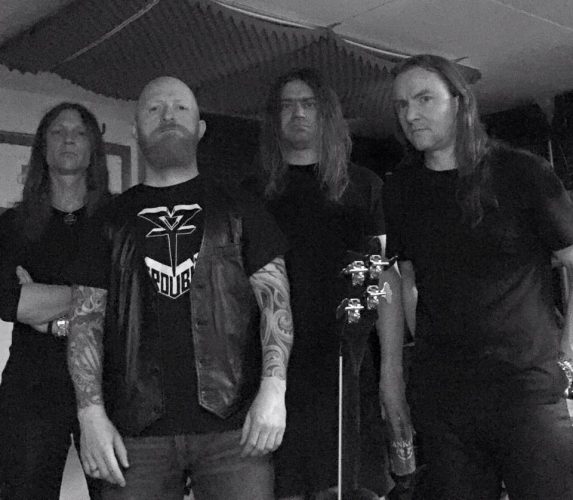 Switzerland isn’t a big country, but Wolf Counsel looks like a real full-time band. How did you gather this team under the Wolf’s banner?

That’s true, Switzerland is a very small country compared to other countries in Europe but it has a very high percentage of active musicians. Originally I’m from southern Germany and moved to Switzerland many years ago. I even played in bands here before I moved, so I knew my way around.

So yes, Wolf Counsel is a real full-time band, our lifeblood and my priority. Reto our drummer is a very old friend of mine with whom I played in another band for like 12 years. He actually talked me into playing live with Wolf Counsel, which wasn’t the plan in the first place. Then we have the guitar players Ralph (almost the same name as mine but with “ph”) and André, who were playing in a band with Reto before. So we’re all like old colleagues and fellow peers as musicians.We all read notes, sheet music, etc. so it’s very easy to work together in regards to learning new songs, etc.

Andreas Reinhart, another old friend of mine, wrote and played the entire guitar solos on both albums and he will be joining us for future live shows if one of the other two guitarists aren’t available because of their commitments to other bands. So it works very smooth and well.

Your way from the debut Vol 1 – Wolf Counsel to the Ironclad album is pretty short — it seems that you finished the second full-length album after just the one year. Were you really so focused on the result? How long did you labor over this material?

I’m always focused on writing even when it’s only about small pieces of music or some words or lines of lyrics. Well, I understand that it looks kind of fast from an outside perspective but I’m always working on things and gather little pieces here and there. So over time the stuff piles up and I’ve a lot of basic structures to create full songs.

The experience of the debut helped a lot to nurture the songs for Ironclad, of course. So I knew what I wanted to make different and what to change, as to bringing in new elements and harmony lines and so on. I worked on the instrumental part for like 3-4 months and gave the material to Reto so that he could write his drum parts. After that was finished I wrote the rest of the lyrics and the vocal lines plus called Andreas to create the guitar solos. So I guess, combined, the whole writing process took about 6-7 months in total. 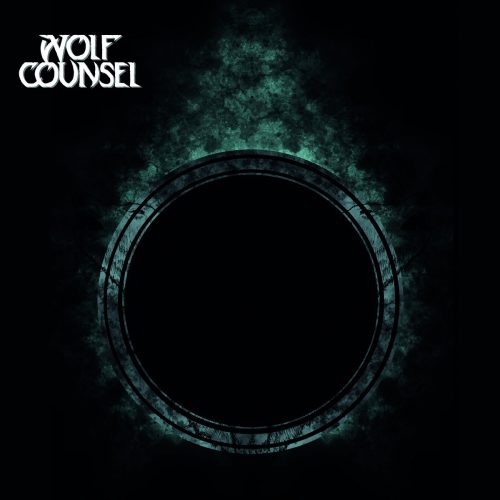 Vol 1 – Wolf Counsel is an organic and confident example of true doom metal, but now when just one year has passed since its release and you have a brand new album on your hands, how do you value your first effort in exploring doom territories?

Well that’s a tough one. I still love the debut very much and we even play like 1 to 3 songs from this album in our live shows. There are some things I would have made different now in retrospect, like some vocal lines, but mainly I would change the sound and the mix, even though the debut has this kind of very raw and special feeling. It’s hard to describe that with words. All of the more unique Wolf Counsel elements are already there, but still in its infancy I think. It’s just special to me, of course, but that’s just my feeling. Well maybe some day we will re-record 1 or 2 songs from the debut in a new garment of sound.

Ralf, it seems that you’re the mastermind of Wolf Counsel, do you allow the other members to take part in the process?

Well I started the whole thing. It was my brainchild for a very long time, but of course all the other members can write, and contribute in whatever way they feel is right for them. Reto (Drums) was and is a big part of the overall writing process, of course. I’m always happy to get influenced by my fellow musicians and friends and would use their ideas as well. At the moment the main writers are Reto and I, but we’ll see what the future holds. Maybe the songs of the next album will be from each one of us, who knows. 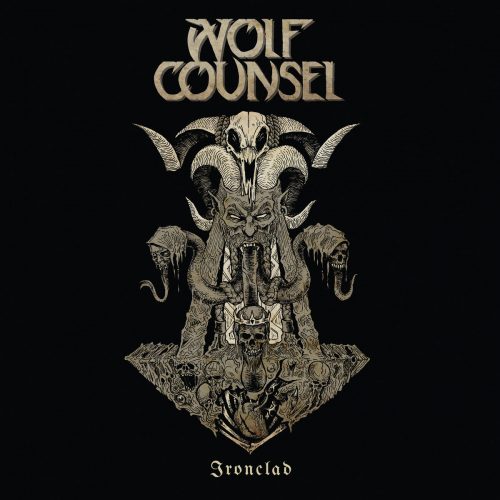 How did this recording session go? How much time did you spend on Ironclad?

It was very fast due to the fact that we are always very well-prepared before entering a studio. I guess the overall experience with other bands in the past paid out in a way. We recorded in a studio called Little Creek here in Switzerland near Basel. The studio is owned and operated by an old friend of mine, V.O. Pulver. He’s a real sound specialist and nerd when it comes to creating a very warm but heavy feel for a record. So it was almost like playing at home. I think we spent two days on the drums, another three on the rest, plus two days mixing and mastering, so we did the album in something like a week.

The songs build literally the very essence of doom. What formed your vision of Wolf Counsel? How did you see the band when you started it?

I just wanted to catch that very old school way of playing that kind of music. In addition I was always super keen on having very catchy song-oriented structures rather than just using sounds to create the feeling. Obviously there are some influences from classic bands in these songs like Cathedral, Saint Vitus, Reverend Bizarre, The Gates Of Slumber, and of course Black Sabbath.

When I started it, and I do remember quite vividly the situation when I wrote the very first riff, I just wanted to write good songs. Very good songs. It may sound very simple but that’s just it. And it still is. I’m very aware that we did not reinvent the wheel, but that’s totally okay. It’s not my/our goal to innovate a whole genre. The main goal and my personal lifeblood is just to write the best songs we can. To use Wolf Counsel as a vehicle of creative expression. Something that is very dear and important to me in regards to having a good quality life in general.

What is the lyrical content of Ironclad? How do you see the role of lyrics in Wolf Counsel?

Lyrics are very important to me. It was always like that even in my past bands. I’ve been writing lyrics for a long time, so I’m kind of used to it in a way even though I still have trouble finding the right words every now and then. It depends on the form of the day or my mood I guess.

The lyrics are always very personal. The topics derive from past experiences, feelings, and from emotions that are induced by looking at the world. Simple human things mostly. Loss, despair, grief, sorrow, hope, and so on. With Wolf Counsel I always use symbols and metaphors to transport the conclusion of the song/lyric. For example “Shield Wall”. The song title sounds very medieval and battle-oriented, but it’s just an allegory for this natural cover we carry around as human beings, and I mean that in an emotional way. It’s about this protective cover that surrounds us invisibly. So that’s the way I use lyrics, for example. It’s always more than meets the eye, so to say.

You know, the first impression of the band — from its name, some song titles, the overall feeling — is like Wolf Counsel represents some pagan battle concept. How close did I hit with that suggestion?

You hit it kind of close. It’s right that the overall feeling is ancient, medieval, sometimes pagan, etc. These are topics and content I have really liked my whole life. To see beyond what’s in front of our eyes. Beyond the sheer reality of our daily life. History and the past is something in addition that fascinates me… and of course lore about an alternate, parallel world.

The band name Wolf Counsel, for example, is just the meaning of my name Ralf. Ralf derives from RÁÐÚLFR which carries the Norse elements ráð, meaning “counsel”, and úlfr, meaning “wolf”. Besides that, it’s almost a coincidence that my I’m a counselor in my bread labor for  almost 20 years now. So you’re absolutely right in one way, but there’s obviously more to it. With this band, even though it looks so simple and sometimes generic there’s always more to it.

You are already working on the third album — do you see it as a challenge now? Or do you just have a lot of ideas you’re satisfied with and the goal to put it out?

As I mentioned before, I always work on songs and lyrics and riffs, etc. So yes, there are already a couple of songs what will become the next album. The goal is to put out another record approximately next year, we’ll see. It’s not something for which we have a big master plan, it rather comes naturally. There are always a lot of ideas and we just try to pick the best ones to write the best songs we can, as I said earlier. That’s probably the greatest challenge. But then again, with me it’s like the longer you’re doing something, the smoother and easier things come. So we’ll see, but I think we’ll create something for us with which we will be satisfied, I guess by adding some new elements to it and keeping it very heavy and slow again, of course.