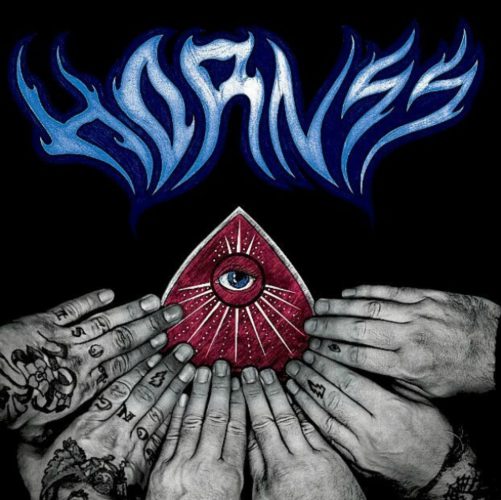 HORNSS come our way from San Francisco, brandishing a new album (their second) named Telepath, which is available now on vinyl from STB Records (though few copies are left) and on CD and digital via Ripple Music on November 18. What we have for you is a piece of music from the album named “Old Ghosts“, and it will kick your ass up between your shoulder blades.

Actually, your ass may wind up somewhere else; individual experience may vary. Mine? Up where I used to scratch my back.

I know — it’s commonplace to say that a song will kick your ass. But about half the time that’s an exaggeration — all you get is an annoying tickle or a dull nudge. But “Old Ghosts” is the real deal.

Before we get to the keister-crushing, here’s a bit of background: HORNNS trace their birth to 2010, with a line-up that now includes drummer Bil Bowman (formerly of Zodiac Killers, blackQueen, and Scrog) along with ex-Solarfeast members Mike Moracha and Nick Nava, who were also founders of the SF punk band The Jack Saints. Their debut album No Blood, No Sympathy appeared in 2013 via RidingEasy Records.

And here’s what Bil Bowman had to say about “Old Ghosts”:

“We’re all old skateboarders. I grew up in the ’80s Florida scene, and lucky enough to be around when Paul Schmitt was selling boards out of the trunk of his car, seeing John Grigley and Monty Nolder around… Grigley’s “What Happens Next?” stencils everywhere in downtown St. Pete. Mike had a half pipe spine ramp in his yard in Palm Springs that Dan from Excel and Eddie Elguera skated. The Nude Bowl was down there too, so he got to watch legends like Salba and Alan Losi. ‘Old Ghosts’ it’s a sonic road rash in drop F tuning about growing up skateboarding in splinters and warped masonite.”

Lest you think you need to be an old (or young) skateboarder to get a rush from this song, perish the thought. And lest you think “Old Ghosts” will just be a dose of fragrant stoner/doom haze, perish that thought, too. Though Hornss do know how to fuzz-bomb your head into a narcotic fizz, this particular song is a crusher, with earth-moving riffs and spleen-rupturing bass and drum tectonics. The wailing vocals also have a cutting edge on them that puts a knife under your throat. And the thick, ropy lead guitar melody and weird Dopplering sonic accents are redolent of plummeting catastrophe. It’s also a  damned catchy song. You’ll see.

Telepath was recorded directly to analog tape at Green’s Louder Studios in Grass Valley, California, by Tim Green (Saviours, Melvins, KARP, etc.). It will be released on CD and Digital by Ripple Music on November 18th, and it’s available now on vinyl now through STB Records. Pre-order links are below — and we’re also including a stream of a previously released Hornss track (“Atrophic”) from a recent STB Records sampler right after our premiere of “Old Ghosts”.