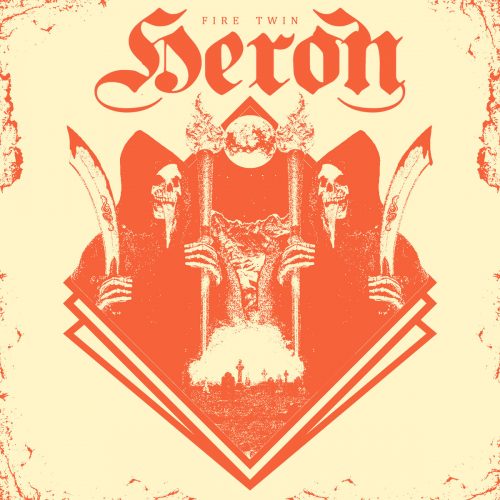 After a self-titled debut EP released in 2015, Vancouver, B.C.’s Heron now return with a new one named Fire Twin. It’s being released today — in fact, it has just today become available for streaming and download on Bandcamp, and you’ll find it down below as well, since we’ve eagerly agreed to help spread it around.

It’s well worth your time, especially if you have a taste for bleak, blasted sludge/doom that’s heavy enough to split concrete and powerfully atmospheric enough to cast a deep and dark spell. 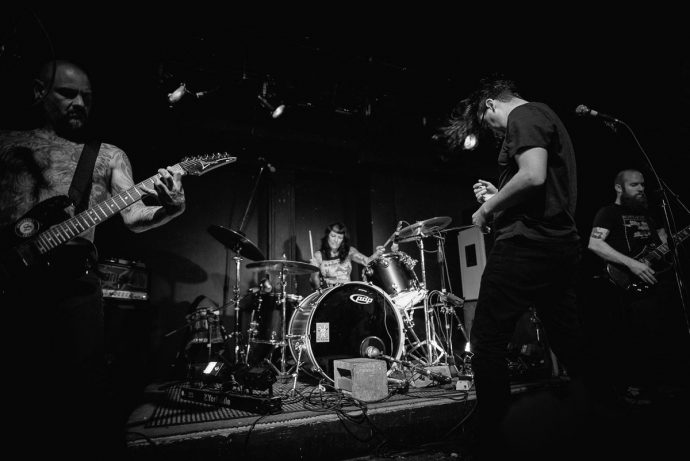 There’s no question that Heron are highly skilled at the dark art of smashing their listeners so far into the ground that rats could nest in your hair without having to climb very far. The vibrating riffs and earthmoving bass lines in these three songs hit with crushing weight and immense destructive force, and Heron deploy them in huge, staggering hammer blows, accompanied by the boom and crack of drums that themselves have the physical potency of mortar fire. It may be possible to keep your head still while the band bend their will to these mid-paced demolition jobs, but only if you’ve already suffered some kind of traumatic paralysis.

But there’s more going on here than an almost physically palpable bludgeoning, as impressive as that is. Heron also display a talent for infiltrating the three tracks with melodic undertows that are as mesmerizing — and as emotionally devastated — as the bone-breaking power of the rhythms. There are moments at the beginning and end of “The Great Attractor” when glimmers of light shine through the mounting rubble and choking smoke left in the path of these juggernauts, but those moments are the exceptions. Yet as astoundingly desolate as the atmosphere of the music is, it’s equally transfixing.

The scraped-raw howls and skin-splitting shrieks of the band’s vocalists spin the soul-collapsing aura of the music even further out into the dead zone, but even the harrowing wretchedness of those expressions doesn’t shake the spell. You can sink deep into this pit of doom filled with cold tears and still not want to surface.

In short, Fire Twin is a very potent piece of black art, and a great new discovery, which we are very happy to share with you below.

Fire Twin was recorded by Kevin Grindon of Grind City Recordings at Rain City and was mastered by Brad Boatright at Audiosiege. The artwork was created by Cryptworm. Get it here:

One Response to “AN NCS EP PREMIERE (AND A REVIEW): HERON — “FIRE TWIN””