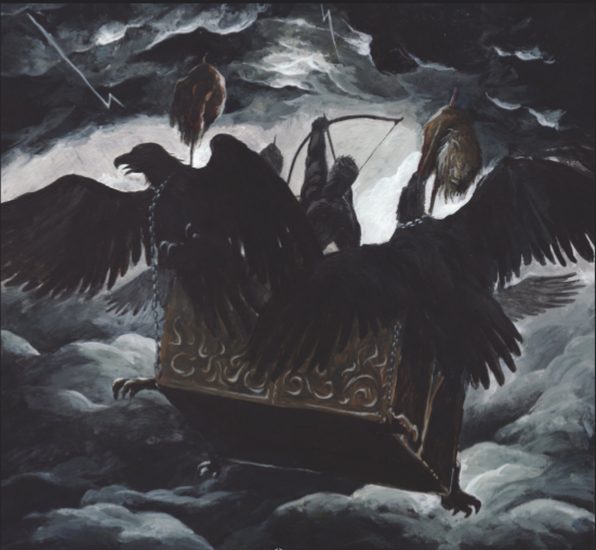 As I rapidly reported a few hours ago after receiving a Bandcamp alert, Deathspell Omega jumped the gun on their previously announced November 8 release date for their new album and uncaged The Synarchy of Molten Bones on Samhein night, to the surprise and glee of hordes of costumed and un-costumed fans.

Everyone can listen to it now; vast numbers undoubtedly already have. There is probably no need for myself or anyone else to review it. But I’m sharing some thoughts anyway, because I’ve so eagerly anticipated its release and am now near-bursting with thoughts. Better to get them out than risk an aneurism. Plus, I thought some of you might want to share your own reactions in the Comments.

Upon finishing a first listen (and my only listen as I write this), I was — to quote the title of the second song — famished for breath. Every track is so breathtakingly energetic and so flooded with mind-bending intricacy that hearing them straight through risks completely overloading the capacity of the normal human brain to keep pace, or to manage even a modicum of comprehension. I thought my brain had been unceremoniously teleported into the clutches of a centrifuge that had developed a mind of its own — and then immediately lost its mind.

That summation may be a slight exaggeration — it’s not a completely unceremonious plunge into a head-whipping spin: The album does begin (and end) with a spectral fanfare of symphonic horns. But otherwise, you may need a supplemental oxygen supply handy before pressing play. The album knows only two speeds — wildly careening, and flying like a rocket-assisted horde of bats.

It’s an intense, disorienting experience. In recent years, this kind of exuberant, head-spinning intricacy, kaleidoscopic explosiveness, and astonishing technical mastery would have brought to mind the kind of progressive and experimental death metal exemplified by the likes of Gorguts and Dysrhythmia. Here, it’s infiltrated by Deathspell Omega’s trademarked dissonance and a brand of vocal savagery that’s so demonic and deranged as to cloak the chaos in a mutilated mantle of ravenous horror.

Everything about the performances is jaw-dropping. The drumming is an ever-changing tour-de-force of light-speed blasting, somersaulting fills, and just enough propulsive hammering to give the helpless listener something to hold onto in these tumultuous storms of sound. The bounding, leaping, cavorting bass notes often seem to be off on a tangent of their own, and take center stage at just the right moments during subsidences in the drummer’s fireworks.

There’s a lot of high-speed riff tornados and related fret torture in play as well, veering and swarming so quickly and unpredictably that it seems there’s a kaleidoscope inside that crazed centrifuge along with your brain. Eerie, dissonant notes and warped chords come and go, along with a scattering of meandering arpeggios that don’t really slow things down — because as they sinuously twist like wraithlike serpents, the drummer usually picks those moments to pull out all the stops.

The combined effect of all this is electrifying. And I’m afraid that it is also like an addictive drug that somehow sharpens the senses just as it unmoors them from reality — I already feel a yearning to return to the music. And maybe once I collect myself enough to do so, I’ll comprehend something more of what just happened. Or not….

But either way, this album will be unforgettable.