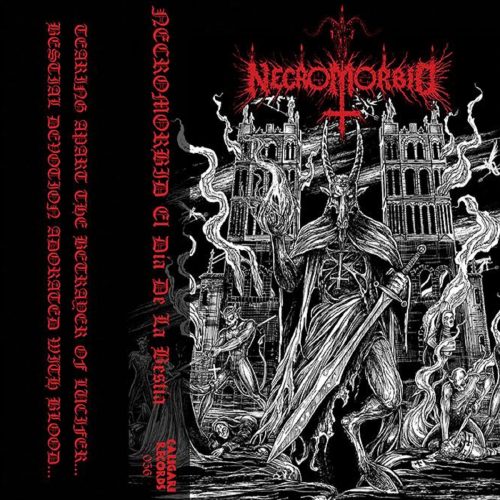 Draped in chains and with grim and murderous countenances, Necromorbid have mounted their warfare against Christ and Christianity from Italy’s ancient and beautiful land. Embracing the lineages of Archgoat, Black Witchery, Morbosidad, and other allied goat-horned purveyors of satanic black/death ferocity, Necromorbid have recorded a debut album fittingly named El Dia De La Bestia, and Caligari Records has sealed it within pro tape for release on November 6. At the end of this post, you will find a player that streams all 10 of its tracks.

The songs on the album are mainly compact, with relatively simple structures and a dedication to a campaign of relentless attacking savagery. A trip through the album is like jumping on a live power line, an experience that also spawns visions of gale-driven wildfires and black cyclones dropping from the skies everywhere you look. 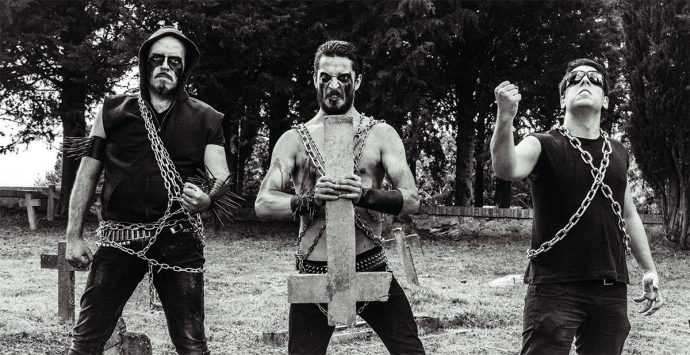 The music has been given a relatively crisp production, in contrast to the murkiness of much vicious black/death metal, but there’s still a filthy layer of distortion on the guitars that suits the music’s grim, dismal melodies, which course through the songs like tainted blood in a demon’s surging veins.

While ferocious speed dominates throughout, the songs do benefit from variations in the pace and in the rhythms. The band segment the ravenous slaughtering, sometimes with evil, lurching stomps and more often by following the drummer into synchronized pneumatic hammering that departs from his usual blasting, There’s some punk-fueled romping scattered here and there as well — in addition to manic crescendos of berserk cacophony.

The vocals are a tandem of high, bloodthirsty shrieks and deeper, hoarse roars and howls that together seem to borrow from hardcore, black, and death metal in a way that adds fuel to the fiery hatred that animates the album.

The player below organizes the music as it exists on cassette tape, divided by side rather than by track. So, here’s the track list: