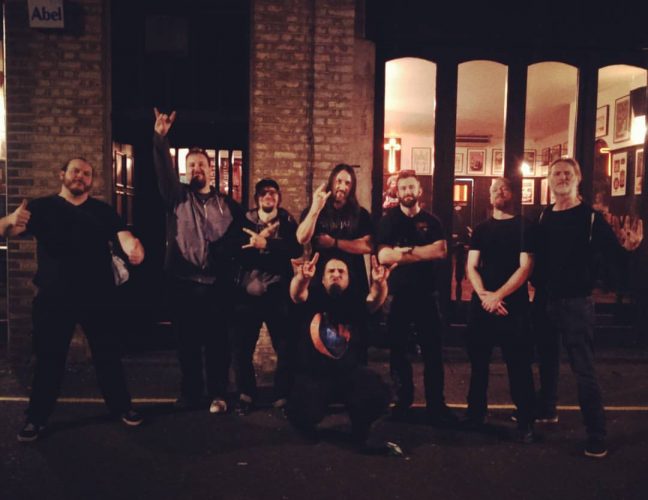 (Andy Synn reviews the performances of Mithras and Rannoch in London on October 31, 2016, and includes some of the videos he made.)

One of my favourite things about being in a band (though, to be fair, there are lots of things I love about it) is the chance it affords me to play shows with bands that I love. Over the years I’ve been lucky enough to go out on tour with bands like The Monolith Deathcult and Becoming The Archetype, and perform alongside such stupendous acts as Darkane, Abigail Williams, and Skeletonwitch (to name but a few).

And the thing is, although I still have a hefty list of bands I’d love to support or go on tour with (Living Sacrifice, Blood Red Throne, A Hill To Die Upon, Sanzu, Extol, some Swedish group called Meshuggah…), I’m happy to report that I recently got to tick off another big milestone when we opened for the mighty, mighty bosst… Mithras!

Now, don’t worry, I’m not going to be as egotistical as to review my own band’s performance. I think we played well, played tight, and it generally just felt really good to be back onstage in front of an appreciative audience.

I will however furnish you with 3 factoids from our performance which you might find interesting:

The evening’s second act was our old friends in Rannoch, a name which our regular readers should definitely recognise by now. For those unfamiliar with the band, I find it simplest to describe their sound as an impressively organic mix of the very best elements of classic Opeth and Strapping Young Lad, making full use of the extended range of their guitars to concoct some stunningly proggy, punishingly metallic music of a very distinctive style and flavour..

Concerns that the band might have lost their mojo following frontman Ian’s shocking decision to shear off his flowing locks were quickly put to rest with a rendition of an all-new track, provisionally titled “Darkness, Pt. 1”, that continues to showcase the band’s mastery of progressive dynamics and crushing, pneumatic riffage.

In an undeniably ballsy move the band then announced that their second song… would also be their last… before swiftly diving into a full run-through of the three-part title-track to their debut album, Between Two Worlds, something which amounts to just under 28 minutes of solid prig-metal ingenuity. It was an audacious gamble, but the quartet pulled it off with aplomb.

Of course the majority of fans (myself included) were here to see the resurgent Mithras returning to the stage after far too long in the wilderness. And what a return it was!

Before the show, drummer Julien Helwin had told me to expect a fair few blastbeats, and boy howdy, was he not exaggerating, because that man can blast with the best of them. Of course, on record the drums are all provided by band linchpin Leon Macey, so he’s really the one to blame for some of the ridiculous speeds and physical demands that drumming for Mithras requires. And thankfully Julien was more than up to the task!

Both Tom Hyde (guitars) and Vic Lochab (bass) put on a fine performance as well, laying down a thrilling mix of chunky, churning riffs and thick, clanging grooves, as if they’d been a part of the band from the start, adding extra weight and heft to tracks both old (“Trample Their Works”, “Lords and Masters”) and new (“When The Stars Align”, “Odyssey’s End”).

It wouldn’t be out of line though to say that most eyes were firmly fixed on Macey for the duration of the band’s set, as the multi-instrumentalist (emphasis on ‘mentalist’) Mithras mainman is now handling not only the lion’s share of the lead guitar work, but also the vocals, and I’m sure that many people were curious as to how he’d balance playing the band’s signature techtastic guitar work while also manning the microphone.

And, it has to be said… he does a fantastic job. While extremely humble and self-effacing between tracks, Macey’s delivery of lines like “I’m fixed upon my path / To search a ruined world / For any who like me / Endured the scourging of mankind” (“Under the Three Spheres”) and “When young we played / Between the stars / We Never knew / Time was set against us” (“Time Never Lasts”) is just as powerful and authoritative as his predecessor and, if you didn’t know any better, you’d be hard pressed to tell that this particular incarnation of the band wasn’t one which had been playing together for years.

I’m happy to say it really was a hell of a show (as the videos below should attest), and I would happily have stuck around to hear the band play even longer. Unfortunately all good sets have to come to an end at some point… so I suppose it’s lucky that I’ll get a chance to see the band again on Saturday at Damnation Festival!