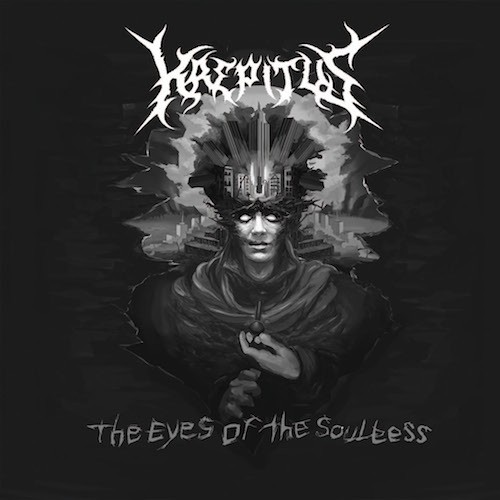 On November 25 a quartet from Calgary, Canada, named Krepitus will release their debut album, The Eyes of the Soulless. Two exhilarating singles from the album have appeared so far, and today it’s our pleasure to bring you the premiere of a third: “Desolate Isolation“.

When I first heard this song, in the space of a little more than five-and-a-half minutes I went from, “Not bad,” in the opening moments to, “HOLY SHIT!,” by the close of the track’s brain-frying finale. Actually, I mentally exclaimed “HOLY SHIT!” a lot earlier than that. 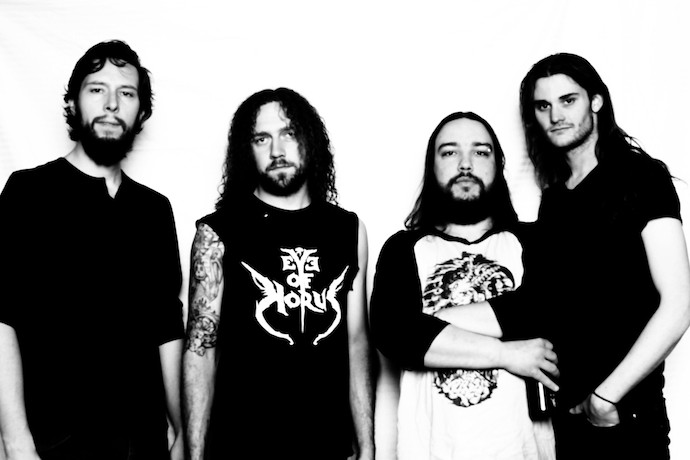 Much of my rapidly increasing excitement was (and still is) attributable to the multiple eye-popping guitar solos in the song, but it stands out for other reasons as well.

“Desolate Isolation” punches all sorts of death metal buttons in a very well-written and superbly executed roller-coaster thrill-ride. Produced in a way that gives the music a crushing, electrifying sound, the song leaps forward initially as an up-tempo, thrash-infused romp that both hits with bone-splintering force and exhibits impressive technical fireworks, with raw, abrasive howls adding to the song’s energy.

But that thrashing pace isn’t non-stop. In fact, what happens at the 1:45 point is a stand-out moment in a song filled with memorable events. The pace drops unexpectedly into a dismal yet epic crawl, paving the way for a slow, sinuous guitar solo that begins to spiral and swirl upward like a shining wraith from a tomb and eventually bursts into spectral flame.

And what follows burns hot and fast, too, with an adrenalizing rush of blazing drum and bass work and head-whipping dual-guitar acrobatics, with the band ultimately reprising the opening passage, but this time electrified by the heat lightening of another whiz-bang guitar solo. The song builds to a blood-pumping crescendo, drums booming and strings superheating.

As icing on this cake, Krepitus also display a talent for crafting melodies that can get stuck in the listener’s head. I can tell you, having gone back to this song a lot since first hearing it, it doesn’t wear out its welcome. Even when you know what’s coming, it’s still an electrifying trip.

“This song shows our attempt to blend the technical elements popular today with tech death matched with a melodic design closer to that of classical baroque. By far our most challenging track it also has become one of best received tracks live.”

In addition to our stream of the new song, below you will also find a stream of the title track (which is available for free download here) as well as album opener “The Decree of Theodoseus”, which premiered at The Sludgelord.

To pre-order the album at Bandcamp, go here: