There is some risk that when you look at this band’s name, their album art, and even some of their song titles, you’ll get the wrong idea about their music. My first thought was, “throwback speed metal, or maybe filthy black thrash”. That was wrong — very wrong — and the surprise turned out to be a big and stunning one.

The album’s name is Worms, and it’s the second full-length by the Spanish band Barbarian Swords. It will be released on November 11 by Cimmerian Shade Recordings and Satanath Records. We have for you a full-stream of the album in the player below. 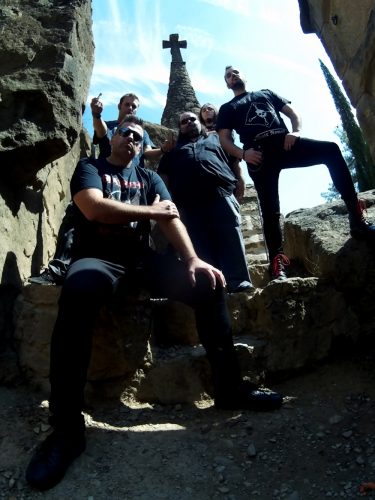 To repeat, this probably won’t be what you’re expecting, unless (unlike me) you have some previous familiarity with the band’s music. In its predominant forms, Barbarian Swords traffic in a twisted but very compelling hybrid of doom and black metal — nihilistic and barbaric, moldering and mesmerizing, and frequently unnerving. And there are massive headbang triggers lurking like land mines in the album, too.

On the doom side of things, you have an array of grim, grief-stricken magisterial processionals with uneasy, unearthly, haunting melodies, as well as long, slow despairing crawls with titanic, moaning and groaning riffs and equally massive drum blows, which cast a choking sonic pall of doom and desolation. The parts of the songs that are devoted to these frigid earth-shakers become atmospherically oppressive, suffused with the scent of thick, oily smoke drifting up from a cooling funeral pyre.

In these turgid passages, the music also becomes frighteningly intense as well as unerringly bleak and crushing. For one thing, the vocals throughout the album (which are one of the main connections to black metal) are utterly maniacal — an array of goblin snarls dripping with bile, poison, blood, and infection, and high, unhinged shrieks that sound like a panther being tortured. There’s so much demonic fire in this voice that it’s genuinely frightening.

But the intensity of even the doom-sodden stretches of the album is also fueled by the truly amazing lead guitar work and soloing. The songs include trilling melodies that impart a feeling of terrible despair, yet they become mesmerizing. On the other hand, especially in the massive penultimate track “Requiem”, which clocks in at 18 minutes and includes a long guitar jam, the soloing becomes the sonic embodiment of derangement — the devolution of a human mind into a gibbering madness, in the throes of a terrifying hallucination.

The black metal elements of the album also include explosions of swarming melody and bullet-spitting blasts, which send the energy boiling into the red zone. And then there are those serious headbang triggers — and some highly infectious riffs that bring to mind Motörhead and Judas Priest.

This album is very, very, very good. The label recommends if for fans of Celtic Frost, Triptykon, Hooded Menace, Xasthur, Swampcult, Cianide, and Bolt Thrower. I wouldn’t nit-pick that list, because it’s a pretty accurate and useful list of references.

The cover and layout were designed by César Valladares (Krisiun, Asphyx, Grave Miasma, Under the Church, Balmog, Graveyard…).

Look for the album on November 11 and check these links for further info and ordering options (a double-vinyl version of the alum is projected for release in January 2017):