2016 marks Enslaved’s 25th anniversary as a band, and 22 years since they released their first album, Vikingligr Veldi, which is the subject of today’s post.

Originally released on the now-defunct Deathlike Silence Productions (which was founded by original, and now deceased, Mayhem vocalist Øystein Aarseth, a.k.a. Euronymous, to whom the album is also dedicated), Vikingligr Veldi has recently been given a fresh coat of paint and a spiffy new remaster for its long-awaited release on vinyl.

And although the original version still sounds pretty damn good for its age (yes, it’s a little buzzy in places, and occasionally the keys can get a little overbearing, but there’s a pleasing amount of clarity and depth to the overall sound, and each instrument, including the oft-neglected bass guitar, is given a good amount of room and space to breathe), the remaster just gives the album that extra bit of polish and shine, without detracting from the raw energy or rough and ready sensibilities of the album as a whole. 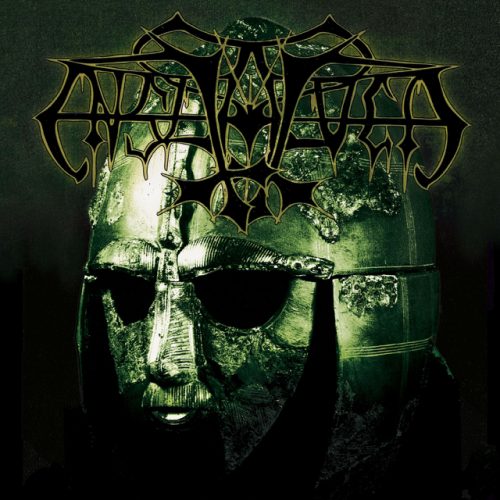 Vikingligr Veldi is, arguably at least, in many ways Enslaved at their most stereotypically Black Metal, which is in no way meant as a criticism. But even here the band (at the time consisting only of Grutle Kjellson and Ivar Bjørnson from today’s line-up, with drums provided by a certain Trym Torson) didn’t exactly stick to the orthodox standards of the still nascent genre.

Yes, it features an absolute fuck-ton of shivering tremolo riffs, pulsing blastbeats, and howling vocals (“Heimdallr”, the shortest and most savage track on here, in particular is probably one of the most trve-kvlt songs in the band’s entire catalogue), and the keyboards are much more primitive than the nuanced swathes of atmosphere and ambience which Herbrand Larsen would eventually add to the band ten years later, but so much of the band’s approach on this album finds them already hinting at the much more progressive direction they would go on to take.

For one thing the song lengths – four of the five tracks clocking in at approximately eleven minutes long – were indicative of a band not only willing to take a few risks and indulge in some more ambitious and extravagant compositions than their more punk-inclined peers, but also of a band who put a real value on musicianship and storytelling.

They may be a little rough around the edges in parts, but there’s an endearing sense of fearlessness and a devil-may-care attitude towards creativity on display here that speaks volumes about Kjellson’s and Bjørnson’s vision for the band (even if the two of them were only around 15 years old at this point!), nowhere more so than in the audacious decision to end the album with a surprisingly sombre eleven-minute instrumental!

The Norse/Viking themes of the lyrics (performed, oddly enough, primarily in old Icelandic) also helped separate the band further from their more Satanic/anti-Christian peers and, although the band had yet to incorporate the clean/harsh interplay which would become such an important part of their sound in later albums (and which, most recently, has seen all three of Kjellson, Bjørnson, and Larsen stepping up to the plate to provide even greater variety in tone and delivery), the vocals are still delivered with an impressive amount of authority and character.

One of my favourite things about Enslaved as a whole has always been the fact that, despite a career that has now spanned 25 years, 13 albums, and a small handful of EPs, they’re still recognisably the same band in so many ways. They’ve definitely progressed (and become more and more Progressive) since the early days, that’s for certain, but listening again to the remastered version of Vikingligr Veldi I was immediately able to pick out the threads which bind songs like “Vetrarnótt” and “New Dawn” (from Vertebrae) together, and to clearly hear the echoes of “Midgards Eldar” in “One Thousand Years of Rain” (from In Times).

So if you haven’t done so recently now is the perfect time to go back and rediscover where it all began. And, while you’re there, give Hordanes Land a listen too. That EP doesn’t get enough love either.

One Response to “THE REARVIEW MIRROR (ENSLAVED)”