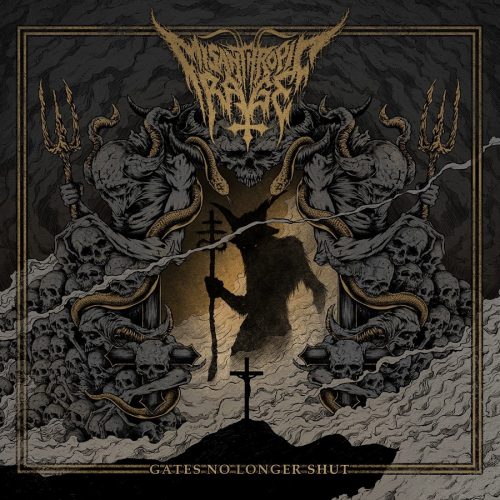 There is nothing wrong with making music that sounds comfortably familiar, as long as it’s done well. In my book, “It’s been done before” isn’t a valid condemnation, standing alone. And let’s face it, trying to break out of well-known and well-loved boxes in ways that don’t leave the artists in a place that resembles a jumbled and ill-conceived mess isn’t easy. Yet having said that, many of us do keep our eyes and ears open for music that’s unexpected, inventive, intriguing, and conceived and executed in a sure-handed way.

Which brings me to Gates No Longer Shut, the new album by the Polish band Misanthropic Rage that we’re helping premiere today. 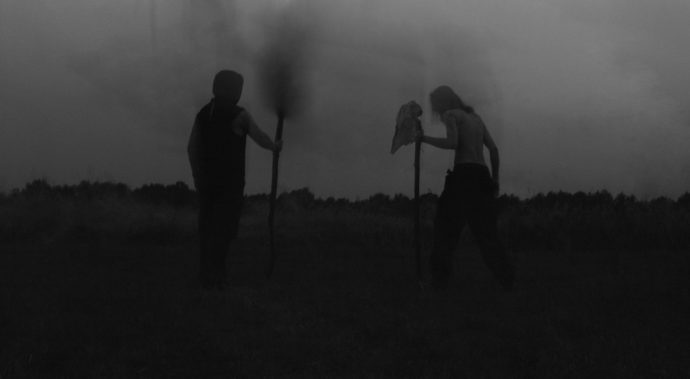 When I briefly reviewed the band’s debut EP Qualia, which itself was also released this year, I mused that, based on the band’s name, people might assume that they would be assailed by an onslaught of raw, bestial black metal. But Qualia was much more ambitious and creative than that, much more unpredictable and even experimental. Gates No Longer Shut exhibits similar qualities, but compared to that eye-opening debut, it is a giant step forward along the twisting and turning trail that Qualia began to blaze.

If you read advance press about the album, you’ll see references to “avant-garde black metal” — which is fair enough, since “avant-garde” has become a phrase people (including me) tend to use when they can’t come up any other short phrase that captures what you hear. I’ll go further and say that for this album it’s a stretch even to claim that black metal is the predominant style.

The music is a very distinctive blending of contrasting sounds, speeds, and moods; it’s dark and disorienting, sometimes depressive, sometimes deranged, but consistently fascinating and head-spinning.

As you make your bewildered way through the album, you can begin to identify recurring ingredients, which collectively give Misanthropic Rage their own musical personality. In my case, I eventually became strongly addicted to them.

The riffs and bass are rough and gritty with distortion, and the drummer periodically fires fusillades of militaristic booms and blasts. When they join forces in bursts of violence, they’re perfectly capable of throwing open the gates to vicious black storms or pavement-splitting demolition jobs.

Intermingled with this ferocity, however, are lead guitar melodies and solos that are quite different. There’s something very weird and paranormal about the guitar tone and the reverberating melodies. At times they made me think of swirling ocean phosphorescence shining in the wake of a rushing destroyer. At other times, they seemed lilting, ephemeral, wistful, and dreamlike. At still others, they resemble the wailing of a phantasm.

In some songs (e.g., “I, The Redeemer” and “Into the Crypt”), these eerie melodies have a pronounced Middle Eastern resonance, exotic and serpentine. In others (e.g., “Niehowdowlany”), the soloing seems like a throwback to ’70s-era psychedelia.

As you also learn, the guitarist is just as likely to deliver bursts of insectile, skittering notes as he is to fire bursts of rapid-fire jabs, just as prone to segue into huge, lurching chords as to execute slithering, swarming manifestations of menace. And the drumming and the bass performance are just as unpredictable and varied. This is a tremendously dynamic album, and there’s not one song that follows a straight path. You look ahead, and you won’t see the horizon.

There’s one other quality in this surprising and intriguing hybrid of styles and sounds that eventually becomes familiar: The vocals are markedly varied and powerful. There are harsh vocals that fall somewhere between a clawing, strangled shriek and a burning yell, along with grated growls, splintering howls, and bile-spewing growls that resemble a violently ill monster vomiting out everything inside it.

But on the other hand, the music includes wailing clean vocals that might put you in mind (as they did me) of Ozzie Osbourne. They mesh very well with the more paranormal and psychedelic aspects of this chamelon-like music. And like everything else going on in the album, they’re very good.

In a nutshell, carve out time and jump into this unusual an unusually accomplished album — it’s well worth it.

Gates No Longer Shut will be released by Godz Ov War this Friday, November 18. Pre-order the album here:

2 Responses to “AN NCS ALBUM PREMIERE (AND A REVIEW): MISANTHROPIC RAGE — “GATES NO LONGER SHUT””