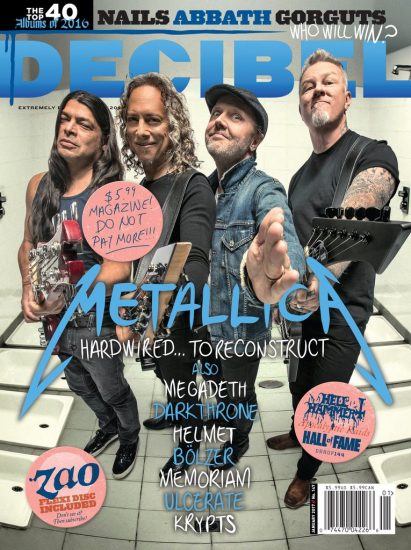 Every year our LISTMANIA series of posts includes not only lists of the year’s best releases as compiled by our staff, invited guests, and our esteemed readers, but also lists assembled by what we call “big platform” web sites and selected print magazines. And every year, it seems that DECIBEL magazine provides the launch for LISTMANIA by coming out with the first of the lists we see from that category of web sites and print zines — and they’ve done it again this year.

I’m a long-time DECIBEL subscriber, but my hard copy of the January edition, which includes the YE list, hasn’t hit my mailbox yet. However, today DECIBEL provided an on-line teaser for the issue that included their ranking of the year’s Top 40 albums.

For the first time in 7 years, I can re-publish their list without stealing their thunder (and I actually feel better about that). Apparently, someone else besides me jumped the gun this year, and DECIBEL decided to just go ahead and post the list themselves. 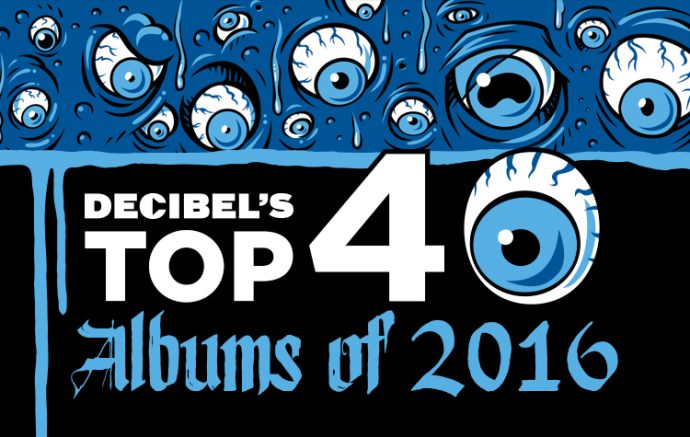 But before getting to that, I’ll share again the thoughts that I share every year at this time about the phenomenon of year-end lists in metal.

They continue to serve several useful purposes. One, of course, is to introduce fans to albums they may have overlooked. I also know people who don’t buy much music during the year and actually wait to read year-end rankings before preparing their shopping lists. And, perhaps most obviously, they give us something to discuss and argue about. Because, duh, we don’t have enough to argue about already.

I usually try to hold my own comments to a minimum when I post these year-end lists, mainly because I can’t manage to make a list of my own. But here are a few observations about this one, just to et the conversation started, which I must preface by saying that I managed to miss listening to an unusually high number of albums that are on the DECIBEL list this year.

First, I’m delighted to see the new album by our friends in Khemmis ranked so highly. It’s an excellent album, and of course it’s always refreshing to see nice guys finish first — because how often does that happen?

Second, although I’m not surprised to see Blood Incantation’s new one in the Top 5, and although it will likely be ranked highly in many other lists like this one, given the amount of buzz it received this year, I’m now convinced the recognition is well-deserved. I was made a true believer by seeing their live performance at California Deathfest this fall.

Third, I’m again disappointed, as I was last year, that the list is so light on black metal, with only Abbath and Deströyer 666 in the Top 20 and very few in the second 20 (yes, I do see Oranssi Pazuzu up there at No. 4, but I’m not sure a genre definition has yet been invented for what they’re doing). And although I think both of those albums are very good, I wouldn’t have picked them as the two best black metal albums of the year.

Fourth, as often seems to be the case, there are more of my favorites at the bottom end of the list than at the top, with the likes of Inverloch, Inquisition, Cult of Luna + Julie Christmas, Chthe’ilist, and Phobocosm all lurking in the bottom third. Still, I’m glad they’re on the list somewhere.

There are other albums on the list that I enjoyed a lot, but perhaps more than in most years, this list is missing a big percentage of my favorites, and conversely it includes a larger than usual number of albums I never heard all the way through, in part because what I did hear failed to really grab me. Maybe I should have dived deeper. Maybe I will.

And finally, I’ll say it before you do: The DECIBEL list is necessarily missing a big chunk of contenders whose albums weren’t even released before press time on the January issue, which was probably at least 30 days ago. That’s not a criticism, but rather the result of the lead time that print publications must live with. But this year in particular it leads to the omission of some real gems that have appeared only recently or haven’t yet been released.

Anyway, I’ll stop there and let you guys pick up the conversation below. And to pick up a copy of the DECIBEL issue that includes this list (and of course a lot of other goodies), go HERE.