Martyrdöd are unquestionably a metal band, but the roots of their music is in Swedish hardcore, they’re dedicated to the d-beat, and anything you read about them will likely include the words “crust punk” somewhere in the first paragraph (sometimes with “blackened” or “metallic” stuck on the description). Yet they’ve become so much more than what most people would think of as a crust band. Their new album List, for example, is one of the most epic experiences of 2016.

Yes, I know: If there is an afterlife, I will pay some hellish price for using that overworked word. But dammit, there is no better word that comes close to summing up the experience of List. 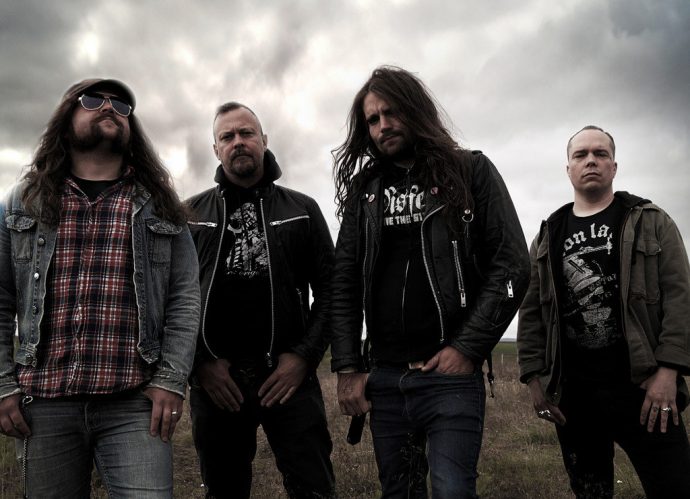 Of course, other words do come to mind, many of them connected to fire and blood — words like “incinerating”, “scorching”, and “inflamed”, words like “bruising”, “pulse-pounding”, and “heart-swelling” — and that connection exists because the fire in this album is the kind that burns in the heart when passion ignites the blood. That’s what heats this album, and the passion in the music is highly contagious. (As you can tell, it sure as hell has infected me.)

It’s not difficult to break down and identify the main component parts of these songs; they’re branded into your head before you even reach the album’s half-way point, because the songs are more alike than they are different (though that makes them no less riveting):

The riffs and the bass generate tremendously heavy, abrasive power, hitting like huge storm fronts or crashing waves. The sound is roof-shaking, ravaging, and magisterial, regardless of whether the riffs are heaving, pulsing, hammering, or blasting at high speed. They create a sense of surging, dark intensity and drama.

The drumming? It’s about 90% devoted to hard-driving d-beats (I didn’t really count, just a guess). The album is a nearly relentless, rampant gallop from start to finish. Very briefly, including at the beginning of many of the songs, the pace slows to that of a somber processional accompanied by the titanic weight of staggering chords, hinting that Martyrdöd could record a crushing doom album if they turned their minds in that direction.

There is also consistency in the style of the melodies. They have a pronounced folk influence, sometimes mournful but much more often vibrant and warlike. Again there are exceptions, but most of the time the lead guitar melodies are high and penetrating, piercing through the immensity of the surrounding sound or given center stage by brief respites in the galloping and thundering. The interplay between the lead and rhythm guitar is also a thing of beauty, and together they make these (epic!) songs continue ringing in your head after they’re over.

When you get to the title track (which comes up quickly in the running order), that folk influence becomes especially pronounced as the lead guitar begins to sound like the skirl of Celic bagpipes. That happens again in subsequent songs, and in other instances it resembles the fanfare of a war horn leading a charge or (as in “Handlöst fallen ängel”) like a frenzied fiddle ( unless that really is a fiddle in the song). And in the brief but beguiling instrumental interlude “Drömtid”, which resembles something medieval in its origins, the metal is stripped away entirely, and nothing but folk music remains.

There are also guitar solos scattered like fireworks across these tracks that give the listener’s already surging adrenaline levels an extra boost — white-hot fret-burners that you can imagine ringing across a big arena packed with howling humanity. The style of these solos isn’t something you find in your average crust punk or hardcore record, but there’s really nothing else about List that’s average either.

And the final fundamental ingredient, which pushes this already intense music into the red zone, are the vocals. They’re raw, flesh-stripping, feral, and utterly barbaric explosions of ferocity. I guess they’re what gives rise to the addition of the word “blackened” that sometimes appears in descriptions of the band’s music. 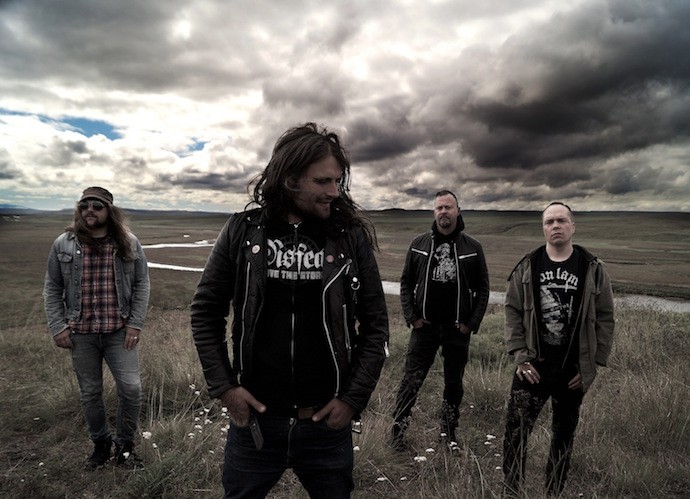 Martyrdöd combine all of these recurring components to create music of tremendous power and even grandeur. I’ve used the term “warlike” before, and that’s the kind of intensity that courses through the songs — but not the atmosphere of cold, modern, mechanized warfare. The atmosphere here is something much older, something that inspires visions of  mythic battle charges on horseback under a big, heavy sky across an open plain soaked with blood.

And yet the rough, raw, primal, politically charged energy of crust and hardcore is in the music, too, rising perhaps most fully to the surface in the album’s final track “Transmission”, but always there.

It’s an unusual combination, but one with great appeal. It makes List one of my personal favorites in a very strong year for metal. And the combination also makes sense if you think about it. We have our own battles to fight in the here and now, just as our ancestors did; humanity can be relied upon to continually churn out noxious ideas and oppressive people that must be opposed. These songs are battle hymns for our own time, which harken back to an earlier age.

And so, to sum up:  There is only one Martyrdöd, and List may be their crowning achievement.

List will be released on November 25 by Southern Lord (CD, LP, digital).