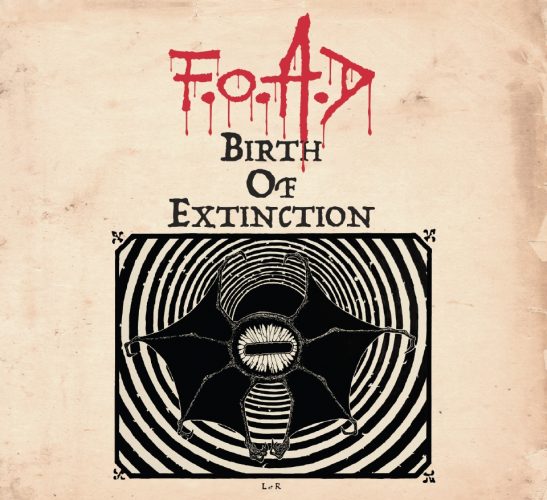 I’ll spell it out for you: Fuck Off and Die. I’m not talking about you, of course. But Sweden’s F.O.A.D might be. Their debut album Birth of Extinction is being released today by Mythrone Promotion and Defense Records, and we have a full stream of the album for your ears. It takes no prisoners.

Birth of Extinction may be the band’s full-length debut, but F.O.A.D (who are based in Västerås) are not newcomers. They trace their roots to a formation in 1986, although an extended hiatus followed their birth before their first demo Demo-Nical appeared in 2014. Birth of Extinction includes that demo as well as an even earlier song, “Morbid Truth”, in addition to the seven most recent album tracks. 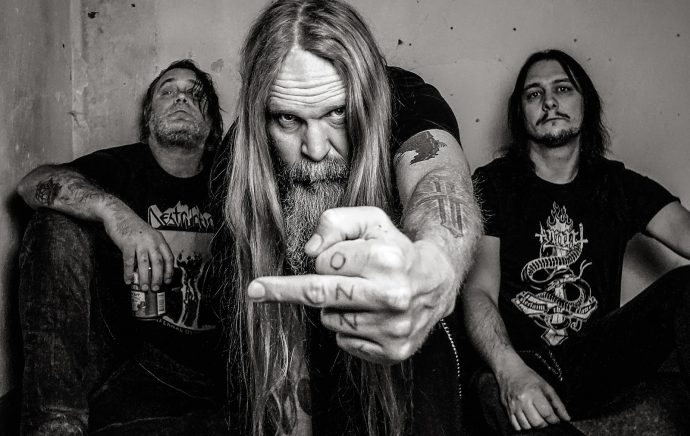 Birth of Extinction reveals the influence of certain thrash bands from the early ’80s and ’90s — groups like Hexenhaus, Sodom, Merciless, and early Voivod — but one reason the album is so good is that F.O.A.D aren’t just trying to ape their forebears.

You’ll find out soon enough that this isn’t tinny-sounding party thrash. F.O.A.D’s music is as vicious as a pack of famished wolverines who’ve been caged too long, or maybe more like a pack of wolves who’ve just succeeded in running their prey to ground.

The music hits with deep, visceral power, the riffs cutting like bone saws and the rhythm section punching like a heavyweight. F.O.A.D do gallop — like some steel-armored war horse that’s twice as big as a normal equine beast — but they also deploy an arsenal of savage tremolo riffs that amplify the sense of pure evil that radiates from the speakers. And the riffs also sound radioactive as hell, toxic enough to boil flesh from bone.

The vocals also underscore F.O.A.D’s merciless intent, with raw, abrasive, carnivorous howls coming for your throat most of the time. But as you’ll first discover on the third track “Legion of the Dead” (which kicks the speed of the music into high gear), F.O.A.D’s vocalist also has a very good clean singing voice.

One reason this album is so damned good is that F.O.A.D don’t deliver a batch of musical clones. There’s a lot of variety among the songs. That speed-metal rampager “Legion of the Dead”, for example, is immediately followed by a slower, doomier, thoroughly morbid track called “Doomed Rebirth of Christ” — though it also includes bursts of frenzied, threshing riffs as well as an extended guitar solo that has a lot more character than your typical thrash fret-burners.

The twists and turns don’t stop there. For example, “Deathcamp VIII” lays on dissonant, brain-fragmenting leads and deranged bass work; there are guitar parts in “Bastard Son” that sound like a brass section; and “Holiday In Armenia” is a massive headbang trigger.

The three tracks from the 2014 demo that are included on the album are also hot as hell. Two of them are demo versions of songs that eventually became album tracks, while “Among the Living Carcass” is just a flat-out explosion of feral, fireball insanity. And the album closer — that 2012 single, “Morbid Truth” — is a killer as well, and early evidence that F.O.A.D had the capacity to change things up to good effect, even within a single song.

In a nutshell, Birth of Extinction is yet another welcome late-year surprise, a collection of well-written, well-performed songs that clearly are the handiwork of experienced musicians who have taken a few decades’ worth of musical interests and integrated them into an iron core of thrash. It may be trite to say it, but it’s damned true here: all killer, no filler, from beginning to end.

As noted, Birth of Extinction will be released today on digipack CD by Mythrone Promotion and Defense Records. You can order the album via either of these links:

The track list is below, followed by our album stream. Follow F.O.A.D on the web at these locations:

08. Among the Living Carcass
09. Bastard Son
10. Doomed Rebirth of Christ