For this Sunday’s backward look over our shoulders at metal from yesteryear I’ve picked two songs from a striking album released by Necromantia in 1995.

Necromantia is a hallowed name not just in the circles of Greek black metal but in the global covens of black metal fanatics as well. The band originally came together in the late ’80s, releasing their first demo in 1990 and a debut album called Crossing the Fiery Path in 1993. Their last full-length was 2007’s The Sound of Lucifer Storming Heaven, but their only new music since then (as far as I can tell) are the two tracks they contributed to their split with Acherontas in 2008.

The two songs you can stream below are the opening tracks to Necromantia’s second album — and probably their best — Scarlet Evil Witching Black. It was originally released by Osmose Productions in 1995, and then Osmose reissued it on CD and gatefold vinyl in 2014, and it’s also now available through the Osmose Bandcamp. 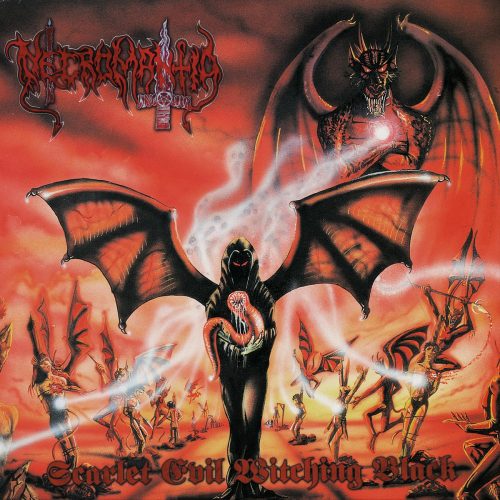 The line-up for Scarlet Evil Witching Black includes the formidable Magus Wampyr Daoloth (Thou Art Lord, Principality of Hell) as the vocalist. He was also one of the band’s two bassists on the album, the other being his band co-founder, 8-string bassist Baron Blood. Although the use of the 8-string bass instead of a rhythm guitar has been a distinctive feature of Necromantia’s music, the album does include guitar leads and solos performed by Divad, as well as keyboards and piano by Inferno, and percussion (plus saxophone) by Giannis Papagiannis (aka “The Worshiper of Pan”).

Scarlet Evil Witching Black is a landmark album, justifiably praised and revered to this day. Numerous reviews can be found, and I’m not going to add my own here, but I will leave a link to this one by the inimitable autothrall (From the Dust Returned), and quote this excerpt from his review, which includes comments about the two songs that I’m embedding below (because they happen to be the two available for streaming on the Osmose Bandcamp page for the album):

“Scarlet Evil Witching Black is the crowning moment for a band who receives far too little credit, and it’s arguably the crowning achievement of the Greek scene. The 8-string bass is not the band’s only forte, as pianos and saxophones also exist in this negative plane, and a subtle and beautiful orchestration provides a brilliant counterpoint the rugged, raw thrust of the two basses. Magus Wampyr Daoloth has a sinister edge to his vocals, like the frolicking of imps and homonculi about the burning palaces of Hell.

“All the material is enormous and evil. ‘Devilskin‘ enters with distant whipping winds, and the cordial sounds of a music box-like lullaby, before the raging basses erupt like an abandoned palace of heaven crashing into a volcanic, abyssal maw. ‘Black Mirror‘ begins with a doomed gait, glorious sunken memories evoked through the dingy, dual bass.”

Here are links to the Osmose Bandcamp page and Necromantia’s Facebook, followed by the music.

2 Responses to “THE REARVIEW MIRROR (NECROMANTIA)”