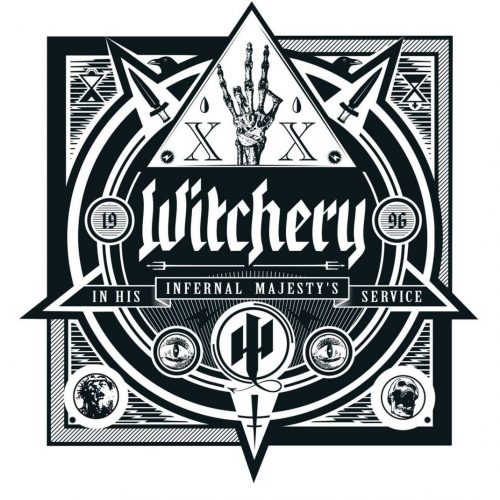 (Here’s Andy Synn’s review of the new album by Sweden’s long-running Witchery, which is out now via Century Media.)

Unless you’ve been living under a rock this year you’ll probably have heard something about the release of a new album by a bunch of head-banging, hard-riffing, Thrash Metal veterans who are currently undergoing a bit of a critical renaissance.

No, not Hetfield and co… we’re talking about motherfucking Witchery, bitches! 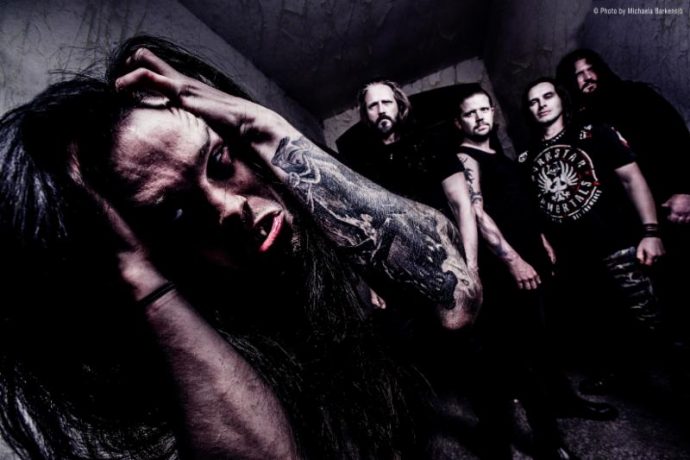 It’s obvious from the first moments of rampaging opener “Lavey-athan” that In His Infernal Majesty’s Service, the band’s sixth album (and their first to feature new vocalist Angus Norder and new drummer Christofer Barkensjö) is all business, no bullshit… and it only takes a cursory listen to the skeletal strut of “Zoroaster” or the scorched-earth Slayerisms of “Netherworld Emperor” to reinforce this opinion, as the terrible tag-team of Rimfält and Jensen crank out massive riff after massive, sharp-toothed Black/Thrash riff with merciless, malevolent precision, putting in some of the best work of their careers in the process.

Even when the band get a little more grim and groovesome – as they do during the macabrely melodic “Escape from Dunwich Valley” and the pulse-pounding “Feed the Gun” – they never bring anything but their A-game to the table, D’Angelo and Barkensjö locking down the low-end with extreme prejudice, while the always impressive Rimfält/Jensen partnership lets rip with some serious serial-killer swagger.

Stepping in to replace the dearly-departed (though not dead, let me stress that) Emperor Magus Caligula – who himself stepped in to replace ex-Marduk man Legion, who replaced the band’s original vocalist Tony “Toxine” Kampner – it’s undeniable that Angus Norder has some big, spiky shoes to fill, but the freshly-exhumed frontman acquits himself like an absolute champ throughout the album, spitting forth spiteful hooks and breathing black fire on numbers like the neck-wrecking “Nosferatu” and the blast-fuelled blitzkrieg of “Gilded Fang” like a man possessed (which, let’s be honest, isn’t outside the realms of possibility).

But perhaps the highest accolade I can give to this album is to acknowledge that it just does not fuck around. There’s no faux-progressive pretentions, and no attempt to jump on the latest bandwagon, just eleven sadistically infectious songs (thirteen if you count the bonus tracks, a pair of leftovers from the Witchkrieg sessions which are easily as good as anything from the main album, particularly the rapacious “Cloak and Dagger”) of pitch-black Thrash Metal goodness.

Shout it from the highest rooftops… witching is their business, and business is good!

2 Responses to “WITCHERY: “IN HIS INFERNAL MAJESTY’S SERVICE””