On the 2nd day of December, Dark Essence Records will release the new fourth album, Anti-Cosmic Art, by the veteran group of Norwegian black metal barbarians known as Sarkom. Produced in a way that gives it the sonic power of a megaton detonation, it’s a compact, varied, and consistently addictive blast of fire and ice that will keep your head in a hammer lock from start to finish. You’ll see — because we’ve got a full stream of the album for you today.

At seven songs and 30 minutes, the album doesn’t overstay its welcome, but instead leaves the listener wanting more. The first time through it is like unwrapping one thorny, charred gift after another, each song a nasty surprise, and each track so well-written and so capably performed that it sticks in the head like a spike. 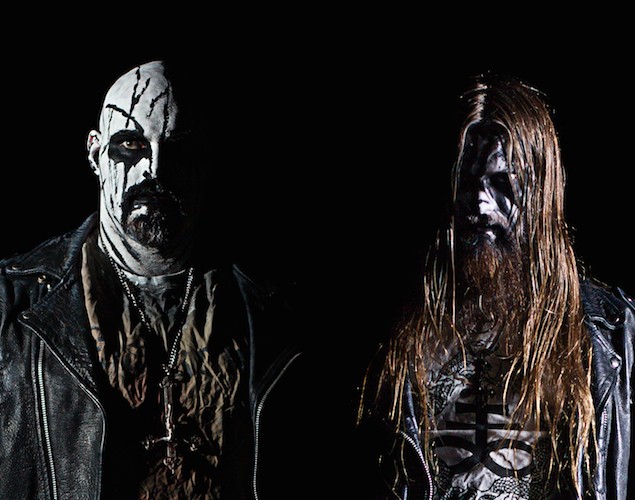 I’ve written before about the electrifying album opener “Previous associates, now as targets for the gun”, which burns with a bleak, black fire, raging from start to finish. Yet it’s also a dynamic thrill ride. The grim, ravaging riffs  feast upon the ears in a feeding frenzy, but the drum rhythms move from blast-beat strafing runs to punk-influenced romps to martial beats and rapid-fire hammering, while the melodies are both searing and ominously chilling.

The opener is also an introduction to the explosive power of the overall production. The music is bursting with barbarous energy and jolting dynamism — from the gut-busting drumwork to the big, vibrant bass rumble, to the slash-and-burn explosiveness of the guitars, to the wild, feral, shrieking violence of the vocals.

“Mind-abscess” is dark and predatory, both rocking and thundering, with bursts of unnerving dissonance, while “Ruiners of our family tree” is a heavy, brooding mid-paced stomp that features a great psychedelic guitar solo.

The variety in the music doesn’t stop with that opening trio. “Seen through the eyes of a paedophile priest”, as the song title might suggest, is a dark fury of oppressive, swarming tremolo chords and thundering double-bass with eerie, wailing guitar work and disturbing spoken words to go along with scalding howls — and when the pace slows, the music becomes a doomed, dragging crawl full of poison and horror.

“Come, dear cancer” switches things up again, a kind of blackened punk that includes big, jabbing chords, a rocking beat, and guest vocals by Alfahanne‘s frontman Pehr Skjoldhammer that give the song a very different and distinctive personality. That’s followed by “Black metal necrophilia”, which moves between huge, head-hammering chords and a rocking beat and dark, blast-beat-driven explosions of boiling rage.

And there’s one final shifting of gears at the album’s end — a cover of Sodom‘s “Sodomy and Lust” from the 1987 album Persecution Mania, a galloping hellride of black thrash that’s as electrifying as it is vicious.

Peppered throughout the album are an array of eye-popping guitar solos, too, and the overall guitar-driven sound of the music is aided by guest performances from Peter Huss (Shining), Ronni Le Tekrø (TNT, Roquefire), and former Sarkom member Sagstad (Trollfire, Pantheon I).

In a nutshell, Anti-Cosmic Art is a savage adrenaline surge from beginning to end that expertly interlocks many of the touchstones of Norwegian black metal from the earliest days forward. All killer, no filler.

The eye-catching cover art was created by Spectrvm Lvsitani. Anti-Cosmic Art will be released by Dark Essence Records on December 2. It’s available for pre-order (CD and digital), together with related merch, at these locations:

One Response to “AN NCS ALBUM PREMIERE (AND A REVIEW): SARKOM — “ANTI-COSMIC ART””