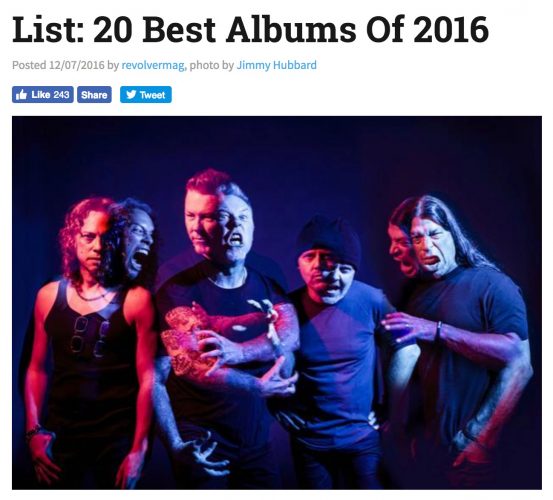 As part of our LISTMANIA 2016 series, we’re re-posting a list of the “20 Best Albums of 2016” published by Revolver magazine yesterday.

Revolver bills itself as “the No. 1 hard-rock and heavy-metal destination in the world”. Their online site boasts 13 million page views over the last year, and the ad rate sheet for the print publication claims a total monthly reach of 300,000 readers.

I assume you’ve already guessed which album Revolver put at the No. 1 position on the list. I suppose it also won’t come as a huge shock to learn that they put Megadeth’s album at No. 2.

I don’t really have much more to say about the list other than to express some surprise that the Tombs album is on here, given the general tenor of the rest of the list, which is pretty much dedicated to crowd-pleasers, and OG crowd-pleasers in particular.

Here’s the Revolver list; to read their commentary about the selections, go here.