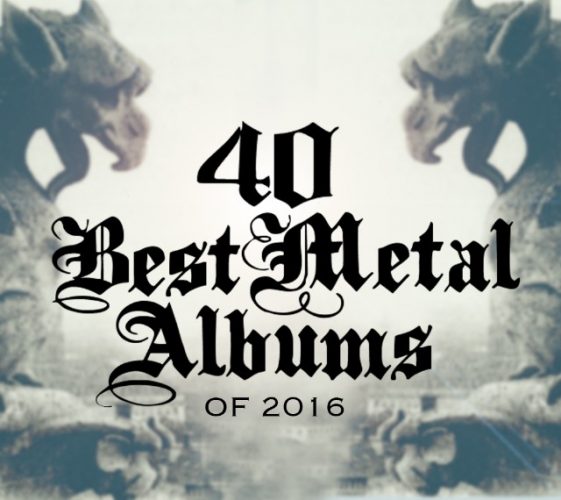 Earlier this month as part of our annual LISTMANIA series I posted the names of the few metal albums that were included in Stereogum‘s list of “The Best 50 Albums of 2016” across all genres of music that Stereogum covers, while noting that their list of best metal was yet to come. Yesterday it arrived.

Stereogum is of course a “big platform” site that appeals to an audience much larger than merely metal lovers, but the site does have a heavyweight group of metal writers in its stable. They’re responsible for the  “The Black Market” column each month, which has been a great source of discovery for extreme music for four years, and Stereogum‘s annual metal list has been dependably solid for just as long. Unlike metal lists at other big cross-genre sites, Stereogum’s hasn’t had the aroma of pandering and calculation hanging about it like a fresh fart.

And so I’ve been anxious to see Stereogum‘s metal-only year-end list, as I have been in past years. As usual, this year it’s accompanied by an introductory essay — which this year is especially noteworthy in its own right.

This year’s list of “The 40 Best Metal Albums of 2016” is preceded by a very long and very bleak commentary written by Michael Nelson, which bemoans not only the state of American politics but also the “macro” state of metal (“it’s hard to pinpoint any real positive gains, and all too easy to identify negative developments and trends”), and draws a connection between the two (“metal topographically bears an uncomfortable resemblance to a certain kleptocratic Manchurian Candidate president-elect of questionable integrity”).

The author foresees an imminent downturn in metal’s “domestic profile and economic viability” and expresses the view that “metal today lacks standard-bearers — and maybe even standards — and as such, it fails to meaningfully engage with the culture at large”.

There’s also a long section discussing Metallica‘s new album — which Nelson thought was great when he first heard it, and then radically revised his thinking about it after the presidential election radically changed the context of the music (“To my ears, Hardwired was the sound of four multi-millionaires trying to gin up a convincing simulation of rage for the sake of sounding vital in their final stretch, and it felt immediately irrelevant in a country that was suddenly ablaze with actual rage.”)

By the end, there’s something of a reaffirmation of the value and importance of metal, though it does have the ring of a backhanded compliment. I’ll get to that in a minute.

The Top 40 list was  compiled not only by Michael Nelson, but also by the other Black Market contributors — Doug Moore, Aaron Lariviere, Wyatt Marshall, and Ian Chainey. And apparently, according to Nelson, they “didn’t come to much of a consensus on anything, musically speaking”. According to him, there was even some debate about whether there was any point making a year-end list at all this time.

Obviously, they did, and one of the identified reasons was this: “Few art forms are so free to speak truth to power, so apt to channel rage. And where we’re headed, we’re gonna fucking need that.” And then Nelson identified the main reason for doing the list for one more year:

“Because even though metal had a pretty bad 2016, it still gave us a crazy bounty of great music. We loved this stuff. I loved this stuff. I’ll always love it. Because no matter how bad metal gets, it’s still — absolutely, forever — the best.”

It probably isn’t fair for me to attempt to summarize (only partially) a very long and obviously heart-felt (and heart-broken) piece. I did that because I thought it might tempt you to read the full essay for yourselves (HERE) — because it’s thought-provoking and worth discussing, even though it’s far gloomier about the current state of metal and its future than I think is warranted.

Of course, no one asked my opinion, but I just gave it. The essay comes across to me as the sentiments of someone who has been so staggered and shaken by the surprising (and awful) results of our presidential election that nothing looks good to him, and for whom impending doom seems to cloud the future outlook for… everything… including metal.

I’m just drawing inferences. I don’t really know if they’re right or not. And maybe I’m projecting a little bit too, because I’ve certainly had plenty of days like that since the election, when the ghastliness of what’s happening sucks the joy out of almost everything. But (so far) my own gloominess and disgust over the impending presidency hasn’t seeped into my thinking about the metal that came our way this year. I still think it was a year filled to the brim with amazing music. And I think 2017 will be that way, too.

It also came as no shock to me that Hardwired might be thought of as “the sound of four multi-millionaires trying to gin up a convincing simulation of rage for the sake of sounding vital in their final stretch”, because I came to that conclusion about Metallica‘s music long before this album. Not because I’m more perceptive, just more cynical.

At least to my way of thinking, that band hasn’t been the standard-bearer of metal for a very long time, and neither have any of the other metal bands who (at least briefly) made the Billboard sales lists this year. To me, the standard bearers are the hundreds and thousands of underground bands who most people have never heard of, the ones who don’t even dream of shopping on Rodeo Drive.

We’ll probably never see another Metallica or another “Big Four”, but I don’t particularly care, and I don’t think it will matter to the health and vitality of metal either. The reasons why could be the subject of another post some day, but not this one.

Michael Nelson did identify one negative metal development that is relevant to our LISTMANIA series, and that’s the departure of Brandon Stosuy from Pitchfork last summer (he joined Kickstarter, Inc. to become editor-in-chief of a new web venture called The Creative Independent). Because of him, Pitchfork used to publish an annual list of the year’s best metal releases that was worth looking at, and that I have perennially included in our LISTMANIA series. I assume that with Stosuy‘s departure, that won’t happen this year; Pitchfork‘s list of “The 50 Best Albums of 2016” didn’t include any metal albums at all.

Okay, at long last, let’s get to Stereogum’s best-metal list. It includes a lot of what I also thought were among the year’s best albums. It also includes albums I didn’t listen to, and others that I heard but wasn’t wowed by. But that’s true of every list I’ll see this year, and I expect you’ll feel the same way (to varying degrees) about every list you’ll see, too.

I have to say that I was surprised by the order of the rankings, and especially by the results of the selection process that led to the No. 1 and No. 2 picks on the list. I didn’t expect to see those particular albums at the top of the pyramid, as good as they were. But since I’m incapable of rank-ordering my favorites of the year, or even reducing my favorites to a list short enough to be read in less than an hour, I don’t mean that as a scathing criticism. It makes me want to spend more time listening to them.

And with that, I’ll shut up now and make way for the list — though I hope you won’t shut up, but will instead leave us some comments about this list, or the thoughts in Michael Nelson’s essay, or both. To read the Stereogum writers’ lively comments about each of these selections, go HERE.