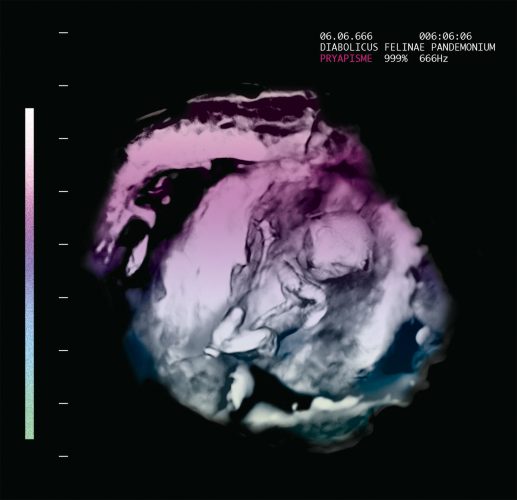 Three years have passed since the maniacal French ailurophiles in Pryapisme delivered their last album, Hyperblast Super Collider. To feed the hunger of their fellow inmates in the asylum, they released morsels of psychoactive sustenance last year packaged in an EP called Futurologie. But now it’s time for another full course. Let us allow the band themselves to introduce what they have done:

Here is our third album : « Diabolicus Felinae Pandemonium », or the story of the birth of the Diabolic Cat who will end the human race. With more than 3 years of work, 10 songs, 57 minutes, 88 GB of audio, 861 tracks, and more than 99% of processor overload, this is our album of the immaturity!

Diabolicus Felinae Pandemonium won’t be released by Apathia Records until February 3rd, but we have been selected as the conduits for a track from the album, an exotic and wondrous taste of the full mind-bending pandemonium that bears the title “A La Zheuleuleu“. 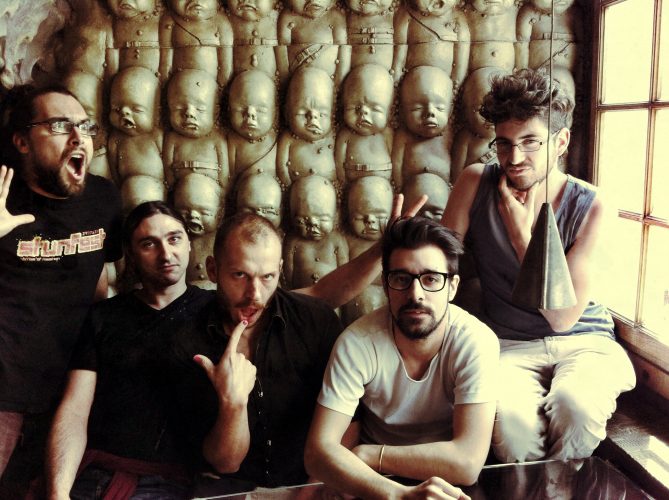 Those of you who are familiar with Pryapisme will have some idea of what to expect, or perhaps more accurately, will be prepared to expect the unexpected. Those who are discovering Pryapisme for the first time can’t really be adequately prepared, no more than a person who awakens in their bed to discover that their room now sits at the top of a rocket about to leave Earth’s orbit. But we will offer a few words anyway.

“A La Zheuleuleu” does include many of the unorthodox ingredients that have been displayed in the band’s previous eclectic and eccentric forays into realms of the bizarre. But as freakish as this particular trip is, there is a devious coherence in its planning. Your head will nod at times; your foot will tap; you may want to leap up and begin to dance. But don’t worry, your brain will also be scrambled, as if nuked in a microwave.

Galloping rhythms segue into bouncing beats and pulsating electro dance cadences. Strange chiptune programming and swirling keyboards are in the mix, along with spooky drifts of ambient sound. Burbling bass notes surface and subside. Pneumatic riffing and inhuman growls have their place as well. A solo begins in maniacal fashion and then becomes bluesy and soulful. And other things happen (you don’t really expect us to try and map this out, do you?).

It’s a multifaceted and multi-textured tapestry that Pryapisme have woven here, with patterns that seem to move and elude the eye’s ability to fix in place. Or, to resort to a different metaphor, the constant changes that occur in the track’s progression make it resemble a soundtrack; It seems to be the accompaniment to a story, even if it’s a story that we can’t yet comprehend.

More strange delights await within this diabolical cat tale. It is perhaps worth mentioning that several guests will be present on the record, including Adrien Daguzon (Zibeline) on saxophones, Mathieu Halberstadht (Please Lose Battle) on double bass, and several real cats for backing vocals.

You can get in line now for the full experience. Pre-orders can be placed at this location: