We begin with a new album named LI_E by the one-man Romanian project Gravatus, which was released on November 12. This was my first exposure to the music of Gravatus, but I’ve found myself enthralled by LI_E.

The opening track “Inchoation” haunts like a ghost story told by ghosts, their presence sensed through a chill on the neck, but not seen. Classically influenced strains of symphonic melancholy emerge from the ambient sounds, as a way of beginning the unsettling spell that the album casts. Things get heavier and harsher after that in the album’s remaining five tracks, yet there remains a dark, haunting air about the music, even in its most frenzied bouts of agony and despair.

Classical elements also persist, with instrumental interludes of piano and strings adding their plaintive and anguished tones to the album’s unfolding movements. Though complex and unpredictable, and as often discordant as moodily melodic, the songs have a way of seizing and holding attention, coiling and uncoiling the tension in your head like a winding spring.

LI_E is a free download at Bandcamp. The album stream is set to begin with the third track, “Infandous Works”, and if you’re of a mind to sample what you’re getting yourself into, that’s a good place to start — but be sure to experience the contrast between the end of that song and the sublime beginning of the next one (“F”), which eventually becomes a conflagration of torment and grief. 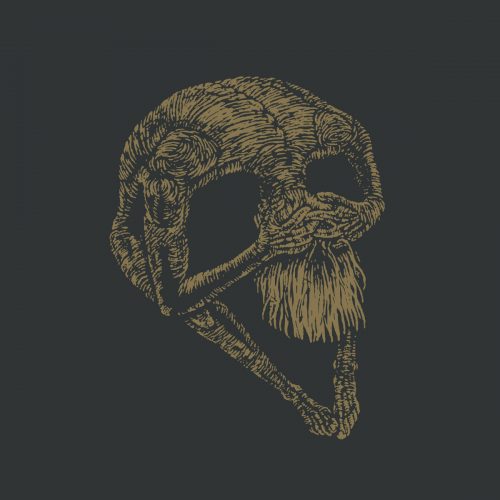 Apognosis is the first of two projects from Athens, Greece, featured in this collection. This one happens to be one-man band, with a debut album named Phase 6 that’s set for release on December 25 in a three-panel digipak CD format via Ars Marginalia. Though the album isn’t released yet, it’s available for streaming now.

The introductory riff in the introductory track rings like a warlike fanfare, and it’s so piercingly vibrant that it speared my head immediately. Yes indeed, “Divine Seduction” is an apt name for that track — its violent charms seduced me into exploring the album as a whole.

“Divine Seduction” reveals not only Apognosis‘ talent for crafting irresistible riffs and propulsive rhythms, but also a propensity for lacing the music with eerie, dissonant guitar  sorcery and for crafting musical journeys that follow unpredictably branching paths — sometimes soaring in glorious triumph, sometimes bearing down with knives out and grim butchery in mind, sometimes presiding over solemn, incense-shrouded rituals beneath the vault of gothic arches.

The album displays a masterful ability to create changing moods with a constant ebb and flow of energy and pacing, and to maintain a firm grip on the listener’s attention by integrating progressive-minded flourishes along with loads of killer riffs and flesh-rending vocal savagery. (Very cool bass work, too.)

I should probably spend more time with this album before calling it “brilliant”, but that’s the word that’s on the tip of my tongue at the moment. 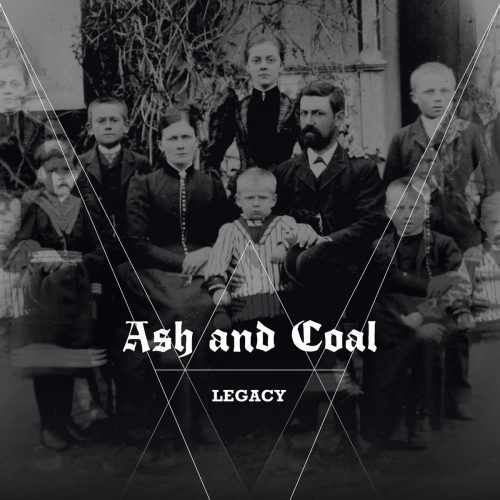 The next item in this collection is an outlier of sorts — first, because it’s a single song, and second, because it stretches the stylistic boundaries of the Shades of Black series. Actually, it probably isn’t within the boundaries at all, but I’m so taken with the song that I didn’t want to delay spreading the word about it.

The track is “Everyone’s A Misanthrope”, and it debuted today both on Bandcamp and through a music video. The band is a Swedish group called Ash and Coal, and the song comes from their new album Legacy, which will be released on February 18 by ViciSolum Records.

Ash and Coal name such diverse sources of inspiration as Danzig, Thåström, Nick Cave, and Fields of the Nephilim. This highly addictive song in particular is a dark concoction of ingredients one might identify as punk, post-punk, and crust, among others, and I get vibes of Amebix from it — due in part to the gripping vocals, which have a rough, unvarnished quality that conveys a life scraped raw by disappointment and rage. What a hell of a good song!

Legacy is available for pre-order here: 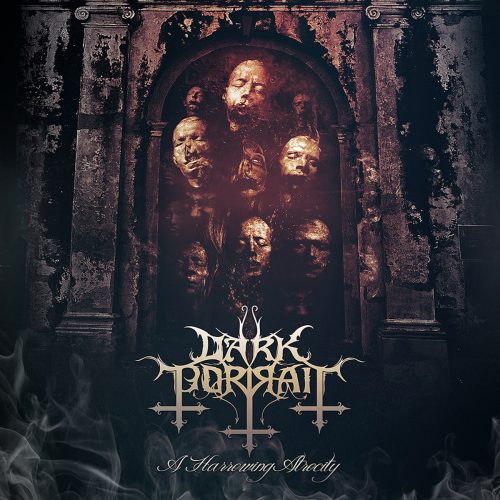 Now we come to the second Athenian band in this collection, Dark Portrait. Their debut album A Harrowing Atrocity was released on December 13, and many (though not all) of the songs are streaming on Bandcamp.

The Bandcamp stream is set to begin with the title track, which comes next-to-last in the running order. It’s a good place to start, if your aim is to hook people in the gills without delay. It’s a theatrical, bombastic, majestic display of symphonic black metal that still holds a knife edge of savagery against your throat, thanks in part to the impassioned demonic bestiality of the vocals and the heaving heaviness of the low-end instrumentation.

If you enjoy that song, then you’re in for a very satisfying trip through the rest of the album. All the songs include powerful melodic hooks, along with a rich array of musical textures, from the body blows of jabbing grooves to overlays of sweeping orchestral grandeur, from mystical meditations to barbarous charges — and choral voices also appear alongside those explosions of ravenous rage and hate.

Powerfully catchy music if you have a taste for symphonic metal with an aura of infernal threat hanging about it like a cloak of thorns. 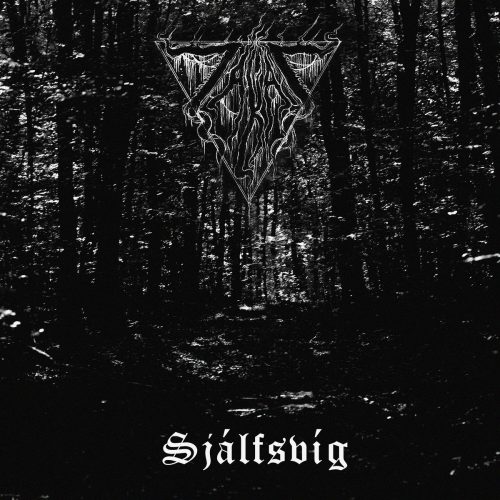 As I explained only yesterday, I’m drawn like filings to a magnet by bands from Iceland, even if I’ve heard none of their music before. I suppose that’s because I’ve been so rarely disappointed, but also because the sheer volume of good bands from such a small country remains a wondrous phenomenon. This particular band is a one-man project named Zakaz, whose creator prefers to be known only as I. The latest Zakaz release, which appeared on December 12, is an EP named Sjálfsvíg.

After becoming thoroughly unsettled and yet mesmerized by the EP, I did a bit of research and found an interview of Zakaz, from which I’ve excerpted this answer as an introduction to the music:

“The main musical influences of ZAKAZ lie in the deep spectrum of music that I am exposed and listen to daily. Just to name a few: ZAKAZ is influenced a lot by early black metal bands such as BATHORY, DISSECTION, BURZUM. As well as newer bands like MGŁA and OBSEQUIAE. But the main influence comes from classical European and ancient Icelandic folk music. “Tvísöngur” (literally: twin-singing) is a type of Icelandic voicing and that has partly influenced my writing style.”

There is indeed a sweeping, symphonic quality to the way the dense layers of guitar and keyboards move in stinging waves across a song like “Tekur”, generating an atmosphere of catastrophe, or at least desolate bleakness. There’s more of a rocking riff and a bounding beat at the heart of “Brátt”, but it’s no less dark and oppressive, thanks in part to the searing extremity of the vocals and the somber guitar interlude that segments the track, just before a reprise of the kind of symphonic sweep and rapidly blasting snare sound that marked “Tekur”.

The rapid patter of the snare drum may take some getting-used-to, as it runs along on the surface of the dark, massive, heaving and raking riffs and the panoramic keyboards, but the overall effect of this dramatic music is still immersive — and frightening.

The wild, inhuman vocals alone are enough to give you nightmares. When combined with the cold, supernatural aura generated by the instrumentation, they create a sense that by entering the realm of Sjálfsvíg, you’ve left our world far behind, and along with it, all hope. Even the dreamlike keyboard instrumental that closes the album is chilling enough to congeal the blood in your veins. 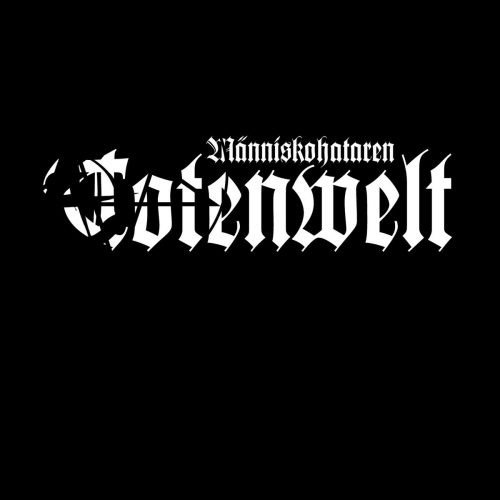 To conclude this two-part collection of music that’s (mostly) in a blackened vein, I have the second release by a Swedish band called Totenwelt. The name of this EP is Människohataren, and it was released on November 26.

After the petrifyingly frightening ambience of that Zazaz album, this EP seemed like a good complement. It’s frightening in its own way, with a thoroughly ominous and pestilential cast to the melodies, though it’s more often a seething, storming slice of grimness.

With the lyrics apparently voiced by goblins who’ve lost their minds (or developed a strong hunger for human flesh), with flickering guitar leads that are often equally demented, and with a drive train propelled by riveting drum work, the songs are manifestations of cold-blooded ferocity.

And yet the first and second tracks are built around icy cores of somber, emotionally affecting melody (sometimes enhanced by ambient synthesizer overlays) that grow increasingly powerful as the minutes pass, and stick in the head after they’ve run their course. The middle track is simply black as night and as horrific and devastating as the unearthing of a mass grave.

A highly accomplished short release that should make us eager for more dark sorcery from Totenwelt in the future.